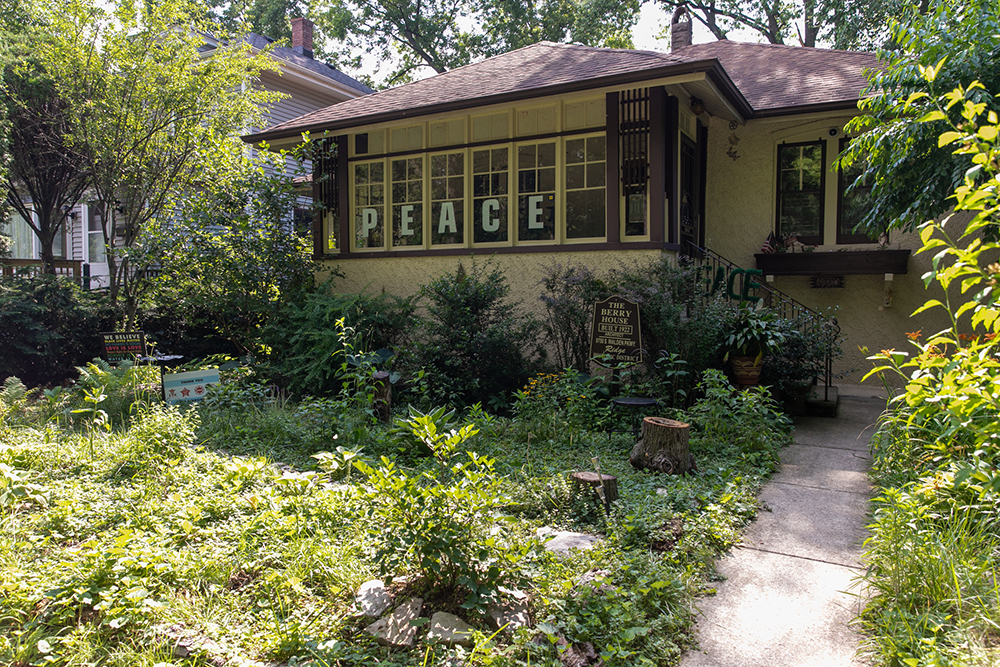 The Ridge is known for its variety of picturesque houses, large and small. This year, an interesting Craftsman-style cottage is celebrating its 100th birthday. With only about 500 square feet of original living space, the James W. Kendrick House at 9750 S. Walden Pkwy. is Beverly/Morgan Park’s version of a “tiny house.”

One of the unique features of the house is its building material, described as “stucco on hollow tile.”  These tiles, also known as structural terra cotta blocks, are unglazed, baked clay blocks made from molds, basically a shell with a center of hollow spaces reinforced with clay webbing. The outsides are covered with grooves or ribbing which helps plaster, mortar, and stucco adhere to the blocks.

Terra cotta is the same material used for flowerpots and decorative moldings, but the design of the blocks gives them considerable compressive strength. These fire-resistant blocks were used as a less expensive alternative to bricks from 1900 to 1940 for some residential, military, and smaller commercial buildings. Since they were easy to cover with stucco, they were popular for architecture styles like Mission revival and Mediterranean.

The original house at 9750 S. Walden Pkwy. was built as a square with four rooms and a small bath. The cellar was entered from outside and there is an attic crawlspace. The porches and a small second bedroom were added later.

Kathy Konopasek, the current owner, bought the house in 1989. She is only the fourth owner in the house’s history, and she has lived there the longest.

The house was built for James Wallace and Mary Jane Givens Kendrick. James was a salesman with Carson, Pirie, Scott, and Co. Mary Jane was descended from Archibald Curry from Scotland who fought as an American patriot in the Revolutionary War. The Kendricks appeared to have built their “tiny house” as a retirement cottage and celebrated their 50th wedding anniversary there in 1928.

In the 1930s, ownership passed to George A. and Ella May Stadler Weimer. George was a clerk with the Rock Island Railroad. In 1965, the house was purchased as a retirement home by Harold and Binda Berry, who moved from East Peoria, where Harold worked for Caterpillar.

Konopasek, a native from the “Heart of Chicago” area at 24th Street and Oakley Avenue, became enamored with Beverly/Morgan Park and moved here in 1985.

“I discovered Beverly when I worked at St. Xavier University as an assistant professor, and I wanted to be part of this community,” Konopasek said.

Konopasek moved into a house across the street from the Berrys, and befriended the elderly, childless couple. She started helping them with medical appointments, paperwork, and other tasks and eventually moved in as a caretaker for Harold after Binda died. When Harold died in 1989, she purchased the house from his estate. She also adopted the Berrys’ dog and cat.

Like any older place, the house had its quirks. There was only one fuse for the entire house and there were seven layers of roofs. The fireplace was sinking into the cellar and was not even connected to the outside chimney. The garage was falling down. The basement was filled with unused furniture from the previous owners.

“The house was in pretty bad shape. I was advised to knock it down, but I said, ‘No, I love this house, it’s perfect for me,’” Konopasek said.

Restoring the house became a labor of love for Konopasek, who did much of the work herself, including digging the 70-foot-long trench for the electrical wiring. And she has incorporated art to add to the house’s identity, including stained glass window covers and a mural of an English garden on the garage wall.

Konopasek’s family and friends call this her “miracle house.” It is the base of operations for Konopasek and her two “rescue” dogs, a Rottweiler/Shepherd mix named Gucci and a Maltese named Omi.

Konopasek, whose career took her to the Chicago Public Schools where she retired as principal of Stevenson Middle School in 2016, is known in the community for her civic activism and commitment to social and environmental causes. She converted the front yard of her house and the parkway to a Monarch butterfly waystation garden as part of BAPA’s Save the Monarchs initiative.

“I’m so blessed to be here. My blood, sweat and tears are in this house. In a way, I saved the house and it saved me. I’m glad to see its story recorded,” Konopasek said.