You are here: Home1 / The Villager2 / Community History3 / The Boy Scout Heart

On June 10, 1929, a train crew employee for the Grand Trunk Western found a young boy lying along the railroad tracks in Palos. The boy was dead. His body was taken to the nearest undertaker and after a time was moved to the county morgue. The boy’s body remained there, unidentified, for 22 days. The only hint to the boy’s identity was a Boy Scout emblem pinned to his sweater. Over the next several weeks, hundreds of parents of lost boys came to the morgue to see if this boy was their son. Nobody could identify him.

About a week before the boy was scheduled to be buried in a potter’s field, a Beverly/Morgan Park resident, municipal Judge Donald McKinley, learned of the tragedy and, the Boy Scout emblem on the boy’s sweater. He decided to make sure the boy received a proper burial with Boy Scout honors. McKinley’s son, Donald Jr. was a boy scout with Troop 607 sponsored by Bethany Union Church on 103rd and Wood streets.

Hours before the body was released for the funeral, a woman, Jennie Colburn, saw the boy’s picture in the newspaper and came to the morgue, She claimed the boy as her 12-year-old son, Clarence Fredenburg.

Two years before Clarence’s death, Colburn and her husband had divorced. Colburn couldn’t care properly for her three children, and they were sent to live with relatives. Clarence ended up on his uncle’s farm in Marshall, Mich. as a chore boy. When his mother visited, he complained of his unhappiness and the cruelty he endured at the hands of his father, who lived near the farm. Clarence confided his dearest ambition was to be a Boy Scout, but he didn’t have any money. His mother comforted him and promised she would find the money so he could join the scouts. She also promised she would send for him to live in Chicago with her. Colburn received a letter from her son shortly before he ran away, saying he was homesick and wanted to be with his mama. In the letter he also wrote he had submitted an application to the boy scouts.

Clarence was trying to get back home to his mom, when he was either struck by or fell off a Rock Island train.

On July 3, 1929, the scouts left their headquarters at Bethany Union Church at 2 p.m. to go to Mount Hope cemetery. Mrs. Colburn took street cars from her home up north— a 2½ hour journey — and arrived at the cemetery alone.

Eight members of Troop 607, William Boardman, Theodore Dahlstrom, William Geist, Albert Owen, Donald McKinley, Edward Radius, John Schwarz and Richard Smith carried a small white casket draped with an American flag, a troop 607 flag, and scout banners.  In a short burial service given by Rev. McGee he stated, “We do not know if this lad was actually a Boy Scout, but we do know he was a Boy Scout in spirit. He had our ideals. His story will make us remember to be thoughtful to boys who haven’t the advantages we have.”

The casket was lowered.

Do a good turn daily, is one of the scout mantras. During this time, the Boy Scouts of Troop 607, live that mantra.

Troop 607 is still sponsored by Bethany Union Church. In May, the troop will turn 100 years old. This story is the beginning of a yearlong celebration that will culminate in a 100–year party on May 22, 2021. The boys of the current troop have the large shoulders of past scouts to stand on, as they continue to “Be Prepared” and to “Do a good turn daily.”

If you or a family member were a scout or leader in Troop 607, join their Facebook page, Bethany Union Church Troop 607 100th Anniversary, to share scout stories, connect with old friends, and attend the 100 year celebration in May. For information on joining the troop, contact Mark Murphy, mamurphy@comcast.net. 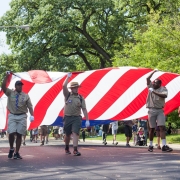 Yesterday and Today: The History of Troop 607 Boy Scouts