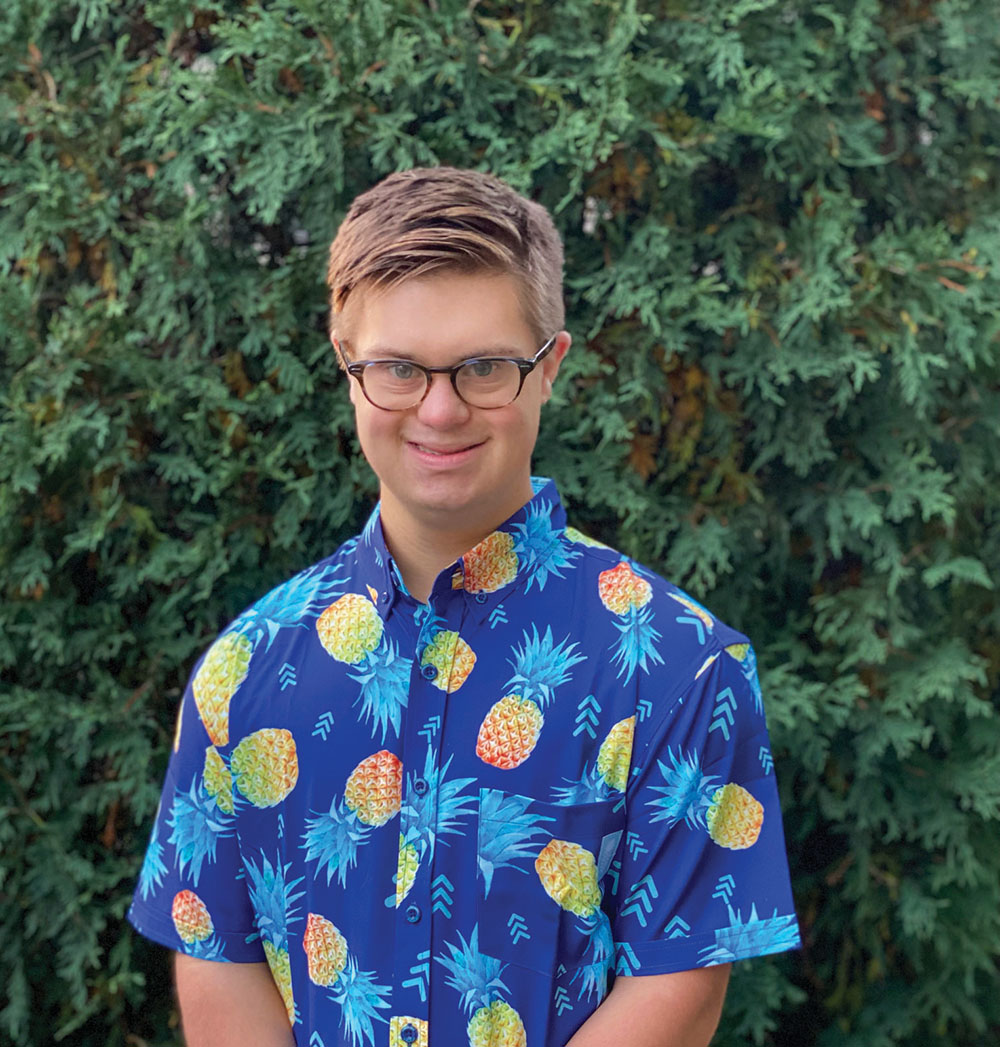 Nate Simon is a man of many talents. A comedian, a fashion model, a multisport athlete, and now the CEO of 21 Pineapples, a clothing line dedicated to changing the way others perceive people with Down Syndrome.

Nate was diagnosed with Down Syndrome at birth, which was a moment his mother, Holly Simon, recalls in a blog post on 21Pineapples.com.

“Instead of the congratulations that I had expected, I heard, ‘I’m sorry.’,” Holly wrote. “Sorry for what? … We were filled with what he won’t do … we even received sympathy cards in the mail. We all promised Nate that he will be treated just like everyone else … Nate has proven EVERYONE wrong.”

Nineteen years later, Nate has not only proven everyone wrong, but he has excelled in everything he sets his mind to. He has won more than 100 medals in the Special Olympics, has modeled during Fashion Week in Los Angeles, and he confidently creates shirts and accessories to spread his message of love and acceptance.

Holly says that in the first few months since 21 Pineapples’ launch, the company has already made close to $1 million in sales.

“The inspiration behind 21 Pineapples is incredibly organic. Nate has grown an audience that adores the fact that he spreads love wherever he goes,” Holly said. “I reached out to a great friend by the name of Officer Daniels, who is a social media comedian. When I told him I wanted to start a business he immediately thought we should do Hawaiian shirts because Nate loves wearing them.”

Within three days of that conversation, 21 Pineapples was created.

Holly’s oldest child, daughter Lindsey, came up with the company’s name. “21 represents the extra 21st chromosome kids with Down Syndrome share. Pineapple came about because it’s a sign of welcoming and they have their own crown – and we all deserve to wear our own crown,” Holly said.

In addition to the Hawaiian shirts, 21 Pineapples sells a variety of apparel and accessories with the motto “Be a Good Human” on them. Nate also designed a series of shirts to celebrate World Down Syndrome Day, and he was chosen to design a t-shirt for this year’s Chicago Polar Plunge, a fundraiser supporting Special Olympics Chicago and Special Children’s Charities that will be held Mar. 6.

A percentage of all sales at 21 Pineapples goes directly to support Down Syndrome organizations throughout the world.

Nate’s goal is to change the world with love.

“Nate makes friends wherever he goes because his love is real and incredibly infectious. Kids like Nate do not see color, size, and they don’t care about what’s in your pocket — they just want you to be kind to them and in return they will be kind to you,” Holly said. “Love is the answer for Nate because literally that is all the world needs, especially now.”

With the help of his sister Lindsey’s incredible TikTok following – more than 320,000 followers and 9.9 million likes — Nate is able to share his love and hilarity with others.

“Nate and Lindsey are the youngest and oldest out of my five children. They have such a great relationship and Lindsey, as the oldest, helped raise Nate. Nate’s three brothers are equally as close to him. Nate’s comedy is so organic; he used to watch Saturday Night Live and memorize certain comedians. Now, his timing is on point and he absolutely kills people with his humor,” Holly said. “Sometimes Nate doesn’t even realize he’s being funny because he’s so honest and open and quick-witted, and within minutes he will have anyone belly laughing.”

The whole family is excited about the success of 21 Pineapples and its future growth; a few country music celebrities are interested in getting involved in the company’s mission.

“We know this is something that’s going to be gigantic, and we know with Nate’s love that we are going to change the world one funky Hawaiian shirt at a time.”

To find out more and place an order, visit 21Pineapples.com.