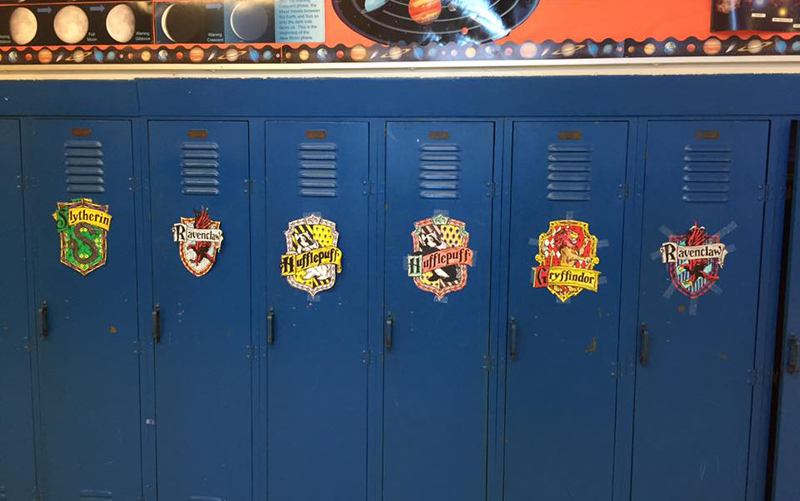 It’s not every day that kids in Beverly/Morgan Park make exploding troll toothpaste, play Quidditch, or drink butterbeer at school. Unless, that is, they go to Sutherland Elementary. For one magical week, the entire 5th grade was transformed into Hogwarts School of Witchcraft and Wizardry.

A group of parents, teachers, and administrators teamed up to recreate the world of Harry Potter. The celebration, planned in secret with the code name Project HP, was unveiled the week before the holiday break.

“Principal Steinmiller was so open to the idea, he green lighted the plan for the entire week and told me to run with it—which are some of my favorite words to hear!” said parent Becca Blue, who led the planning efforts. “With the aid and ideas and commitment of a handful of parents, whom I called Dumbledore’s Army, we began to plan. The willingness of the administration, plus super supportive parents and teachers, resulted in magic.”

At the beginning of the week, Blue’s small army of parent volunteers wore black Hogwarts robes and greeted unsuspecting students as they arrived at school. Classroom doors were decorated to look like Platform 9 ¾. Students were surprised to learn that they had been accepted into Hogwarts School of Witchcraft and Wizardry but needed to hurry, as the Hogwarts Express was about to depart. Then they took a quiz to be sorted into one of four houses from Hogwarts and received house ribbons to wear each day, plus crests to decorate and put on their lockers.

At one point, Principal Eric Steinmiller reportedly caught a troll in the basement. Students celebrated by making troll bogeys (aka green slime).

The project culminated with a party in the gym, which was transformed into the Forbidden Forest, complete with a fog machine and a photo booth for taking Azkaban mug shots. Students were treated to butterbeer, a butterscotch cream soda. And they played games such as “Care of Magical Creatures,” “Transfiguration,” and “Which Witch.”

Students who weren’t familiar with Harry Potter learned a lot about the fiction series and some said they were inspired to start reading the books.

The celebration attracted plenty of interest from other Sutherland students and parents. Blue heard from a number of 4th grade parents who said their children are looking forward to Harry Potter week when they are in 5th grade. “So perhaps a tradition was created,” she said.

Blue has a second grader and a kindergartener at Sutherland, in addition to a 5th grader who is a Harry Potter fan. (Coincidentally, first year Hogwarts students are 11 years old, the same age as 5th graders.) Blue said she is prepared to recreate Hogwarts again, alongside her talented army of parent and teachers. “I’ll have my wand at the ready,” she said.

Mr. Steinmiller praised the imagination and commitment of Ms. Blue and the other Sutherland parents and teachers in Dumbledore’s Army. “They took a vision for Project HP and made it a learning experience at Sutherland that our 5th grade students will never forget,” he said. “I will do my best to keep a keen eye on the troll in the basement, until next year.”