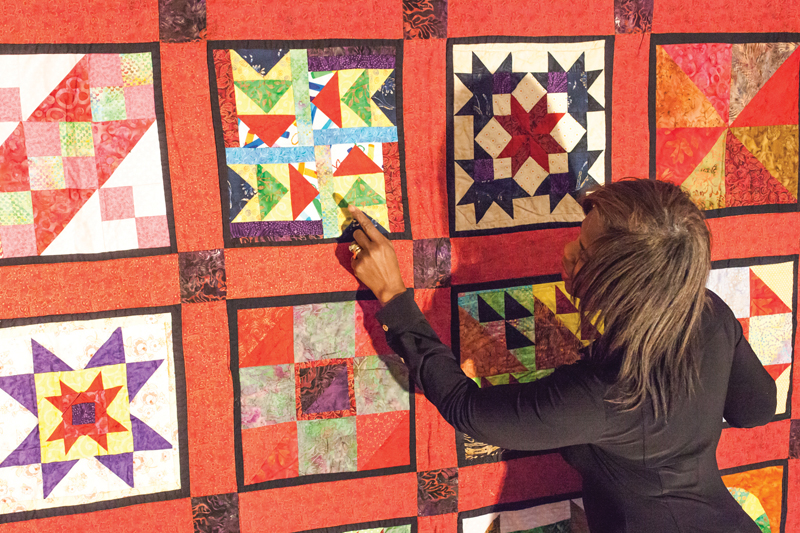 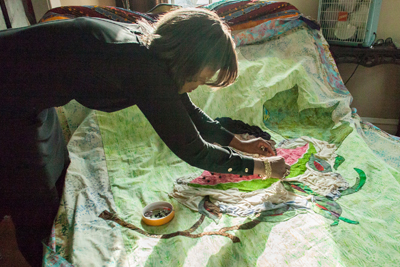 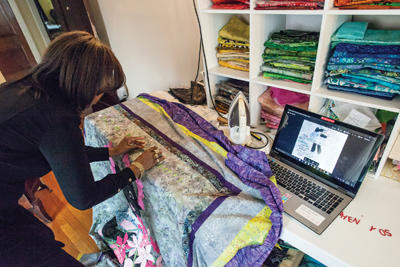 Dorothy Straughter stitches lessons from African American history into vibrant quilts that are more about storytelling than warmth. She sews images from issues that are difficult to address into the very fabric of her art, challenging viewers to face the realities of racism from the past, and to never let history repeat itself.

“Art is a way to have the conversation without the anger,” she said.

Straughter, an Occupational Therapist who works with children under age three, has a master’s degree in biology. Except for and stab at making an outfit for a Junior Miss pageant that won her a Simplicity sewing contest when she was a teen and taking an art appreciation class in college, Straughter said that, “Nothing in my background said I was going to be a quilter.”

A few years ago, Straughter’s neighbor, Marcia Thomas, made an Underground Railroad quilt. “I had never seen one,” Straughter said. “I didn’t know what it was. The only thing I was taught was that my ancestors were slaves. Nothing else.”

Straughter began studying Underground Railroad and the role quilting played in helping slaves as they made their way to freedom. While she studied, she made a baby quilt to see if she could do it. It turned out well, so she set her sights on more meaningful projects.

In 2014, she completed her first art/history piece, her own version of an Underground Railroad quilt. On one side the squares are patterns like those used to guide and inform runaway slaves during the Civil War era. The images seem merely pictorial, until you look more deeply. Messages are embedded in the patterns: bread baskets signifying need to bring food, symbols that indicate whether a place is safe or dangerous, scenes that tell runaways the best times to travel, and which way to go. The back of Straughter’s quilt depicts the primary transatlantic slave trade routes.

Another of her amazing quilts tells the story of the Great Migration. The intricate images from African American history include the African Masai tribe selling people from other tribes to Europeans, picking cotton, the bonds of slavery, lynching, fighting in World War I for country in which they were not welcome, trains that transported people out of the south, and life in Bronzeville when people finally had some leisure time. On the back, Straughter stitched the Great Migration the routes through the United States.

“I used to hate history when I was a kid, hearing that we were slaves,” Straughter said. Her determination to become better informed about her rich culture and history led her to the Stony Island Arts Bank research library. There she researched black history and the vital role quilts had played among enslaved people who had been kept illiterate. And, she discovered the Edward J. and Ana J. Williams collection of what Theaster Gates termed “negrobilia” — racist objects that the Williamses bought in order to take them off the market.

“I started looking at the objects and became very moved,” Straughter said. “I felt pain, but I was also empowered that people could endure this and still move on and do something with their lives.”

Straughter began using some of the overtly racist images from the collection to make quilts. Many of the images came from ads and greeting cards from late 1800s through early 1900s. As an artist, she adds some beauty and dignity to her renditions. When you look closely, fabrics and patterns put Straughter’s vision into stories the quilts tell. “In the Jim Crow era, the images became more grotesque. Some people are appalled that I put this out in quilt form, but I feel that art is healing to race relationships in America.”

Straughter devotes a lot of time to her quilts. Each one has a front and back that require painstaking detail. Because she does not work from pattern books, she needs to translate the images from paper to fabric, and create all of the many individual pieces.

She knows that art can be transformative. Because her house is on the route of the breast cancer walk, she made a quilt to honor survivors and friends lost to the disease. People sign it and leave notes as they walk by, transforming the quilt into something that’s truly more than the fabric and thread. “It’s very humbling,” she said. “I never expected it would be so meaningful to people.”

Straughter’s evocative work is being recognized in two upcoming exhibits.

Straughter’s Great Migration quilt will be debuted at the Beverly Arts Center in April, as part of A Constant Struggle: Systems of Injustice. Also featured in the exhibit are ceramicist Dawn Liddicoatt and painter/sculptor Jomo Cheatham. The curator is Sal Campbell.

Straughter’s commitment to her art and its messages comes straight from her hope that frank, productive conversation can be inspired. “We’ve got to do better as people,” she said.