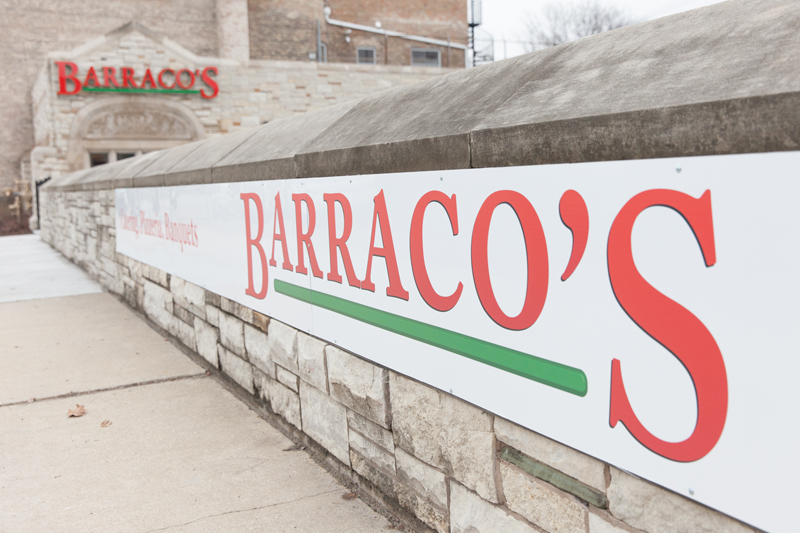 Barraco’s Beverly/Morgan Park location is open for carry-out and delivery orders, and hopes to open its dining-in section in February. Located at 2105 W.  95th St. in the old library property, plans also call for banquet options for up to 60 people. This is the family-owned restaurant chain’s seventh location.

The new Barraco’s location will offer either dining-in or banquets, depending on the specific need for that day. “It’s all one space; if a banquet is booked one night, we direct our customers to our sister store on 111th Street in Mt. Greenwood to dine-in,” said Fran Barraco.

All of the neighborhood’s favorite dishes will be available at the new location. The extensive menu ranges from appetizers to desserts, and features pizza, Italian and American entrees, sandwiches and salads.  “The new space is basically a duplicate from our 111th Street location, but on a smaller scale,” Barraco said. “It’s going to be really great for our Beverly customers.”

The Barraco family worked with Ald. Matt O’Shea for the last couple of years to bring the Southside favorite to 95th Street. “People have been calling and waiting for us to open. It’s closer, within walking distance for our customers, which makes it even easier to pick up your food,” Barraco said. “Even though our dining room isn’t officially opened yet, it’s easier for our North Beverly customers to make it here than our other locations.”

Another perk is the ability to serve alcohol at this location. “We have a small bar area, offering a full bar of drink choices,” Barraco said. “We’ll have about eight seats at the bar, so it’s perfect for anyone picking up a pizza to enjoy a cocktail or beer while they wait.” A parking lot with ample spaces is next to the building, so no need to fight for a spot on the street.

The restaurant is accepting applications for wait staff, bartenders and people to answer the phones. “It’ll be great for the kids from the neighborhood to work here,” Barraco said. “It’s really exciting to be closer to Western Avenue in this part of Beverly.” she said.

Customers can order carry outs online (don’t forget to check for coupons!) at www.barracos.com or call 773-881-4040. The new location is open seven days a week. 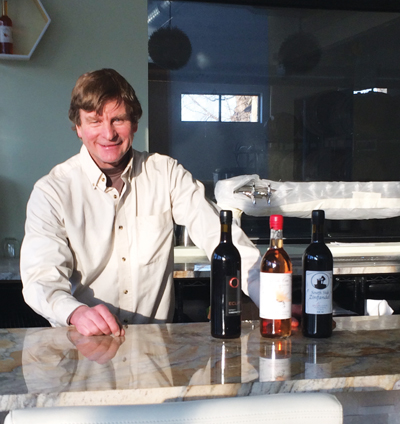 will open in a long abandoned building just across the way from the 91st Street Metra station, on the very edge of the 21st Ward – which is “wet.” The vision of Greg Fischer, owner of Bev Art Brewer and Winemaking Supply on Western, and a master brewer and winemaker himself, it will be the first meadery in Illinois.

Fischer is the perfect person to open a meadery. He has 30+ years of wine experience and he has been making the honey-based beverage for many years using honey from his own bees. Originally providing the beverage to a local market, he now sells the Wild Blossom mead throughout the United States. Many of Fischer’s meads have taken International gold medals at the Mazer Cup, the international mead competition held in Boulder, Colo.

“Mead is really versatile,” Fischer said. “It can be dry, it can be sweet. It’s the first fermented beverage.”

The new meadery is versatile too.

One end of the building has been transformed for production for a variety of wines, meads and honey-based craft beers. According to Fischer, he produces about 3,000 gallons a year at his current location, and that can go up to 20,000 to 30,000 gallons at the new site.

The heart of the new meadery is the light-filled tasting room and classroom. Patrons will have plenty of room to engage in wine-making and mead and beer brewing classes. The tasting room features a granite-topped bar and ample seating at tables, as well as space for retailing beverages and beverage-making supplies. A service kitchen will make it easy to cater special events and offer light fare. Fischer is working with the Great American Cheese Collection to serve artisan cheeses. He is also talking to chefs and food truck companies on ideas for fun and delicious pop up food services.

Once the tasting room opens, Fischer will focus his attention on installing a patio for outdoor seating, and landscaping that will enhance a natural setting. With the forest preserve right across the street and a large swathe of open space behind the building, Fisher is working with the Cook County Forest Preserve District and Chicago Botanic Garden on plans to plant wild flower gardens.

Since 1966, Ken’s has been serving classic American and Italian food. Opened by late Ken Courtright, the popular neighborhood spot served the southern Italian dishes that his wife, the former Sally Casto, learned to make at the restaurant her family operated years ago in Brainerd. Many of those dishes are still on the menu today, alongside exciting new offerings introduced by Sally and Ken’s grandson, Mike Courtright.

Ken’s, 10522 S. Western, is about family, tradition, food, libations, classic favorites, and great times with close friends. Open until 10 p.m. seven days a week, you can make reservations by calling 773-238-0234. Keep up to date with menus and more at Ken’s On Western on Facebook or at kensguesthouse.com.

Ours is a neighborhood that loves and hates change. Among the things that are not to be changed are the chicken salad, cheese balls and potato salad at Swanson’s Beverly Ritz Catering and Deli, 2414 W. 103rd St. Now that that’s perfectly clear, the neighborhood welcomes Greg Dix and Todd Thielmann as the new owners of this favorite local eatery. They took over the deli at the end of December, and so far, their biggest changes include accepting credit cards.

The partners met as boys at Sutherland School, parted ways – as kids do – then came together again when they married cousins. They’ve partnered before: in 2010, they won a competition for their barbecue sauce, called Soggy Butts.

Thielmann formerly worked at the Chicago Board of Trade. Dix, who has a background as a chef, began his cooking career at Swanson’s in 1987 before moving to jobs at restaurants as diverse as Disney’s Grand Floridian Resort, and in downtown Chicago at the Hyatt and Sheraton hotels. Close by, he worked at Maple Tree Inn and helped open 115 Bourbon Street. He has been working in the deli since 2015, learning about the business from the former owners, John and Tricia Rusch. Find more about plans for Swanson’s Beverly Ritz on Facebook.