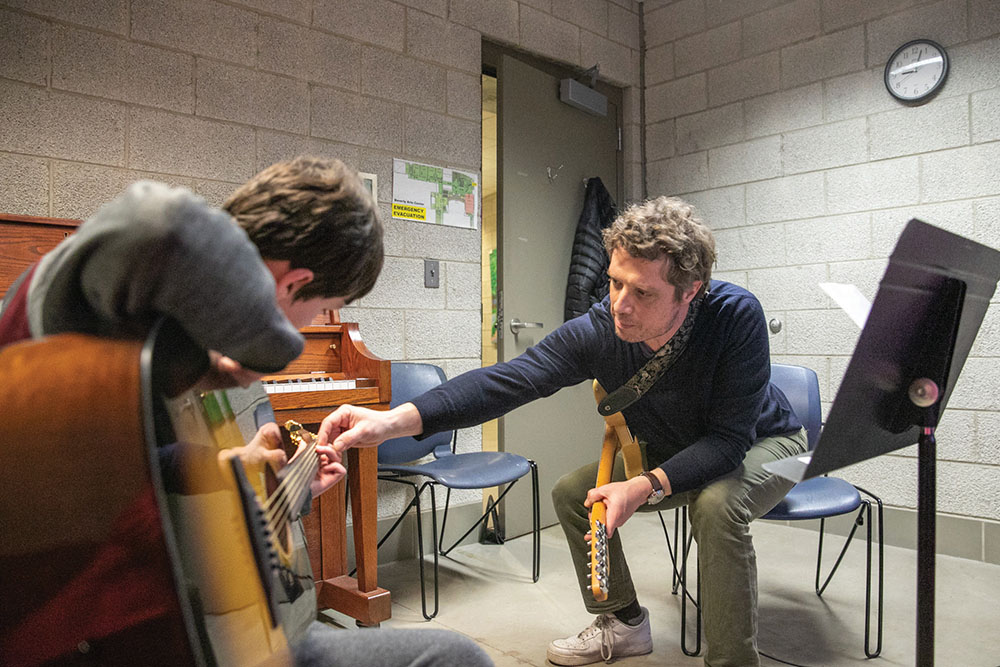 Guitarist and Beverly/Morgan Park native Mike Vanier says “yes” to every job offered. His love for his craft is driven by playing in numerous musical genres and sharing his talent and passion for music with others. Now, Vanier will be sharing his guitar talents at the Beverly Arts Center, 2407 W. 111th St., as a private guitar teacher for students ages 10 and up.

“My teaching philosophy is varied depending on the ages and abilities. I spend a lot of time assessing where my students are at and what they’re trying to get out of the experience,” Vanier said. “I challenge them, but also make it fun and let them grow and have a good time. Sometimes, I’m the first person a student has performed in front of; that’s a great feeling.”

After attending Christ the King School and Mount Carmel High School, Vanier headed to Berklee College of Music in Boston, Mass. He graduated in 2000 and earned a spot in the orchestra pit for a national tour with the musical “Footloose.” Vanier made his way back home to Chicago in 2002, where he’s been performing with numerous bands and teaching guitar ever since.

“Touring with ‘Footloose’ reminded me of my history growing up with the Beverly Arts Center, where I played guitar in the pit for the plays ‘Jesus Christ Superstar,’ ‘Godspell,’ and many others,” Vanier said. “Playing in a nationally touring musical was nonstop; we played eight shows a week, including two performances each on Saturdays and Sundays. There were many one-night performances where you get up and go afterwards; there were many late nights and early mornings. But when you’re 21 and filled with youthful energy, it’s the best experience.”

Vanier began teaching guitar to people of all ages once he resettled in Chicago’s Ukrainian Village neighborhood. One day, one of his students, Beverly/Morgan Park resident Willie Winters, asked Vanier to volunteer for a special project at the Division 11 of the Cook County Jail for its Jail Guitar Doors USA program. This program was launched in the U.S. by Wayne Kramer, a guitarist with the rock group MC5, who spent time in federal prison for a drug-related charge. Kramer began the program as a way for inmates to use music as a tool for expression, with the hopes it will change behaviors down the road. Jail Guitar Doors donated 10 guitars to the Cook County Jail 8-week program, which had 300 incarcerated men on the waiting list.

“It was an amazing experience to see how appreciative all the inmates were that I was giving my time to them,” Vanier said. “They were respectful and anxious to learn; they couldn’t believe someone was there helping them out. It was a very transformative experience.”

Vanier is the guitarist for The Leadfoot Band, which is kicking off BAPA’s Porch Concert series on Fri., May 13, 6 p.m., at the Ridge Historical Society, 10621 S. Seeley Ave. The band has been together since around 2002 and is composed of many Beverly/Morgan Park residents. The band has two albums, “The Leadfoot Band” and “Cannonball,”and is described as a bluegrass band with influences of rock, funk, and everything in-between.

Vanier also plays guitar for Second Hand News, a Fleetwood Mac cover band, and the Ron Burgandies, a yacht rock band that he describes as “a crazy spectacle.”

Playing in so many bands and teaching leads to a frenzied schedule for Vanier, but he loves the challenge of playing in different genres with different groups of people.

“It’s really fun to go to different styles of music; I get bored staying in one thing for too long,” he said. His ability to adapt to any genre is a plus for his students as well, as he can lead them through various styles of guitar.

The BAC is excited to have Vanier on board in addition to a cadre of intensely talented artists, musicians, and actors. “The Beverly Arts Center continues to provide the most diverse and comprehensive menu of arts courses on the South Side,” said Kevin Pease, BAC Artistic Director. “We cater to students of all ages and ability levels six days a week, 46 weeks a year. Teaching artists with Mike Vanier’s tremendous experience and expertise are what set us apart, and we are thrilled to have him on our team, helping us to rebuild our music program after a very difficult few years.”

Learn more about classes with Mike Vanier and other offerings through the BAC School of the Arts at thebeverlyartscenter.com or 773-233-3100. Learn more about The Leadfoot Band on Facebook.