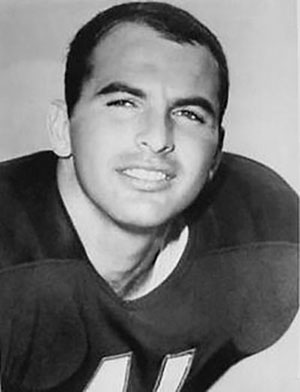 For the people who remember Chicago Bears #41 Brian Piccolo, the news that he passed away 50 years ago this month may be a stunning reminder of the tragedy of his death. For people who aren’t familiar with Piccolo, he was a man worth knowing.

Although he was born in Massachusetts and raised in Florida, our community thinks of Brian Piccolo as one of us. Soon after he signed on to play with the Bears in 1965, he and his wife, Joy, moved into a modest North Beverly home on Vanderpoel Street. He was right out of college – Wake Forest in North Carolina — where he had a stunning career, leading the nation in rushing and being named Atlantic Coast Conference Player of the Year on 1964.

Certainly, local Bears fans were charged up that Piccolo was a Monster of the Midway, but what made the truest mark on our community’s neighbors was that Piccolo was a great guy, a team player who was loyal and likeable, had a great work ethic and a playful sense of humor. He and Joy had three little girls, Lori, Traci and Kristi. BAPA Executive Director Mary Jo Viero’s family lived just a few doors down from the Piccolos, and recalls the Bears running back playing with his daughters and socializing with neighbors. They were a regular neighborhood family, Christ the King parishioners who loved being part of the Beverly community.

Piccolo didn’t start his time with the Bears as a star player. He spent 1965 on the practice squad, and, even though he was on the main roster in 1966, didn’t get a lot of memorable playing time. In 1967, he started backing up superstar tailback Gale Sayers. The on-field relationship led to Piccolo proving himself as a player, and as a friend. The two men broke color barriers in the NFL by rooming together in hotels on the road – at the time, sharing hotel rooms was segregated.

Although the Bears had one of their worst seasons in 1969, Piccolo was making his mark as a player and as a teammate. Then, an athlete in his early 20s and in the prime of his career, started getting short of breath when he was playing, and took himself out of the game. He was diagnosed with cancer in November 1969, and, following a heroic and heartbreaking battle to regain his health, died on June 16, 1970. He was 26 years old.

Brian Piccolo’s funeral was held at Christ the King Church and he was buried at St. Mary’s Cemetery in Evergreen Park. Gale Sayers and Dick Butkus were among the six Chicago Bears who served as pallbearers. Piccolo’s biography, “Brian Piccolo: A Short Season,” was written by Jeannie Morris (wife of former Chicago Bear Johnny Morris) and featuring many passages by Piccolo himself. The movie, “Brian’s Song,” told the story of the Brian Piccolo/Gale Sayers friendship.

In 1970, the Chicago Bears established the Brian Piccolo Award, still presented annually to one rookie and one veteran player who exemplify the courage, loyalty, teamwork, dedication and humor of the late Brian Piccolo. It is just one of many awards, buildings and memorials named in his honor.  The Bears also retired Piccolo’s number.

A few years ago, members of Beverly Improvement Association (BIA) and BAPA started working on a proposal to have a piece of land located at the end of Piccolo’s block of Vanderpoel developed into a park and named for the athlete and neighbor. BAPA’s Viero said Piccolo’s widow, Joy, loves the idea of a park in Brians’s honor. Viero hoping the idea can become a reality someday and invites people who are interested in learning more to contact her at mjviero@bapa.org.

In the meantime, BAPA does not want the anniversary of Piccolo’s tragic death to go unnoticed by his Beverly/Morgan Park neighbors. On Tues., June 16, 4p.m., everyone is invited to join a vehicle parade that will travel by Piccolo’s first home on Vanderpoel and last home on Hunt, passing by Christ the King Church. For more information, contact Viero at mjviero@bapa.org. In the meantime, anyone who did not know of Brian Piccolo before reading this article should make time to watch “Brian’s Song” and/or read “A Short Season.” There is still a lot we can learn from this outstanding neighbor who died way too young.