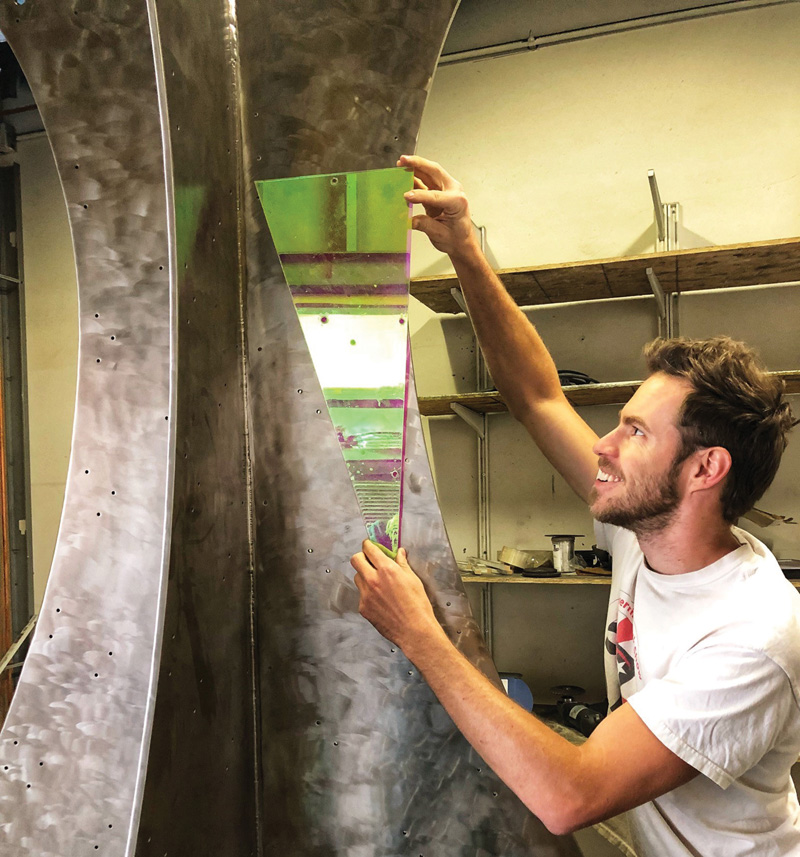 Quantum Me, a permanent piece of public art created by Chicago artist Davis McCarty will be unveiled at 99th and Walden Parkway amid a community celebration on Sat., May 19 beginning at 5:30 p.m. Quantum Me s a sculpture fabricated from mirror polished stainless steel and dichroic Plexiglas, is the 19th Ward’s installation through the City of Chicago’s 50×50 Neighborhood Arts Project.

Among the people planning to gather for the installation are Mark Kelly, Commissioner of the City of Chicago’s Department of Cultural Affairs and Special Events (DCASE), artist Davis McCarty, 19th Ward Ald. Matt O’Shea, Morgan Park Beverly Hills Business Association Executive Director Caroline Connors, and Co-Directors of the Beverly Area Arts Alliance Monica Wilczak and Sal Campbell. The public is invited to the installation which will be followed by a block-party style celebration between 99th and 100th Streets on Walden Parkway.

‘This is a great opportunity for us to come together and show Mark Kelly and the City that we are a neighborhood that loves and supports art,” Campbell said.

Quantum Me is a piece of art that will be easy to love” Colorful, ever-changing and offering a reflective perspective of viewers and the environment.

“If you walk around Quantum Me, the colors will magically change before your eyes,” McCarty said. “Two people standing in different locations can actually see different colors looking at the same spot.”

People who gather for the celebration will be among the first to have a close-up look at the sculpture that is sure to draw a lot of attention and visitors at its spot just across the street from the 99th Street Metra Station.  The celebration will include live music by blues vocalist Sheryl Youngblood, micro-brews from Horse Thief Hollow and Open Outcry Brewing Company, food from local establishments, and a preview of the Brews, Bags and Art competition coming up on May 20. All of the 99th and Walden businesses will stay open late for the event.

McCarty’s companion piece to Quantum Me is installed in Rogers Park, book-ending the city. Quantum Me is a giant spherical ball that transports the viewer into the sky. The Rogers Park sculpture is reversed, with the ball on the ground.

McCarty grew up in Southeast Asia where his parents were missionaries. He moved back to the United States to attend school at Beloit College in Wisconsin, majoring in computer science.  His work is influenced by Asian temples as well as science and technology.

The sculptures McCarty created for the 19th Ward and Rogers Park will last for decades because of the materials used to create them. “They will look as great in 50 years as they do today,” McCarty said.

The polished steel portion of Quantum Me is made from the same material as the Bean in Millennium Park. “As a society, we use images to share our experience with others,” McCarty said. “Creating a sculpture that allows people to photograph themselves in the art while simultaneously capturing the city is a great way to commemorate the experience of visiting Beverly. I hope to make people ask ‘where is that?’ and want to plan their own visit.”

McCarty’s Quantum Me was selected for the 19th Ward by a panel of community members, including representatives from BAPA, the Ward office, residents and artists. The project was spearheaded by the Beverly Area Arts Alliance.