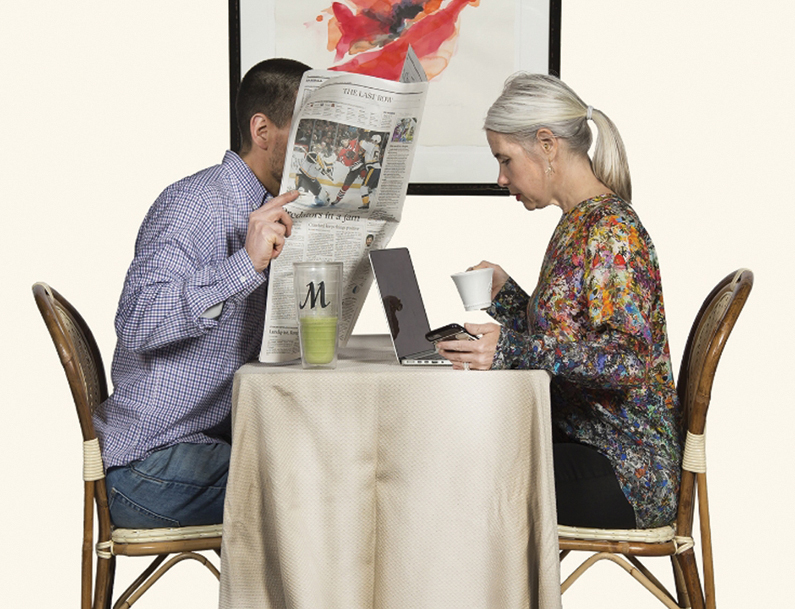 The exhibit contains 16 photographs that re-create famous scenes by Norman Rockwell, but with a modern twist.

Rockwell (1894-1978) was a popular artist most famous for the 323 cover illustrations he created for The Saturday Evening Post magazine from 1916 until 1963. He offered idealistic and often humorous looks at American life that reflected traditional family and patriotic values.

Although Rockwell painted scenes depicting simple everyday events – a couple having breakfast, parents tucking their children in for the night – his images made the viewer consider the relationships and interactions of the subjects.

Take, for example, that image of the couple having breakfast. In Rockwell’s version, titled “At the Breakfast Table,” the husband is buried in the newspaper, leaving the wife forlorn, with nothing to do. This earned the picture the familiar name, “The Neglected Housewife.” In Meiners’ retelling, the man is still buried in the paper, but now the woman is busy on her laptop and cell phone – she’s no longer waiting for his attention, she has her own interests to pursue. Meiners calls this image, “Power Breakfast,” and asks, “Refueling the body and brain, but what about the relationship?”

Meiners also comments on controversial societal issues through her photographs. One example is “Cock, Bang and Repeat,” a modern version of Rockwell’s 1943 “Freedom from Fear.”

Rockwell painted a series called the Four Freedoms, based on an address President Franklin Roosevelt gave to Congress. In the address, Roosevelt talked about freedom from want and from fear, freedom of speech, and freedom to worship. Rockwell interpreted these as paintings which ran in the Post, and then the paintings toured the country, raising money for the war effort.

“Freedom from Fear” showed a white mother and father tucking into bed their two young sons, a poignant scene for the World War II years. In Meiners’ version, a lone black mother watches over her sons, holding a newspaper with the headline, “Another black youth shot.” This creates a poignant scene for 2016.

Meiners is from the Chicago area, and went to school in the Berkshires area of Massachusetts, which is the location of the Norman Rockwell Museum. On a tour of the Rockwell Museum and observed the response viewers had to Rockwell’s paintings.

“I was taken with how well Rockwell’s images engaged the viewers, how accessible his work was,” said Meiners. “Everyone was having such a good time, really relating to the nostalgia of his works. I decided it would be interesting to re-create some of his mages with a modern twist. I researched Rockwell, and what he focused on. I want people to connect to my photos as they did to Rockwell’s, while also commenting on social issues. Art can be a platform for change.”

Each photograph took about three months to create,

“This is a very thoughtful exhibit,” said Irene Testa, President of VAA. “It was not thrown together haphazardly. I consider it a real coup that Maggie agreed to show her work at our gallery.”

Rockwell is quoted as saying, “I showed the America I knew and observed to others who might not have noticed.”

Meiners can say the same thing about her interpretations, and a viewer gets the feeling that Rockwell would approve.

The VAA was founded in 1914 as a memorial to John Vanderpoel (1857-1911), neighborhood resident, artist and instructor at the School of the Art Institute of Chicago. The VAA will hold a celebration to honor John Vanderpoel’s birthday Sun., Nov. 13, 2 to 4 p.m. at the gallery.  Open to the public, plans include an appraisal clinic for art work and antiques. Info: 773-779-0007.