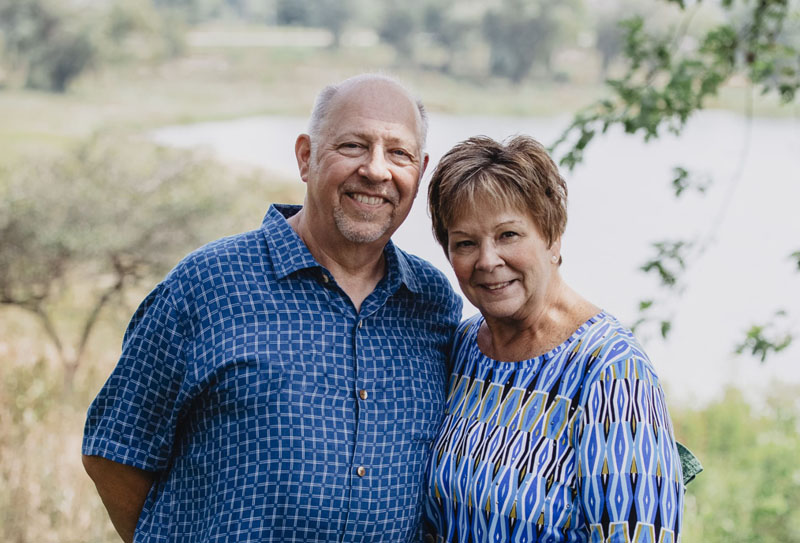 Lori Smith grew up on Chicago’s West Side, attending Notre Dame School for Girls and Jones Commercial High School. In 1973, she married Jim Smith, a South Sider and they started their family. The only real “battle” they had was Chicago Cubs or Chicago White Sox, until 16 years ago when Lori was diagnosed with Ductal Carcinoma In Situ (DCIS).

DCIS, considered the earliest form of breast cancer, is noninvasive, meaning it hasn’t spread out of the milk duct. This diagnosis was just three weeks after her mom received the same diagnosis. Smith was treated with a lumpectomy and endocrine therapy at Little Company of Mary Hospital (LCMH).

DCIS has an excellent prognosis with appropriate treatment, however, having a history of breast cancer increases the risk of a new cancer in the future, including an invasive carcinoma.

In June 2018, Smith went in for her annual mammogram. The initial images were “all clear,” but next day, Dr. Jilma Patrick, fellowship-trained breast surgeon at LCMH, called Smith to schedule a biopsy because the full images of the biopsy showed atypical cells. In July, Dr. Patrick performed a lumpectomy that revealed an invasive papillary carcinoma. Smith had another surgery in August that showed no additional cancer cells.

Smith didn’t need chemotherapy, but she would have to undergo 16 days of radiation and take an oral endocrine therapy pill for five years. She didn’t let this setback stop her from staying positive and exuding a wonderful energy.

“I never asked why me? I just said, ‘What do we need to do to fix this?’” Smith said. “I got up every morning for 16 days straight to go to my 8 a.m. radiation appointment with my husband, my rock, by my side.”

Every day after the 15–minute radiation treatment, her husband would take her back to their home in Palos Park. On day 16 when Smith came out of the radiation room, the team of doctors and technicians and her husband were there to celebrate the treatment’s completion.

Continued self-care, including mammograms, is the next step for Smith. She also plans to do some traveling. Every five years for their anniversary Lori and Jim go on a trip. This past anniversary they celebrated 45 years, but they were unable to travel do to Lori’s health, so Germany and Paris await this loving couple.

Smith is very appreciative for the LCMH staff, doctors, radiation technicians, her family and especially her rock, Jim. She knows she couldn’t have made it through her diagnosis and treatment without them. Smith will be among the thousands of people who will participate in the 20th Annual Beverly Breast Cancer Walk (BBCW), Mother’s Day, Sun., May 12, starting at 8 a.m., at Ridge Park, 96th and Longwood Drive.

Over the past 19 years, the BBCW has raised more than $6 million to support LCMH’s award-winning Comprehensive Breast Health Center and impacted the lives of thousands of breast cancer survivors. This generous community support helps to sustain breast health programming, and last year to deepen its impact with the establishment of a BBCW Crisis Fund to assist LCMH breast cancer patients with emergent financial needs within our community.

Register for the BBCW early to receive a t-shirt with your $30 entry fee; the entry fee for children ages 18 and under is $15; same-day registration is $10 more for adults and $5 more for children 18. Register and find details at www.BeverlyBreastCancerWalk.org.

To schedule a mammogram, go to www.lcmh.org/onlinescheduling.