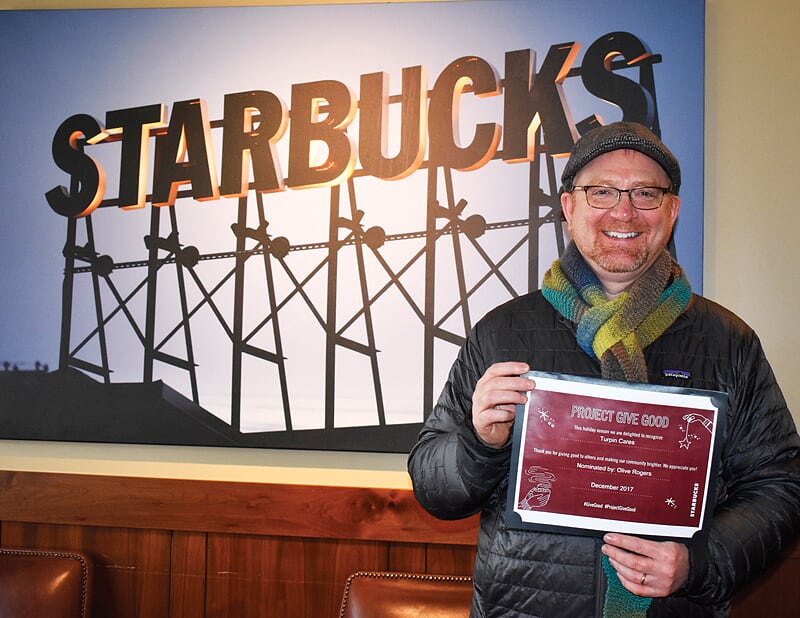 “If the pandemic has taught me anything, it’s to look for the silver linings,” said Greg Owen-Boger, Executive Director of Turpin Cares, a local philanthropic organization that kicked into high gear when the pandemic started two years ago.

Those silver linings include new friendships and partnerships, and, more recently, an opportunity for one of the organization’s recipients, who also happens to be an artist.

When the pandemic hit, BAPA and the newly formed 19th Ward Mutual Aid group partnered with Turpin Cares to open the Toiletry Free Store. Every first and third Wednesday they open up the “store” to provide toiletries, first-aid items, and household cleaning supplies to neighbors in need.

To date, the store, located at the Morgan Park Presbyterian Church, Longwood and 110th Place, has distributed over 57,000 items and supported nearly 3,000 households in Beverly/Morgan Park. Those items were either donated or purchased using funds donated by local residents.

The goal of the Free Store was to help neighbors who were struggling through the pandemic, and the need has not decreased.

“People are so generous and often don’t have any idea the impact they can have on others,” said Owen-Boger sharing a unique story about how one person’s act of generosity inspired a beautiful opportunity for a Free Store customer, a talented artist named Joel.

In December, a Turpin Cares donor purchased a batch of $50 Target gift cards to distribute at the Free Store Christmas event. Owen-Boger was in charge of handing out the cards on a first-come, first-served basis. “Joel was one of the lucky ones who’d gotten in line early that day. He was overwhelmed with the gift card.” Owen-Boger recalls Joel saying that no one had ever done something so kind for him, especially a complete stranger.

Two weeks later at the next Free Store event, Joel approached Owen-Boger with a very special thank-you gift: a watercolor of blooming daffodils.

“What a gift! Eventually an idea emerged. With the artist’s permission, we’ve turned the painting into a greeting card fundraiser for the Free Store. And here’s the best part: we’re splitting the revenue with Joel,” said Dale Ludwig, President of Turpin Cares.

“But this silver-lining story gets better,” said Owen-Boger. “I shared the painting with Sal Campbell from the Beverly Area Arts Alliance, and she met up with Joel.” After that brief meeting, where she saw some of his other works, she decided to hold a one-day exhibit of his work, Sat., Apr. 16, 2 to 4 p.m. at The Bloom Bar, 9909 S. Walden Pkwy. “This is just one example of how one person’s act of generosity inspired a cascade of opportunity.”

The Daffodil cards are available for purchase online at www.turpincares.org/shop. At check-out you can select to pick up your cards at the exhibit or have them shipped or hand delivered. For more information, contact turpincares@gmail.com