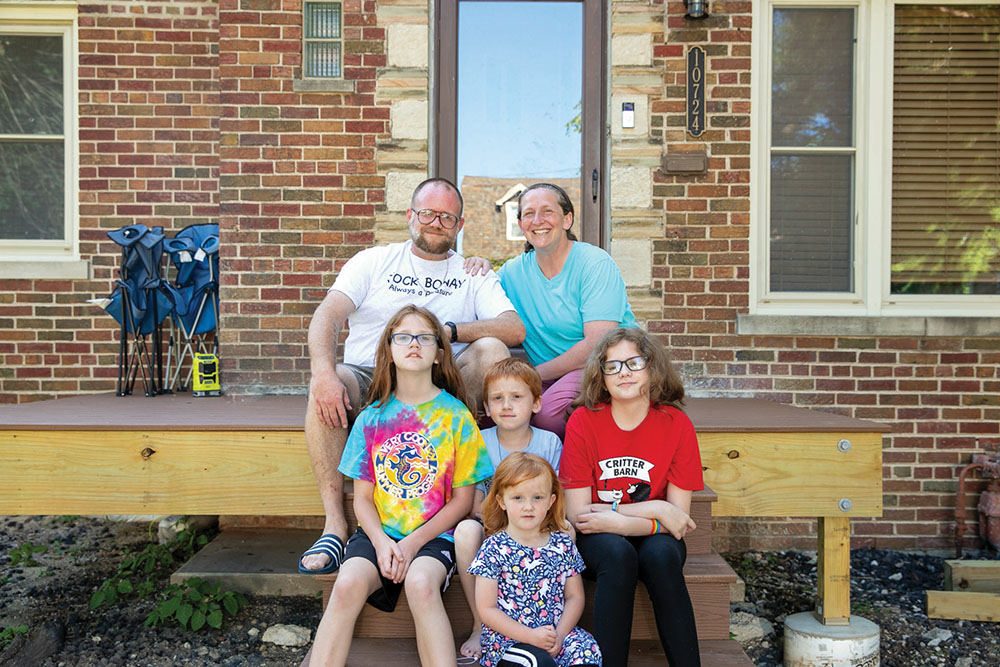 Moving into their new home and neighborhood last August, the Boylan family was happy to get their four kids settled before a new school year began. Nate and Lauren Boylan, along with their kids Isolde, 12, Tessa,10, James, 7, and Ingrid, 3, knew Beverly/Morgan Park was the spot for their forever home.

“Although we had not even been considering a move just a few short months prior, as soon as the idea picked up momentum there was only one area where we focused our search: the Beverly/Morgan Park neighborhood,” Lauren said. “There were so many beautiful homes coming on the market (and disappearing again off the market in the blink of an eye). As soon as we saw this Cape Cod, built right after World War II on a spacious lot on a tree-lined street, we knew that we had found our new home.”

Nate and Lauren moved to Chicago from Grand Rapids, Mich. in 2006, just as they were starting their careers. Lauren was the Director of Education at the Grand Rapids Art Museum, and Nate had recently finished student teaching in Grand Rapids Public Schools and wrapping up his M.Ed. at Grand Valley State University.

“It is hard to imagine now, but back in 2006, there were so few job openings for teachers in Michigan that even substitute teaching required a valid teaching certificate,” Lauren said. “Chicago offered more opportunities, professionally, for both of us.”

Nate soon began teaching at Thornwood High School in South Holland, and Lauren worked at the David and Alfred Smart Museum of Art at the University of Chicago.

Since moving to Chicago, the Boylans have lived on the southeast side of the city, with the exception of a brief period in Pilsen. Their first home was in Hyde Park and they also resided in South Shore before moving to Beverly/Morgan Park.

Lauren and Nate love the accessibility of Beverly/Morgan Park and the ability to walk most everywhere.

“I cannot overstate how wonderful that is; it doesn’t get any better than the convenience of having amazing local businesses and exceptional public spaces just a short distance from our home,” Lauren said. “We have absolutely worn a path from our front door to County Fair.”

The school-age Boylan kids attend Lenart Elementary Regional Gifted Center in West Chatham, and Lauren and Nate were happy that they haven’t had to make any drastic changes to the kids’ school or their own jobs with the move. The baby of the family, Ingrid, will attend Barbara Vick Early Childhood Center this fall.

Lauren loves the architecture and landscaping in the community, and her knowledge of art history helps her appreciate the finer details of the 19th- and 20th-centruy architecture around the neighborhood.

“For me, it is a such a treat to go for a walk around here and look at all the remarkable homes,” she said. “When I get a chance, I hope to learn more about the historical connection between Beverly and an area on the southeast side called the Jackson Park Highlands. The two areas were developed at the turn of the 20th century to mirror one another, and are still both full of the most stunning homes I have ever seen.”

Lauren is also excited to attend BAPA’s Home Tour next year to get an inside look at some of the historic homes.

The family loves attending the 95th Street Farmer’s Market and stopping into Afro Joe’s. They enjoy family walks and bike rides and gardening. “It is a great feeling knowing that this is our home for decades to come,” Lauren said.