A trio of Morgan Park Academy 8th graders earned recognition at the Illinois State history fair finals, including one student who advanced to the national competition.
Braelyn Hall’s exhibit on “The Power of Black Advertising” was one of nine individual projects in the junior division selected by Illinois judges to compete in the National History Day contest in June 2020.
Michael Amberg and Kelsey Frazier also received recognition from judges for “superior” exhibits. They and Beverly/Morgan Park resident Leona Bergin qualified to represent MPA on Illinois History Day after being chosen as standouts at the Chicago Metro History Fair regional competition.
Morgan Park Academy 8th graders participate each year in this popular and challenging competition, researching and presenting a long-form research project. Over three months of work during the winter, students researched primary sources to create museum-like exhibits, papers, and documentaries, including summary statements and annotated bibliographies.
In the past two years, seven MPA students have advanced to the state finals.
“There is so much success to be celebrated this year,” history teacher Vanessa Cleys said. “The students really became true historians and produced ‘college-level’ research, as the National History Day staff called it.
“In particular, Braelyn created one of only two individual exhibits chosen to represent Illinois at the national competition. I could not be more proud of the depths of knowledge she was able to reach on a topic that is extremely important to the progress of our society.”
Braelyn’s research project focused on groundbreaking African-American executives in Chicago advertising agencies, led by Tom Burrell.
Michael received an award from the Illinois Labor History Society for his exhibit on the role that the Lemont Massacre of 1885 played in the growth of the U.S. labor movement.
Kelsey studied the impact that Chicago’s famed Second City comedy troupe has had on increasing the number of women of color in comedy.
Leona filmed a documentary about the All-American Girls Professional Baseball League, famously featured in the film “A League of Their Own.” 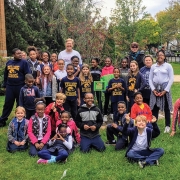 Kellogg’s Habitat for the Community 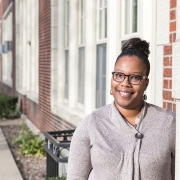 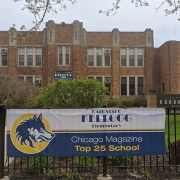 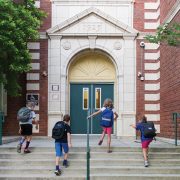 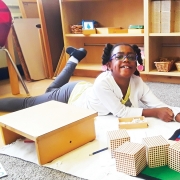 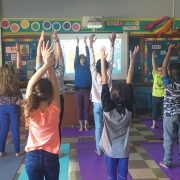