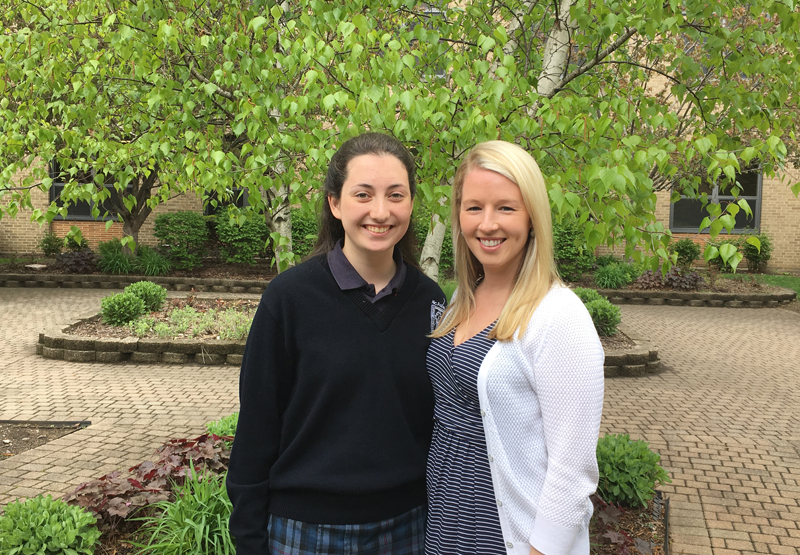 Mother McAuley High School student and Beverly/Morgan Park resident Catherine Rogers earned the highest possible ACT composite score of 36. On average, less than one-tenth of one percent of students who take the ACT earn a top score. In the U.S. high school graduating class of 2016, only 2,235 out of nearly 2.1 million graduates who took the ACT earned a composite score of 36.

A 2014 graduate of Saint John Fisher School, Rogers credits her teachers both at Fisher and Mother McAuley for helping prepare her for the ACT test.

“This is all so exciting, I still can’t believe it,” said Rogers. “I really believe my teachers at Saint John Fisher and Mother McAuley helped me get to where I am today. I am so grateful for all their support.”

The ACT consists of tests in English, mathematics, reading and science, each scored on a scale of 1–36. A student’s composite score is the average of the four test scores. Some students also take the optional ACT writing test, but the score for that test is reported separately and is not included within the ACT composite score.

“Catherine is an outstanding student, wholeheartedly committed to her academics,” said Mother McAuley Principal, Eileen O’Reilly. “This achievement is a testament to her hard work and sets the stage for the advancement of her college and career goals. Beyond excelling in the classroom, Catherine shares her talents with several academic and social clubs at McAuley, earning her the recognition and respect of both teachers and classmates.”

In a letter to each student recognizing this exceptional achievement, ACT Chief Executive Officer, Marten Roorda, stated, “Your achievement on the ACT is significant and rare. While test scores are just one of multiple criteria that most colleges consider when making admission decisions, your exceptional ACT composite score should prove helpful as you pursue your education and career goals.”

Her freshman year at McAuley, Rogers received the Sr. Agatha O’Brien Memorial Scholarship which recognizes students who score in the top five percent on the High School Placement Test.  She also was one of 16 students to receive the Tradition of Excellence Scholarship for legacy students. Rogers’ mother, Joan Dempsey Garey-Rogers ’83, five aunts, and sister, Jenna Garey ’09, all attended Mother McAuley. Most recently, Rogers was named a Mac with Merit, an award which recognizes students for their honorable character, diligent work ethic and notable contributions to the McAuley community. During her sophomore year, Rogers was honored with the Irish Fellowship Educational & Cultural Foundation Scholarship.

Outside of school Rogers serves as a teacher’s aide for the Saint John Fisher School of Religion, and during the summer she volunteers her time at the Chicago Public Library’s Summer Learning Challenge and as a Camp Counselor at Lake Katherine in Palos Heights.

While Rogers’s parents, William and Joan Dempsey Garey-Rogers ’83, are extremely proud of all Rogers has achieved academically, they are even more proud of the young woman she has become. “We are very proud of Catherine and all of the effort she puts into her schooling,” her parents said. “At Saint John Fisher, Catherine learned to be competent, curious and compassionate; she brought these traits to Mother McAuley and sharpened them as she has been challenged, motivated to succeed and determined to persevere. McAuley continues to be an incredible place for Catherine and we are so grateful! As pleased as we are about the ACT, we are more proud of Catherine’s kindness and gentle nature.”

ACT test scores are accepted by all major U.S. colleges. Exceptional scores of 36 provide colleges with evidence of student readiness for the academic rigors that lie ahead.