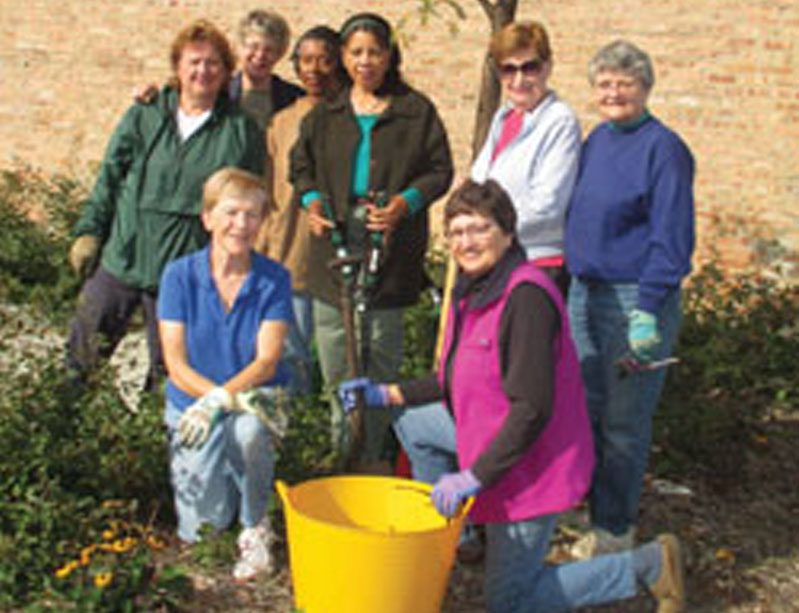 The Garden Club of Morgan Park/Beverly Hills celebrated a huge milestone this summer: its 90th anniversary. In honor of the milestone, the 54-member club was recognized with a Certificate of Merit from the National Garden Clubs organization. Since its inception, the club has been dedicated to beautifying the neighborhood, educating themselves about garden caretaking and also forming solid friendships with one another.

The garden club was informally established in 1926 and was officially chartered in 1927 as the Garden Club of Morgan Park – later adding “Beverly Hills” to its moniker, according to Joan Gavin, club president. “Enthusiastic gardeners met at the homes of its first 14 members,” Gavin said. “It was a working club of members interested in beautifying the community.”

One of the first tasks the garden club took on was caring for the triangular parks created by the winding streets, according to Gavin. The club also laid out the grounds for the Walker Branch Library and continued to care for and maintain the gardens there.

A high level of formality existed in the first several decades of the club, in line with the social mores of the time. “Members were referred to by their formal married names, never by their first name,” Gavin said. “Prospective members were presented to a vote, and each new member needed a favorable vote before they were accepted. Her garden was also subject to a vote.”

Needless to say, the club has evolved over the years! “Today we welcome all who are interested in learning about our environment,” Gavin said. “Meetings feature masterful speakers who bring knowledge and practical information, and who teach us about our place in the world, in our own community and in our own gardens.”

A few of the favorite speakers this past year included a discussion on hummingbirds and healing gardens. “Nancy Carroll gave a detailed and amazing talk on everything you could possibly want to know about hummingbirds,” said Barbara Gyarmathy, civic project coordinator for the club. “Our own member, Nadine Harris Clark, gave a beautiful presentation on healing gardens, ranging from rooftop gardens used at hospitals to help rehab patients, to healing properties of plants and herbs found to be helpful and useful on an individual level.”

The club sponsors an annual plant auction on the first Wednesday in May. The auction is held at the home of a club member and is open to the general public. “People can bid on plants that our members have contributed from their own gardens,” Gyarmathy said. “It’s unbelievable how popular this event is, and if a plant is something highly desirable, the price can skyrocket. All of the proceeds go to the club and pay for our informational speakers. We auction perennials and gift certificates and a very creative member makes fairy gardens and other garden-related goodies.”

Referred to as “play dates,” where members are said to form friendships with one another, the club works hard to maintain and improve the courtyard gardens at the Beverly Art Center and the “green” parking lot at BAPA.

“The club members voted to take on [the BAC] as its civic project, to give back to the community,” Gyarmathy said. The project began four years ago, and soon the club realized that it was a big one – the landscaping had become quite overgrown. A special focus was given to the courtyard: weeding, pruning, cutting back and cutting out. Gyarmathy said. “The process has been slow but noteworthy, and in the meantime, friendships have rooted and blossomed.”

At BAPA the work is minimal specifically because the gardens were planned to provide minimal maintenance. “Basically, the grasses need to be cut back in the spring and some trash picked up occasionally, but otherwise, it’s very manageable,” she said.

Anyone interested in becoming a garden club member can attend a meeting on the first Wednesday of each month at 9:30 a.m. at Bethlehem Lutheran Church, 9401 S. Oakley. Meetings and weekly projects take place on weekday mornings. That the schedule does not accommodate people who are unavailable on weekdays “does come with regrets,” Gyarmathy said. “But as all of us [who joined the club] will attest to, it was one of the best things that happened to us when we were able to retire!”