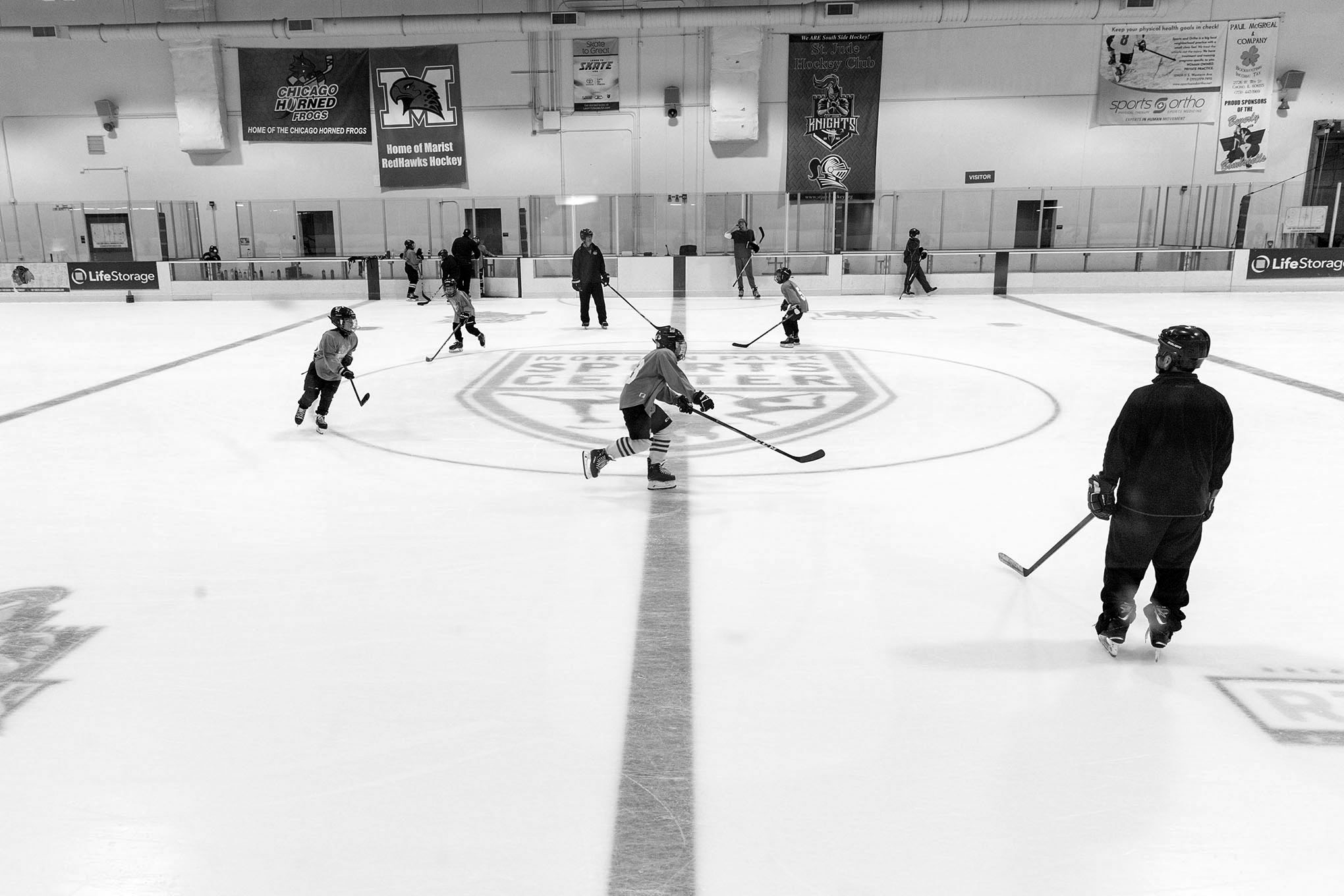 The Morgan Park Sports Center (MPSC), 11505 S. Western, was a little warmer than usual recently. For the first time since it opened, the ice was completely melted down and replaced, a necessary process that takes place every two years or so.

The painstaking process begins with a switch: the cooling tubes underneath the ice are turned off and, two days later, construction equipment is brought in to push the slush and remaining ice chunks outside, according to Kathy Janik, Learn to Skate and Figure Skating Coordinator at MPSC.

Then, the rink’s ground floor, which is concrete, is power washed to remove any paint remnants and prepare it for the fresh ice. Once the cleaning is done, the cooling tubes are turned back on to get the slab back down to ice-friendly temps. “We need to make sure the water freezes when it hits the slab. Water is sprayed on lightly to lay the first layer of ice,” Janik said. “One-quarter of an inch of ice is laid down before it is painted.”

The ice painting is a slow process done completely by hand. “The painters mix water and white-powdered ice paint together, then spray three to four layers of it on the ice to give it the solid white appearance you see,” said John Gannon, Hockey Coordinator and Assistant Facility Manager at MPSC. “It’s then ‘sealed’ by spraying several layers of clear water. After it’s sealed, all the markings are measured, drawn out and painted by hand or with the use of a paint stick.”

The hockey markings are hand painted and logos are laid. Some logos, like the ones used by MPSC teams, are made of mesh, while others are hand-painted using a template. “The logos are laid out on the ice, measured, and put in place. We then apply thin layers of water to freeze them in place. The process of painting takes about a half day or so,” Gannon said.

“We are now the home rinks for Marist High School and St. Jude Hockey Club, so their logos were painted on. We also placed logos for our own Horned Frogs Hockey Team and the Chicago Red Line Synchronized Skating Teams, both of which are MPSC programs,” Janik said.

This is the third year of the Horned Frogs team. “We have seen steady growth over the years and have seven teams participating in the Northwest Hockey League, in addition to our Learn to Play and Little Horned Frogs program,” Gannon said. “Our teams have won two division championships in 2017-2018, two first place finishes in 2018-2019, and we won several tournaments.”

Registration for the next session of all MPSC programs begins on Oct. 22, and will run from Nov. 3 through Jan. 12. Visit ChicagoParkDistrict.com to sign up.