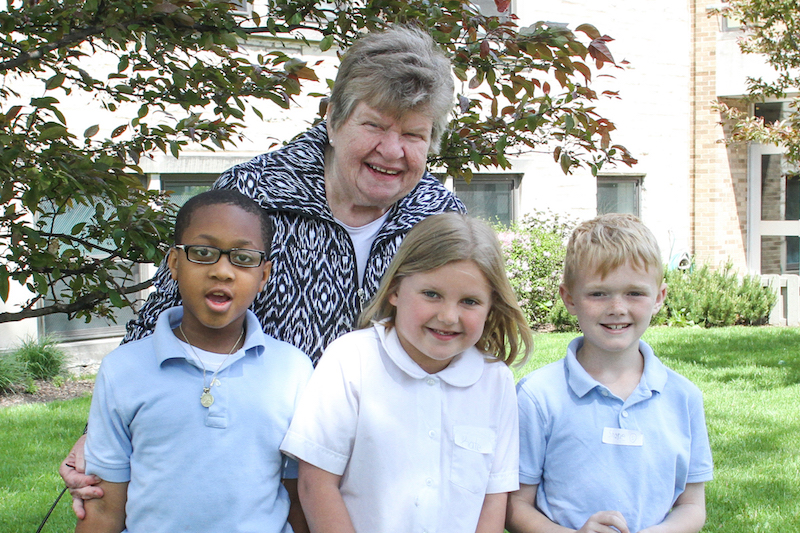 On a wet and chilly spring day I had the pleasure of meeting with Sr. Jean McGrath, whose warmth contrasted happily with the weather outside. Sr. Jean has been principal of St. John Fisher School, 10200 S. Washtenaw Ave., for the past 28 years, and her remarkable longevity underlines her deep belief in Catholic education and her love of children and community. For those few who don’t yet know her, she grew up blocks away in St. Cajetan parish, the second of seven children, and attended school there and at Mother McAuley before entering the Congregation of the Sisters of St. Joseph.

Sr. Jean began her career teaching second grade. Later she taught high school English at St. Paul high school, which was part of a partnership with a Chicago Public high school, John F. Kennedy High School, in the Garfield Ridge neighborhood. Students took classes at both schools. She came to St. John Fisher in 1986 and still feels “privileged to be part of this community.”

St. John Fisher School enrolls 707 students, with 3 classes in each grade, from preschool to 8th — an average of 23 children in a class. The preschool program comes in every option: part-time, full-time, half-day and three days a week. Kindergarten is full day.

The school’s greatest strength, Sr. Jean feels, is its very dedicated faculty. “They are a good balance between veterans and strong, young teachers, and they are willing to walk the extra mile,” she said. She added that many parents deeply invest in the school’s success. And while education comes first, “400 children play sports here.”  In addition, there is band, strings and Irish fiddle, school newspaper, yearbook, school play, Student Council, Junior Lego Team, and a stock market game program, which placed first, second and third in the region with a rip-roaring 20% return on investment.

Sr. Jean considers the introduction of technology to be the biggest change to education over her career, and beginning next year, junior high students will each use a Chromebook laptop. She emphasized the importance of integrating technology into the curriculum as an education tool and not using it as simply another “special” class.

Sr, Jean considers only the Common Core Standards in two subjects, math and writing, to represent a dramatic shift from previous standards. The school administers only the Aspire standardized test annually to grades 3 through 8.

“I feel blessed by our administrative advisory team who help me better understand the family dynamic,” Sr. Jean said. “I think parents are really pulled and stretched wanting to provide the best for their children. My hope is that St. John Fisher partners with parents. It does take a village and the concept of village is different than many years ago. Moms aren’t making pbj sandwiches for lunch at home anymore. They are getting off the Rock Island at 5.”