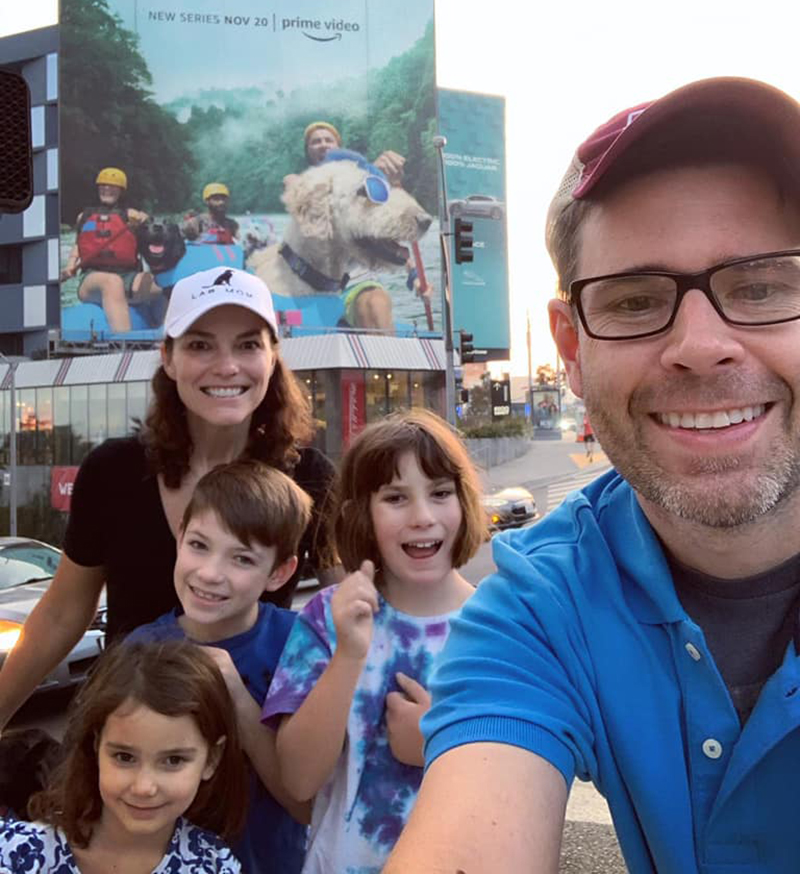 When Lucy Bansley Riles was growing up in Beverly/Morgan Park, she was enthralled with the theatre stage. As the youngest of 12 kids in the Bansley home, this graduate of Christ the King and Mother McAuley learned to find attention in any way she could grab it, which eventually turned into a career in entertainment.

Riles and her dog Duchess are featured in the new Amazon Prime Video series, “The Pack,” a reality competition that pairs dogs with their owners to take on an “Amazing Race”-style challenge around the world. On top of that, her book, “Mom vs. Dad,” co-written with her husband, Tom Riles, just hit the shelves.

“I started performing at Christ the King, which led me to take theatre and chorus at Mother McAuley,” Riles recalled. “From that moment on, I was locked in and knew I loved theatre and performing.”

A pivotal moment for Riles was a field trip with fellow McAuley sophomores to New York City, where they attended Broadway shows. “Literally, right now, there’s a billboard on Broadway with a picture of me and my dog on it! I wish my mom was alive to see this; she was my biggest cheerleader and believed in me more than I believed in myself. If not for my mom and dad, Barbara and Jim Bansley, none of this would have been possible,” she said.

Riles and Duchess, her black Labrador Retriever, made a unique pair on “The Pack.” Riles was the only mom to compete, and Duchess was the only rescue pup. The competition grand prize is $750,000 for the winning duo and their charity. Riles and Duchess are competing for “Paws with a Cause,” which pairs up highly-trained therapy dogs with adults and children with special needs who can’t otherwise afford a therapy dog.

“This was the most surreal, incredible experience! The fact that I could do it all with my girl Duchess made it that much more special,” Riles said, noting that the other teams didn’t think much of them. “Duchess knew only ‘sit’ and ‘fetch’ while some of the other dogs on the show could surf and mountain climb and knew dozens of tricks. But what they didn’t factor in is that moms are the strongest people in the world and Labs are the greatest dogs in the world! Duchess and I are here to prove that you can teach an old dog (and old mom) new tricks!”

Raising three children (ages 5, 8, and 10) in Los Angeles has helped Riles recognize how special it was to grow up in Beverly/Morgan Park. “The experience for my kids in LA is vastly different from the childhood I had. I have fond memories of growing up in Beverly; I felt really carefree and the sense of community is strong. There is such a special closeness and tightness within the Beverly community, and that was really special to me,” she said.

Riles and her husband co-wrote and published “Mom vs. Dad” based on their individual online communities, “Life of Mom” and “Life of Dad,” as well as their two-person live comedy show that premiered in LA and Chicago in 2019.

“We wrote the book to help couples share a laugh over the small stuff that drives us absolutely crazy about the other,” Riles said. “We hope to lighten the load a bit for parents and couples. Maybe if they knew that we too battle it out over the proper way to install a toilet paper roll and phone charger etiquette and the fact it may be time to say goodbye to those 20-year-old cargo shorts . . . couples might feel less alone! The world is so heavy right now, so why not make fun of the little things that drive you crazy so we can tap into that and bring laughter and levity into households.”

PrevPreviousThe Quilter’s Trunk – A Pillar of Our Community
Next12 Weeks of Christmas Continues!Next