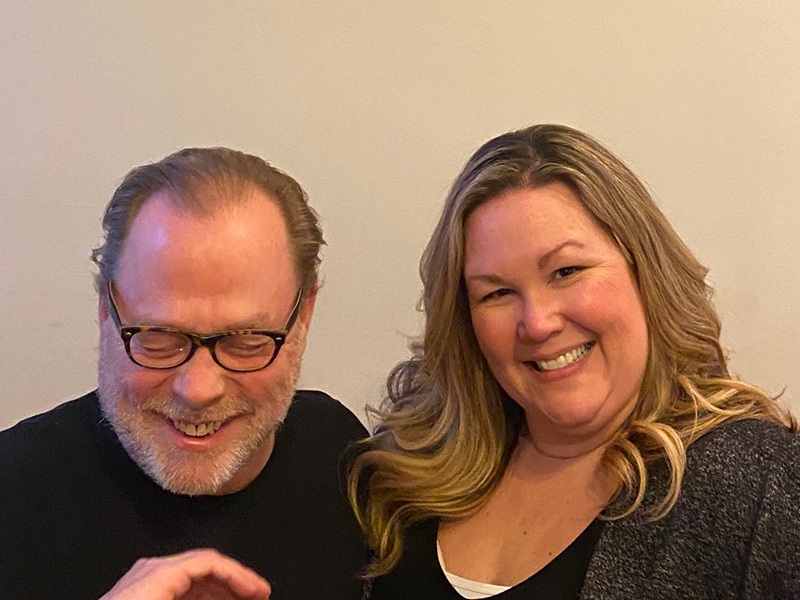 “When people have a book or script in front of them, they have created a wall between themselves and their audience, and, in most cases, a stationary position,” said storyteller David Boyle.  “When I tell a story, the audience becomes my scene partner and they get my whole self.  I can’t tell the story without them.”

“Reading you’re so worried about getting every little word down,” said storyteller Madeline O’Malley. “Storytelling is about getting out the emotions; it’s not a play, it’s a story.”

Last spring, Boyle, an actor, writer and musician, and O’Malley, a stand-up comic and comedic memoirist, founded a quarterly storytelling series they call South Specific. The two first worked together when O’Malley signed up for Boyle’s storytelling workshop as a new challenge in training as a performer.

O’Malley, by day a special education case manager for Chicago Public Schools, had started taking classes at The Second City. She likes the intimacy that comedic memoir and stand-up comedy evoke, and pursued both performance styles in classes, one woman shows and open mics. In addition to appearances on The Second City stages, O’Malley performed at Riddles, The Hideout, Under the Gun Theater and local venues.

In Boyle’s workshop, O’Malley upped her storytelling game, deepening the exposure that makes her stuff resonate with audiences that don’t just want to be entertained, but to connect.  “I do personal, autobiographical [stories}, and there’s such a feeling of catharsis,” O’Malley said. “I really like how common experiences are.”

O’Malley performed in Boyle’s showcase of workshop students, which he called South Specific, then took her talent on the road at fringe festivals in Elgin and Atlanta, and storytelling events that include Tellin’ Tales, Homewood Stories and at Oggi Chicago, and at The Frunchroom readers series in January. In addition to collaborating with Boyle on South Specific, O’Malley started an all-female storytelling and live music series in Pilsen called Truth Be Told.

Boyle has been singing and playing musical instruments all his life, and makes his living as a church music director. He started doing theater in high school and later, when directing a theater program for young actors, wrote scripts for student productions.

“I’ve always admired solo artists like Lily Tomlin and John Leguizamo but couldn’t fathom how I’d ever do what they can do,” Boyle said. Then in 2005, he performed “Santaland Diaries” by David Sedaris. “I wanted to do more work like that,” he said. In 2009, he took a class in writing for solo theater at Chicago Dramatists, and a year later performed, “An Accidental Organist,” his solo show about being a church musician. The show debuted at Gorilla Tango Theater and earned an excellent review in The Reader.

Boyle has appeared at various storytelling events throughout Chicago, and the Minnesota, St. Louis and Indianapolis fringe festivals; this fall he will perform for the seventh time on the Elgin Fringe Festival.

Storytelling appeals to Boyle in a way that’s totally different from his work as a musician or actor. “There’s a feeling of immense satisfaction after the performance of solo work,” he said. “It’s a different feeling from traditional theater with a cast; it’s all on me. I think it must be like what tightrope walkers feel when they reach the other end.”

O’Malley agrees that the challenge of being out there alone offers a unique satisfaction for a storyteller. “The best feeling is when you know you’re pulling it off,” she said.

Boyle and O’Malley will be pulling it off at South Specific, Fri., Feb. 28, Givins Beverly Castle, 10244 S. Longwood Dr. Doors open, 7:30 p.m.; stories begin at 8. They’ll each be telling two stories, one of which will be about their birthday, which they both celebrate this month. By the way, O’Malley’s birthday is Feb. 29 – yes, she’s a leap year baby, so (technicality) she will be turning 11. This show will be so much fun.

Tickets are $20 (a portion of the proceeds will benefit the Castle Restoration Fund.), in advance at concertsatthecastle.com and at the door.