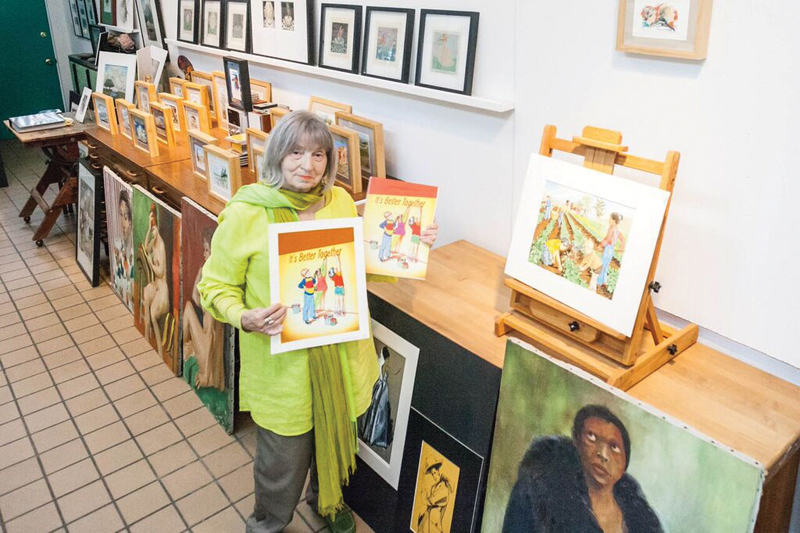 Bill and Judie Anderson enjoyed an incredible career together, and separately, as artists. Bill passed away in 2009 after suffering from a debilitating stroke and subsequent illnesses, and he left a legacy of commercial and fine art produced with his beloved wife of 51 years, Judie. “The Last Picture Show,” a culmination of the art the two created together, opens on Sun., June 25 at the Beverly Arts Center, with an opening reception from 2 to 5 p.m.

“I’m trying to perpetuate his memory by doing this show,” Anderson said. “I thought this would be a great culmination to our life here in Beverly. We started out here in 1966; we had a good life here and the community has been good to us — and we’ve been good to the community. We started the art school at the Beverly Arts Center; we began there and this show will end it there.”

Judie and Bill met while they were students at the Art Institute of Chicago. Bill, a painting major, was two years ahead of Judie, an advertising and fashion illustration major, although she ended up graduating before him due to Bill’s two-and-a-half year service in the Korean War. The pair went on one official date before Bill shipped out, but their love grew and grew through the letters they wrote to one another. As soon as Bill returned home, he proposed to Judie. A collection of those letters, which Judie calls “A Paper Courtship,” will be a part of the exhibit.

Once their married life began, Bill worked for Lyon Healy music store as their display manager and store designer. Meanwhile, Judie worked for” Chicago American” newspaper as a fashion illustrator. Soon, they began working together on cartoon drawings for “Chicago Magazine” and volunteer work for BAPA. They created the first-ever map of the Beverly/Morgan Park neighborhood for BAPA in painstaking detail.

As the fashion illustration industry began dwindling and the couple added two children to their family, Judie began illustrating educational materials for an Oak Lawn-based company as well as taking on other freelance work. “I had taken on this job to develop a spec that I worked on over the weekend and was due Monday morning. I was just about done with it and I put frisket paper over the illustration so I could wash in the background. When I went to peel it off, I peeled off the drawing too. I screamed and went ballistic,” she said. But Bill had an idea to salvage the project. “He said ‘you draw the left side and I’ll get the right side and we’ll work together until we get to the middle.’ We got it done, but we didn’t get the job! But that’s what started us working together in children’s illustration.”

One memorable job was illustrating educational materials for National Dairy. “We hired all the kids in the neighborhood to model for us,” she said. “We started having them pose, but they were so stiff. So I gave them the story to read and act out like a play. We took Polaroids of them and were able to draw from there.”

As their joint freelance art business took off, Bill and Judie decided to turn their screened-in porch into a beautiful, sun-lit studio. “And three months after we built it, the recession hit and the phone wasn’t ringing off the hook anymore,” Anderson said. “We didn’t know what was going to happen, but then I got a call from the “Chicago Tribune.’”

What Judie thought would be a six-month full-time Art Director position turned into 20 years. Bill continued to work from home and took on a “Mr. Mom” role with their children. The day before Christmas Eve one year, Judie got a call from work asking her to implement an idea by New Year’s. With no illustrators or designers available during the holidays, Judie enlisted Bill’s help in creating SPOTS, a children’s activity page that ran weekly in the Tribune. Bill created SPOTS for an entire year, before the paper decided to bring it to an in-house illustrator instead.

The Andersons gave another gift to the neighborhood in the form of a highly successful art school now known as the  Beverly Arts Center School of the Arts. Along with other neighborhood artists, the school was directed by Bill and Judie taught classes there as well.

At the age of 56, Bill suffered a stroke. Paralyzed from the neck down, he had to learn to swallow, walk and care for himself all over again. But the same day he had the stroke, he asked Judie to bring his sketchpad and pencils to the hospital. “I said ‘you can’t even lift your arm!’ and he said ‘watch me.’ He had such determination,” Anderson said.

Despite not being able to feel anything in his hand, Bill relearned how to paint and finally began creating art for himself. He created The Stroke Series, which is a series of paintings interpreting how he felt during the stroke and recovery process. It was on exhibit at the University of Chicago for years and now will be exhibited once again at the Beverly Arts Center.

“Bill was amazing, he was a profile in courage. He never complained or felt sorry for himself. He was always a good artist, but to do this after a stroke was just amazing,” Anderson said. Judie also created her own art similar to Bill’s stroke interpretation as she recovered from a heart attack a couple of years later.

Anderson was motivated to put their joint artwork on display as a way to showcase their life together. “It’s phenomenal what we did together. He was my rock; he was my art director. We would critique each other’s work or what we were doing together because we did it for the good of the product,” she said. “There was just a magic that happened; I can’t explain it. This was something that was so special. When I lost him, I lost half of me. But I was so fortunate to have had him for 50 years.”

“The Last Picture Show” will be on exhibit through July at the Beverly Arts Center, 2407 W. 111th St.