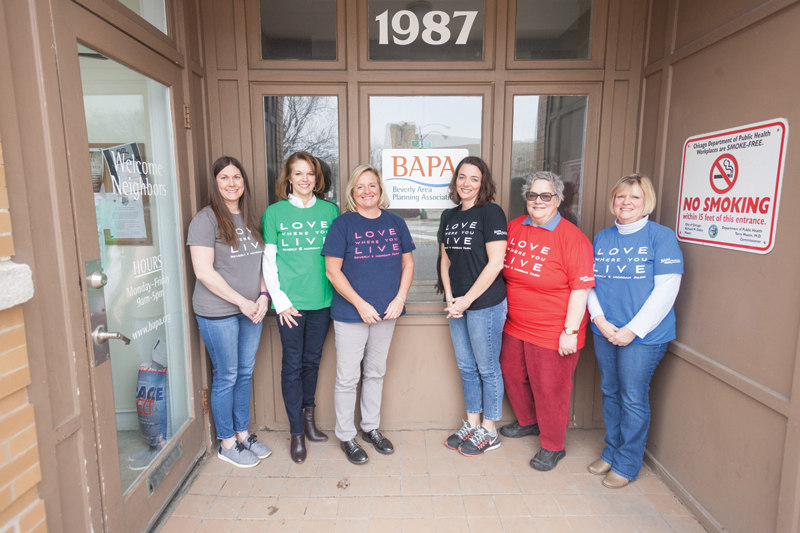 The BAPA staff works every day to make sure everyone in Beverly/Morgan Park loves where they live. But what does everyone do? These profiles will help you match the staff person to their accomplishments.  (The BAPA staff is pictured from left Jennifer Alving, Mary Jo Viero, Susan Flood, Margot Holland, Roberta Kleinman, Grace Kuikman.)

“I am one piece of the BAPA Office Staff that wants you to love where you live as much as I do,” said Jennifer Alving, BAPA Business Manager for the past two years. Alving grew up by the Sauganash neighborhood – what she now calls “Beverly North.” “I didn’t even know that there was such a place as the South Side.”  Her husband Michael was born and raised in the Christ the King (CK) Parish, which is where the couple bought their home 14 years ago.

Alving does the day-to-day, back-of-the-house work for BAPA, organizing mailings, receipts and payments; managing the membership database; assisting with BAPA programs and events; and helping out when needed. Among her accomplishmests are developing streamlined operations for thanking donors and mailing BAPA Cards, consistent quarterly renewal letters, and other aspects of data management designed to increase membership.

“My favorite part of working at BAPA is the staff.  We all bring a different trait to the table. Our little group gets a lot accomplished and we work well together,” she said.

“I still have two wonderful children at home [Emma, 14, and Aidan, 11], both who’ve enjoyed the same CK grade school experience that their father had. To be honest, it’s still a little weird for my husband to go to my son’s parent teacher conferences. You may see me around the neighborhood at Treadfit, Horse Thief Hollow, working the concessions at the CK gym or out walking my Bernedoodle, Flynn.”

Susan Flood joined the BAPA staff as Executive Director not quite six weeks ago, and hit the ground running.

“As Executive Director, I set vision and strategy for BAPA based on what our community needs,” she said. “I work on staffing and recruitment of a board of directors, and reach out to residents to support the Beverly/Morgan Park community through volunteering, support, event participation, and sharing of needs, wants and ideas.”

Flood said that her favorite part of working at BAPA is having the opportunity to give back to a community that has meant so much to her and my family and working for “all the people in my own backyard.”

In the short time she has been at BAPA’s helm, Flood has been focusing on using her skills and knowledge of the community to inform and drive BAPA’s programs. “My passion for and commitment to BAPA lies in bringing all aspects of Beverly/Morgan Park together to collaborate, so we can keep BAPA as a truly valuable resource to our residents, businesses, and  public servants.  Making sure that BAPA truly reflects this community and always has our eye on the ball.

“I chose Beverly 30 years ago, raised my family, have worked and played both in and outside the neighborhood during those years,” she continued.  “My career has always been in business development whether it be in the tech sector in my early years or as a passionate non-profit leader in this second half.  I have always chosen roles where I can dwell in possibility and find a way to get to ‘yes.’”

Flood said that her husband and three kids are her biggest supporters in ways too numerous to count.  “As my kids take their talents into the world I am reminded every day of the impact growing up in Beverly has had on their success,” she said.

“Raised by a saxophone player and married to an artist, you’re likely to see me at the Beverly Arts Center when I’m not at BAPA,” she said.

Margot Holland been on the BAPA staff just over three years, and recently moved from the position she held as Executive Director into a new part time role of Program Director. “This is a  very exciting new position formed to continue to strengthen BAPA’s relationship with the schools, CAPS program and businesses,”she said.

She loves coming to work every day, know the staff can make a difference and continue to fulfill BAPA’s mission.

When asked about which of her accomplishments she is most proud, Holland said, “There is so much to be proud of here at BAPA, we do so many things,” then added, “I am most proud of how our community rises to challenges and works together to support each other.”

Holland grew up in north Beverly and, after living many other places, moved back when it came time to raise a family. “Jeff and I have three kids and just adopted a puppy, Dakota! Most days you can find me shopping at County Fair and working out at Treadfit Beverly.”

Roberta Kleinman joined the BAPA staff the first week of 2016.  “The two areas of responsibility I assumed were real estate preservation, which requires familiarity with the Chicago Building and Zoning Codes, and crime prevention, which requires a working relationship with the commander, police officers and civilian CAPS personnel of the Monterey (22nd) District of the Chicago Police Department, where I am Vice Chair of the District Advisory Committee and serve on the Domestic Violence subcommittee,” Kleinman said. “Both areas of responsibility also entail working with 19th Ward officials and other city and county personnel.”

Working alongside BAPA’s staff members has led to other commitments, including working with Mary Jo Viero in starting up the Ridge Park Advisory Council and in representing BAPA at meetings of the Beverly Improvement Association, the oldest and most active neighborhood association in Beverly/Morgan Park.  Kleinman also interfaces on BAPA’s behalf as a board officer of the non-profit Friends of the Major Taylor Trail, and serve on the 19th Ward’s Environment Committee.

“My association with BAPA has raised my awareness of the social interconnections that enable this organization for more than 70 years to remain a unifying force in the lives of multiple generations of longstanding residents, even as it welcomes newcomers that find their way here from elsewhere in the city and state, as well as from other parts of the country,” Kleinman said. “I am particularly proud of my role identifying neglected and/or abandoned residential and commercial structures in BAPA’s service area to city officials, who have used that information to bring property owners into court to compel them to make necessary repairs, put their properties on the market, or consent to demolition in worst case situations where restoration efforts were no longer feasible.”

Kleinman has been a neighborhood resident for nearly 24 years, moving from New York.  “Although I knew absolutely no one when I moved in, I did not remain a stranger for long, as several neighbors on my block began to invite me to holiday dinners, backyard barbeques and their children’s graduation celebrations in their homes and I made the acquaintance of other North Beverly neighbors with whom I shared a daily Rock Island commute until my retirement,” she recalled. “It didn’t take long after that until I traded some of my newfound free time for the privilege of giving back to my adopted community, and volunteerism has been a big part of my daily life ever since.”

Grace Kuikman joined the BAPA staff 30+ years ago as freelance editor of The Villager. Having worked as a newspaper reporter and freelance writer and editor, the opportunity at BAPA was the perfect fit when Kuikman was ready to start raising a family. When her youngest child started all-day kindergarten at Sutherland School, Kuikman took over the role of communications at BAPA, and started working in the office. She oversees communications for all of BAPA’s events and programs, and produces The Villager, enews, website content and other BAPA print and digital initiatives.

“What I love most about working for BAPA is The Villager,” Kuikman said. “Every month for three decades, we have found new and wonderful stories about our neighbors, our schools, our churches, our businesses. It speaks volumes that this community stays so vital and continues to attract interesting and engaged people with even more new stories to tell.”

Kuikman said she is most proud of how BAPA and its communications – The Villager, website, enews, social media – have evolved over the years to remain important sources of information and media that are relevant to old and new neighbors.

Kuikman enjoys spending time with her three adult kids because they are really fun and interesting. Her pastimes are predictable: she’s the founder and facilitator of Longwood Writers Guild, spends her free time writing stories, and is about to launch a digital literary magazine with two longtime colleagues.

Mary Jo Viero began as BAPA Community Organizer in January 2016, working with neighborhood residents and businesses on green initiatives, promoting local shopping, and bringing people together for issues and events.

Viero works with civic and homeowners associations to support their efforts to resolve issues, host events, and communicate with their neighbors.  She helps to promote small businesses with the BAPA Card program and small business events such as the Sip and Shop and Cookie Crawl.

“My favorite part of working for BAPA is our staff,” Viero said.  “We are small but mighty. I don’t like to talk about things, I like to get things done. Not a day that goes by that we don’t accomplish something positive for the community.”

Viero and her husband, George, moved to Beverly/Morgan Park in 2003 and their son Frank was born in 2004. They are active St. Barnabas parishioners and Frank will be graduating from St. Barnabas this year. Viero is President of the Ridge Park Advisory Council (RPAC), a volunteer group that works to improve the condition of the Ridge Park fieldhouse.

“I’m proud of the work I have done with the Park District, introducing the idea for Picccolo Park as well as helping to get improvements for Ridge Park Fieldhouse. The RPAC is moving forward on fundraising efforts, hosting events and building awareness of the importance of Ridge Park and its connection to our community.”

Viero likes to stay active. “Neighbors might see me at on Weeding Wednesdays at the Metra Stations or a park. You may also see me eating and shopping locally!”