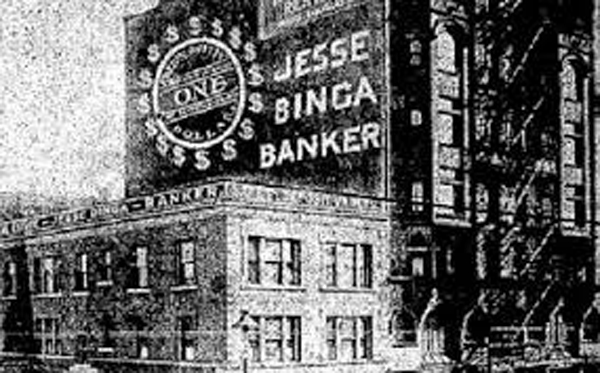 Jesse Binga came to Chicago in 1892 with 10 dollars in his pocket and by 1919 he was a wealthy realtor, Chicago’s first black banker and a lightning rod for the worst race riot in Chicago history.

Close to a century later, he is largely forgotten, primarily because of the way his story ends.

Born in Detroit in 1865, Binga spent seven years traveling the country as a Pullman porter and a self-employed barber before arriving in Chicago ready for a new beginning in one of the nation’s fastest growing cities.

He started with a pushcart selling fruit to crowds coming for the 1893 World’s Fair and survived an economic depression by leasing out space in his rented room near 37th and State. Over the next few years he expanded to a house, an apartment building, and dozens of flats and storefronts, leasing space to the city‘s growing black population. Eventually white property owners also enlisted his services.

By 1908 Binga was landlord to some 2,000 tenants when he opened a bank at 36th and State — the first black-owned bank in Chicago. And in 1912, he married Eudora Johnson, a wealthy real estate owner who in 1907 inherited several hundred thousand dollars from her brother John “Mushmouth” Johnson, the most notorious policy king on the South Side.

Binga, a devout Catholic, and his wife donated Christmas gifts to parish schools (St. Monica’s and St. Elizabeth’s), bought food and coal for winter heat for the needy and gave scores of college scholarships.

But as Binga’s real estate and banking business grew, so did his troubles.

Binga’s home, which was in a white neighborhood, and his real estate office were bombed eight times in four years (1917-1921) when there were 58 racially-motivated bombings in Chicago that killed two people, including a six-year-old girl. Other properties Binga sold or managed were bombed and multiple threats came by phone and letter.

In July of 1919 tensions erupted into the city’s worst race riot resulting in 38 dead, 537 injured and about 1,000 left homeless. After the riot, Binga received a letter from the “Headquarters of the White Hands,” which blamed him for the riots, told him to stop moving blacks into white neighborhoods, and warned him, “You know what comes next,” according to the Chicago Commission on Race Relations.

Binga remained focused on his empire. He built a new bank at 35th and State and the Binga Arcade next door, a magnificient six-story building with 48 offices and 21 stores.

When the market crashed in 1929, so did Binga’s fortunes. His bank was the first Chicago bank to close in the Great Depression, and later Binga was indicted for embezzlement. Several of Binga friends and renters testified they unknowingly signed blank sheets of paper for Binga, which he filled in as mortgages to inflate the bank’s assets.

Binga was convicted and sentenced for one to ten years. Despite a petition signed by 10,000 black Chicagoans and parole hearing testimony from ministers, priests, nuns, politicians and community leaders, Binga served three years in Stateville, one of the nation’s toughest prisons.

He was paroled in early 1938 with a job as a parish janitor at St. Anselm’s Church at 61st and Michigan. Binga maintained his innocence throughout his life and was later reported to have been pardoned by Gov. Dwight Green in 1941.