You are here: Home / The Villager / Community History / In recognition of Gertrude Blackwelder for Women’s History Month ...

Gertrude Blackwelder made history on Saturday, July 26, 1913, when she cast her ballot in Morgan Park’s special election on building a new high school.

Reported Town Talk, a local paper, “As this was the first opportunity given women of Cook County by virtue of the recently enacted Women’s Suffrage law to vote upon questions other than candidates for school boards, nothing could have been more fitting than that Mrs. I. S. Blackwelder, former president of the Chicago Woman’s Club, and consistent worker for the betterment of women and children, as well as mankind as a whole, should cast the first woman’s vote in Morgan Park and Cook County.”

A photo of Mrs. Blackwelder casting that vote appeared in numerous papers. The Illinois law was the final push that led to the U. S. Constitution’s Nineteenth Amendment in 1920, granting women the right to vote.

The Progressive Era of 1890-1920 was a time of great reform and advancements, particularly in government and social areas. Gertrude Blackwelder embodied the spirit of that Era, working for women’s suffrage and other causes.

Alice Gertrude Boughton was born in 1853 in New York. Her father, a Baptist minister. valued education. In 1869, she joined her sister in Kansas to attend the newly established university there. Following graduation in 1875, she was the first female graduate to be appointed to the faculty and, in 1890, she became the first woman to give a commencement speech. Improving education opportunities for women and other disadvantaged groups became another important cause for Gertrude.

In 1877, Gertrude married Isaac Simeon (I. S.) Blackwelder, and moved to Chicago. Blackwelder (1840-1926) rose to top management in the insurance industry, starting as an adjustor handling claims from the Great Chicago Fire of 1871.

The Blackwelders settled in Morgan Park, where I. S. served as president of the Village Board. Sons Paul and Eliot were born. The family acquired the Ingersoll house at 10910 S. Prospect Ave., adding a Queen Anne–style front to the existing Italianate-style structure.

At that time, the wives of wealthy men did not “work” outside the home. They applied their intelligence, skills and wealth to projects through volunteer organizations. Gertrude was elected to membership in the prestigious Chicago Woman’s Club (CWC), where she worked alongside Jane Addams of Hull House and Bertha Honore Palmer.

Due to her leadership abilities, Gertrude was chosen for higher office in the CWC. She served as Second and then First Vice President, and as President from 1906 to 1908. During those years, issues CWC addressed included children’s healthcare and daycare, the juvenile court system, crimes against children, working rights and conditions for women and children, sanitation and disease prevention in Chicago neighborhoods, pure food laws, and programs for the blind.

Even as an executive officer, Gertrude made time to chair the Story Telling Committee, organizing and conducting story hours at schools, libraries and recreation centers.

At home, the Blackwelders were involved in “all things Morgan Park.” At the request of local women, Gertrude co-founded the Morgan Park Woman’s Club in 1889. This is the oldest women’s club still existing in Chicago.

The Blackwelders supported the annexation of Morgan Park to Chicago, and the building of the high school. Both sat on local school boards, and Gertrude headed the Public School Art League which obtained artwork to decorate the school. A proposal in 1923 to rename the high school for the Blackwelders resulted in naming the auditorium Blackwelder Hall.

Later, the Blackwelders moved to Stanford, California, where son Eliot was a college professor. Gertrude died there in 1938.

“When I entered the University, in January, 1869,” wrote Gertrude in the 1908 Graduate Magazine of the University of Kansas, “Such was my delight at the opportunity for higher education, then largely denied to girls, that no thought of our limitations disturbed the serenity of my youthful mind.”

That attitude prevailed throughout Gertrude Blackwelder’s life: she gave no thought to limitations. Her influence and accomplishments reached far beyond Morgan Park. Women’s History Month is a fitting time to give her recognition. 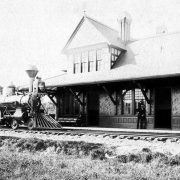 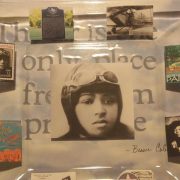 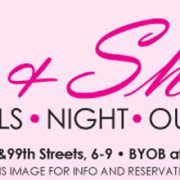 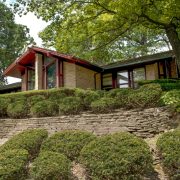