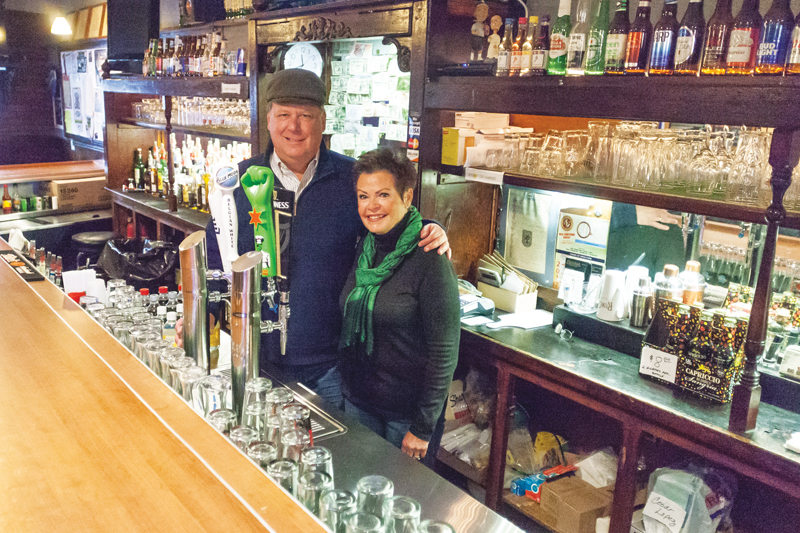 The South Side Irish Parade is more than a jaunt down Western Avenue. For many families, it’s an opportunity to gather around and enjoy Irish food, beer, music, and of course, companionship.

Maureen and Jack Kelly are masters of the Parade Day celebration. This year is extra special, as Jack celebrates his first year as the proprietor of Kelly’s Tap, 10910 S. Western Ave. Although Kelly’s Tap will be closed for a private party on Parade Day, he promises that patrons will be able to enjoy specials on Guinness, Irish whiskey, and other beverages throughout the month of March.

The Kellys hosted their first Parade Day party in 1985, shortly after they moved into their Beverly/Morgan Park home.

“Each year, more and more people attended, but the size of the crowd began to be a reason for concern,” Maureen said. “One year, we woke up the next morning to discover all our toothbrushes were missing; that mystery has never been solved! We eventually decided to take a one-year break from hosting a post-parade party.”

Intending to simplify the event, and prevent any further toothbrush theft, they began hosting a breakfast and invited only their family, neighbors and those marching in the parade. However, as word got out about the tasty food and warm hospitality, the party began growing in size once again. Soon, the Kellys’ pre-parade parties became the stuff legends are made of.

“We have had the honor of hosting NYC firefighter/policemen, dignitaries from Ireland, lots of candidates and many federal, state, county, and city elected officials and union officials. Our most famous guest was Barack Obama, who stopped in several years before he ran for president. But, of course, we don’t have any pictures,” Maureen said.

“Our favorite part of Parade Day is the celebration of faith, family, friends and heritage,” she said. “We do most of the cooking and baking the day before with dishes that can be heated on Sunday morning. Lots of soda bread, breakfast casseroles, potatoes, bread pudding with an Irish whiskey caramel sauce, and lots of treats our friends and family contribute.”

Of course, there are corned beef sandwiches too, which Maureen wraps up in plastic so the guests can enjoy them while watching the parade. One of her favorite items to make is Jack’s grandmother’s Irish Soda Bread.

“I love that I have this copy, especially because it is in her own handwriting. I never had the pleasure to meet her, but have shared her recipe and feel like we honor her memory each time we bake a loaf,” Maureen said. “Our oldest daughter, Kacey, has taken over all the soda bread baking duties, and she makes a mean loaf! I have added my own special twist to the recipe that makes the bread even better, but that’s a guarded secret.”

Heat oven to 350 degrees. Sift dry ingredients together. Cut in shortening. Add raisins and stir in buttermilk. Knead gently on lightly floured board for 30 seconds. Pat out and place in a greased 1 qt. casserole dish or 9-10″ pie dish. Cut a cross on the top, about 1/4″ deep. Brush with cream, or milk. Bake about one hour, or until toothpick comes out clean.