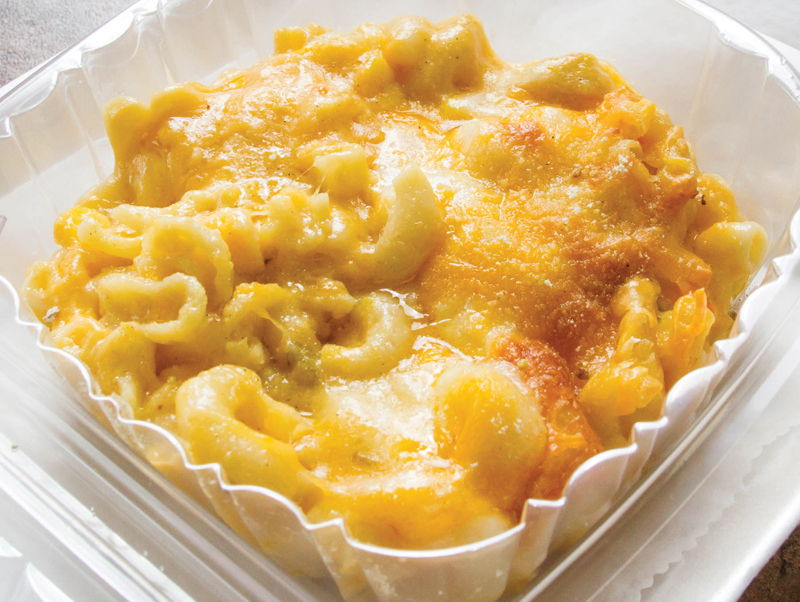 Every family has a food tradition at the holidays, from Aunt Judy’s green bean casserole to Grandma’s pumpkin pie from scratch. These foods evoke childhood memories and instill an urge to keep the tradition going for the next generation. A few Beverly/Morgan Park neighbors recently shared their family foodie traditions.

Anyone who has visited Americanos, 11060 S. Western, knows that owner AJ Castillo and his hard-working kitchen create delectable modern Mexican food. During the holidays, the Castillos gather in their home kitchens.

“On New Year’s Day, my mother always has pozole, which is a soup made with hominy, pork shoulder, guajillo chilies, cabbage, onions, cilantro and radishes,” he said. “My mother, Cynthia Castillo, learned to make pozole from her mother. These dishes are a special part of the holiday because it reminds us all of home and where we came from.”

Unfortunately, Castillo was unable to share the tamale and pozole recipes because, as experienced family tradition cooks know, these kinds of dishes are prepared based not on written recipes but on instinct, and maybe a whisper from Grandma.

Sonia and 5-year-old daughter, Emily, began a homemade cinnamon roll tradition that spans every holiday and birthday throughout the year — and little Emily takes the lead! “Emily loves being in the kitchen baking with me; she loves measuring the flour and sugar, cracking eggs, and pouring the ingredients into the mixture,” Sonia said. “Nate and I got into breadmaking and pastry dough making after binging ‘The Great British Bake-Off,’ and now Emily gets in and kneads the dough perfectly for our cinnamon rolls.”

Sonia and Emily begin mixing and prepping the dough the night before, to give it the necessary time to rise; then they bake them fresh in the morning. Sonia developed her recipe based on four others she found online, mixing and matching the quantities and ingredients until she hit on the best combination. Sonia and Emily’s cinnamon rolls pair perfectly with Two Mile Coffee Bar coffee; the shop is expected to release a special holiday drink later in December.

How To Make Cinnamon Rolls

Dissolve yeast in the warm milk and let sit 5 to 10 minutes until it has foamed up.

Combine sugar, butter, salt, eggs and flour in a stand mixer with dough hook and mix on low. Pour the milk/yeast mixture over the flour mixture. “Knead” in mixer until dough pulls away from the sides of the bowl. Run mixer for approximately 10 minutes to allow dough to stretch and develop gluten. Place dough into an oiled bowl, cover and let rise in a warm place about 1 hour or until it has doubled in size.

Prepare filling: Combine the brown sugar and cinnamon in a bowl.

To assemble cinnamon rolls, roll out dough on a lightly floured surface until it is approximately 16 inches long by 12 inches wide. Spread filling evenly over the dough. Working carefully from the long edge, roll dough. Cut into 1 1/2 inch slices, and place in a lightly greased baking pan.

Place rolls into a lightly greased baking pan, cover with plastic wrap and put in refrigerator overnight. The next day, allow them to come to room temperature before baking.

While rolls are baking make frosting, combining all ingredients and beating with an electric mixer until fluffy and smooth. When the rolls are done, spread generously with frosting.

For Stephen Milton and Sandra Beidron and their son, Sebastian, the array of holiday food traditions range from German dishes on St. Nicholas Day and Christmas morning to Slavic on Christmas Eve and Italian the day after Christmas to celebrate St. Stephen’s Day.

Biedron’s mother, Gail, passed along the tradition of going to German shops on Lincoln Avenue for stolen, the German Christmas cake. Biedron’s father, the late Emil, was born on Christmas Eve in a family that celebrated Czech, Slovak and Polish traditions. “My grandmother had my dad at home at 1926 North Winchester and was not charged for the birth assistance by the doctor because he said the baby was good luck,” Biedron said.

“Christmas Eve dinner starts with breaking of the break about a half hour before the stars come out, then people gather around the table and the dinner starts when the first star is seen,” Biedron explained. “There are plates stacked at the table for the people that could not join us.  The top plate is with straw for the Christ child.”

Christmas Eve dinner is meatless because of the tradition of fasting until after midnight. Dishes include Sole Walewska, pierogis with a sour cream sauce, crepes filled with apricot, raspberry or prune, cucumbers with dill, vinegar, and sour cream,  stewed fruit and rye bread.

The Italian tradition also features fish and vegetarian dishes on Christmas Eve, a big dinner on St. Stephen’s Day, and Panettone on Epiphany eve when La Befana, the witch who comes by broom on Epiphany Eve to bring gifts.

Brandy (may use cognac or Armagnac)

Cook lobster tails in the oven at 300 to350 degrees for about 30 minutes. Remove the lobster from the shells and set the lobster meat in the refrigerator. Place lobster shells in a pan with the cream, butter and brandy and simmer gently until the creme is orange-pink (about 1-2 hours). Strain shells from sauce and reduce; thicken with a little corn starch if needed. Once reduced, add dime- to quarter-sized pieces of lobster into the simmering cream sauce for 5 minutes maximum).  In a shallow pan of simmering water, gently poach the Dover Sole until cooked (ten minutes or less). Serve with lobster sauce on the side.

Although Judie Anderson’s mother was born in the United States, her parents didn’t like America so they raised their daughter in their native country, Ukraine. In 1927, at the age of sixteen, Judie’s mother returned to the USA by herself, and settled in Chicago.

Judie and her brother were raised in the holiday traditions of Ukraine, similar to the traditions in Poland and Lithuania. With her mother as her guide, Judie learned to make intricate straw tree ornaments, and to appreciate the colorful beauty and intricate design of the Ukranian creche, Christmas decorations and foods.

The Christmas holidays were celebrated on Jan. 6 with dancing and festive foods. Like the tables set in her childhood, Anderson still prepares the dishes that recall her youth: borscht, pierogis, holepchi (cabbage rolls), kishka (blood sausage), kapusta (sauerkraut) and rye bread. Sweets include the beautifully decorated babka, a sweet bread made with citrus fruits, raisins and almonds, and kolacky.

Anderson shared her easy and delicious recipe for sauerkraut.

Simmer all ingredients for about 15 minutes. Add 1 tablespoon cornstarch mixed in 1/4 cup water and stir to thicken. Serves 4-6.