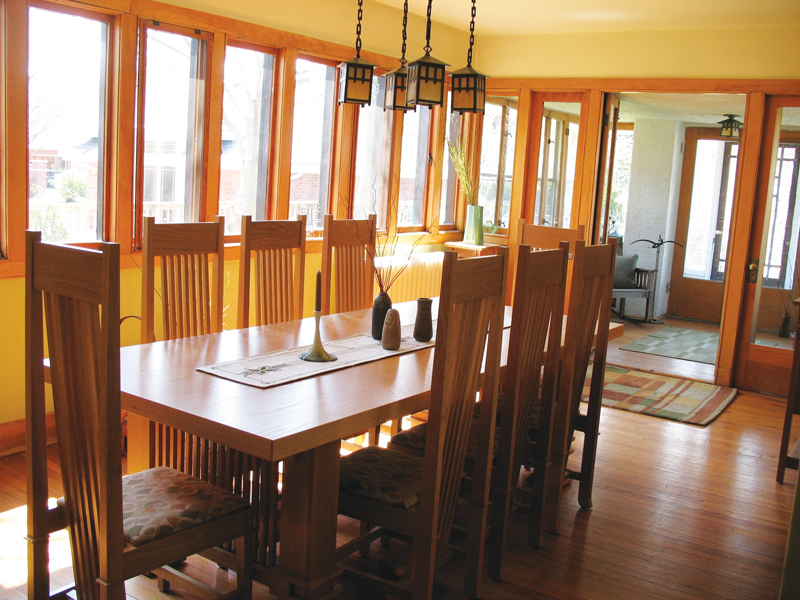 Two unusual homes designed by Frank Lloyd Wright and a tiny house designed and built by students from the Chicago High School for Agricultural Sciences are among the outstanding stops on the Beverly Area Planning Association’s Beverly Hills/Morgan Park Home Tour Sun., May 21, 12 to 5 p.m.

All tours must begin by 3 p.m., and start at Ridge Park, 9625 S. Longwood Dr., where people must check-in to receive their booklets, which are required for admission into the homes.  The three-level historic Ridge Park fieldhouse features a pool, meeting rooms, performance space, gym and workout room, as well as the Vanderpoel Art Association art gallery.

This is a particularly important year for fans of Frank Lloyd Wright and his architecture. It is the 150th anniversary of the architect’s birth, as well as the 100th anniversary of the construction of Wright’s Guy C. Smith House in Beverly/Morgan Park. The Smith House and the Jesse & William Adams House, both Chicago Landmark houses, will be open for the Tour. They are rare and distinctive examples of Wright’s work.

The Guy C. Smith house is one of two American System Built homes designed by Wright and built in our community in1917.  Wright’s goal was to offer livable and beautiful prefabricated housing at a moderate price.  Only a few of the homes were built before the US entered World War I and construction materials became less available.  The current owners have spent more than 25 years carefully restoring this house. It as last on the Home Tour a decade ago, and since that time has undergone a complete renovation of its spacious yard that includes the installation of a Wright-inspired pond and all new landscaping.

Built in 1901, the Jesse and William Adams house was designed during an important period of experimentation for Frank Lloyd Wright that resulted in the development of the Prairie School. The home’s owner, William Adams, commissioned Wright to design it. Adams was a contractor/builder who worked with several prominent architects on residential and commercial buildings. Adams and Wright worked on several projects. Emerging Prairie Style elements in the Adams house can be seen in the horizontal design and the way the porch connects the homes interior and exterior. The Adams house was last on BAPA’s Home Tour in 1996.

Also Featured on the Tour

The Tour will also open the doors to an exceptional Prairie Style house that has been renovated from top to bottom for a contemporary family lifestyle; an English style home designed by Homer G. Sailor and built in 1930 for a prominent Chicago financier; a historied Colonial Revival Foursquare built in 1903 on a wooded lot atop the hill; and a tiny house built for display at Chicago’s Home and Garden Show by students at the Chicago Ag school.

Tickets for the Beverly/Morgan Park Home Tour are $30 in advance and $35 at the door, and available online at www.bapa.org or at the BAPA office, 1987 W. 111th St., Mon. through Thurs., 9 a.m. to 4 p.m. For information on the event, volunteering or becoming a sponsor, contact bapa@bapa.org. .