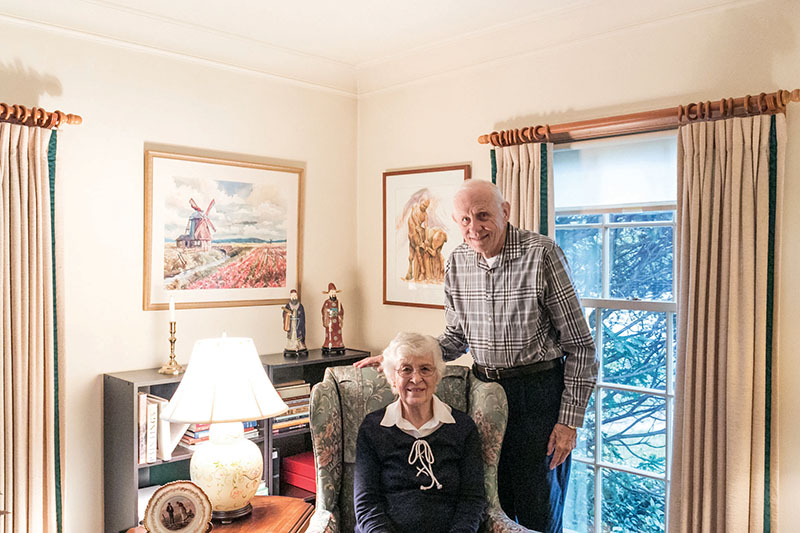 For the past three decades, Sid and Grace Hamper have been tireless stewards of one of Beverly/Morgan Park’s most cherished institutions, the John H. Vanderpoel Art Association (VAA) collection of 19th and 20th century American art. As lovers of art and their community, the Hampers have committed their outstanding time and talents in abundance, Sid as treasurer, president and now president emeritus, and Grace as a volunteer and curator.

For their dedication to the Vanderpoel Art Association, the Hampers will be presented with the BAPA Community Service Award at the Beverly Area Planning Association annual Donor Recognition Reception on Thurs., Nov. 14. The by-invitation-only reception also honors BAPA donors giving at levels of $500 and up, and this year will be held in the John H. Vanderpoel Gallery at Ridge Park.

The Hampers were recruited to the VAA through a friend, the late George Ralston, who recognized the talents that the couple possessed and the Association needed.  Ralston was right: the Hampers’ dedication to the VAA has been unmatched.

Grace, who always had an interest in the arts, joined VAA in 1989, once the couples’ four children were grown. Grace summed up her experience with the VAA as “years of joy.” Through her work at the gallery, she has helped to curate the art, prepare exhibits and help wherever she has been needed. “I’ve met lots of interesting people from the art world,” she said.

Sid joined the VAA in 1992, following his retirement from a successful career at the Chicago Board of Trade and as a lawyer in private practice. He was a teenager when he started working as a runner at the CBOT, and in the early 1950s became a trader. He is still a CBOT member and served ten years as a director. In 1958, Sid earned a law degree. In addition to this career as a trader, he opened a law practice with partner. He specialized in wills, probate, commodities and security law, and as a qualified trade advisor. Conveniently, the law office was located in the CBOT building.

Sid’s expertise in finance and law were pivotal in raising funds needed to protect the Vanderpoel Art Association collection in perpetuity. He cultivated donors whose generous gifts made it possible to provide for the future of the collection and to underwrite important art conservation efforts, including the cleaning and restoration of about 30 art works. The VAA continues to preserve art, working with top quality art restorers.

The outstanding art collection is named for Dutch-born artist John H. Vanderpoel who lived in North Beverly while teaching at the School of the Art Institute. Following the artist’s death in 1911, community residents took up a collection and purchased Vanderpoel’s painting “The Buttermakers.” In 1914 the painting was placed in Vanderpoel School as a tribute to the artist for whom the school – and the street where it’s located — was named. It was later decided that a memorial collection of works would be an even better honor. Vanderpoel was beloved by his students, many of whom were eager to donate their works to the collection.

Many of the paintings in the collection were donated by artists or owners. “A lot of the paintings were in people’s homes,” Sid said. He explained that the first curator of the collection – John Campbell – would write to Chicago area artists asking them to donate pieces of their work. And they did. Paintings, drawings and sculpture arrived at Ridge Park. The file of Campbell’s correspondence documenting this fascinating aspect of the gallery’s history still exists.

When the collection had grown too large to be housed in the school’s gallery, a new wing was built on the Ridge Park field house, creating a permanent home for the John H. Vanderpoel Art Association collection.  The collection of what is now more than 600 19th and 20th century works by American artists also grew in reputation. Counted among the artists are Mary Cassatt, Maxfield Parrish, Grant Wood, Daniel Chester French and Vanderpoel, whose work, “The Buttermakers,” is still on display.

At the gallery almost every day for many years, Sid also dedicated important time to research and myriad other important tasks that illuminate, protect and benefit the art collection.  Many people – from the community and beyond – recognize the Hampers as the faces of the Vanderpoel collection. In fact, when Chicago Magazine profiled the Vanderpoel Gallery Feb. 2018, Grace and Sid Hamper were interviewed and appeared in the photograph.

At age 88, the couple is no longer in the Ridge Park gallery every day, but they remain involved as tremendous resources and keepers of the collection’s history.

“Grace and Sid Hamper have shown an extraordinary and steadfast commitment to the care and preservation of the John H. Vanderpoel Art Association’s art collection,” said Irene Testa, current VAA President. “Their leadership has been crucial to the success of the organization.  We are profoundly grateful for their efforts to preserve this valuable art collection for posterity.”

For information on how to support BAPA at the Community Support Circle and higher levels, contact BAPA Executive Director Susan Flood, 773-233-3100.

PrevPreviousHow to Integrate a Chicago Neighborhood: In three (not so) easy steps.
NextSurvey Looks at Metra Rock Island Ridership  Next