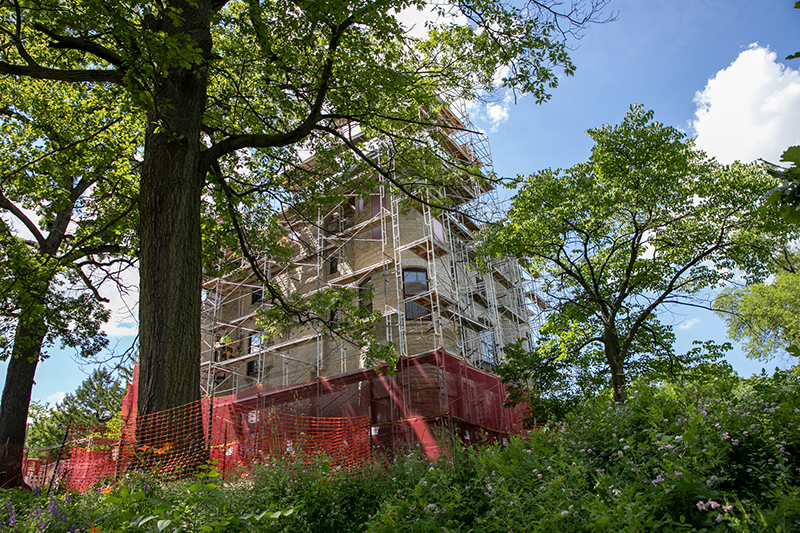 More than 130 years after the Givins Beverly Castle was initially constructed, it is undergoing an essential restoration process to ensure the longevity of this iconic neighborhood structure, the only castle within Chicago’s city limits.

Thanks to the generosity of numerous donors, and key grants from groups dedicated to preservation, the Castle Restoration Task Force met its ambitious fundraising goal and work began on the crumbling turrets and roof in June 2020.

The Beverly Review is working on producing videos from the Castle restoration architect, who is documenting the renovation from the roof. As the stones come down piece by piece, they are laid out, photographed and labeled to ensure they are put back exactly where they belong. The three turrets, of three different sizes, are known as Papa, Mama, and Baby.

The restoration journey began three years ago, when a crack was found in one of the turrets. After a structural safety review, the turret was temporarily shored up to prevent additional damage and to ensure the safety of those walking near it. In 2018, another crack was found in a second turret, and once again a temporary fix was applied for safety reasons.

The Beverly Unitarian Church, located within the castle, provides regular maintenance of the building; however, the church members knew that the only way to raise the much-needed funds for a complete restoration, they would need the community’s help.

Jean Hardy Robinson co-chaired the fundraising side of the task force with Stacy Recht, while Carolyn Wilbon headed the operations side.

“We started by asking the congregation, known as the Castle Keepers; this small congregation pledged $400,000 over a three-year period, which is amazing,” Hardy Robinson said. “We decided to ask the community to help us reach our goal of $1 million. We now have enough money to do the work from the roof up, which is the dangerous part of the project and essential to ensure the turrets don’t fall down.”

Other big donors include the State of Illinois’ “Build Illinois” capital project which provided a grant worth $300,000; an anonymous donor who committed $100,000; and the Adopt-A-Landmark Program which awarded the project a $240,000 grant. Approximately 200 individuals in the community pledged to the project.

Hardy Robinson expects work on this initial phase to be completed by October or November, which of course is dependent upon the finicky Chicago weather. “There’s some things they cannot do after it gets below 40 degrees at night,” she said. “We’re seeking to raise an additional $150,000 this building season so that work can begin on the problems in the stones in the walls and around the windows, which the crew has discovered since they began working.”

Future projects include installing an elevator and adding drainage/landscaping to prevent water from entering the building. This will be accomplished through ongoing fundraising efforts. The last time a major construction project happened at the Castle was sometime in the mid-1980s.

“There will always be things that old buildings bring up and surprise you with!” Hardy Robinson said. “The Castle is a community resource, not just a church. We are looking forward to celebrating inside and on the lawn for years to come.”

To find out more about the restoration project, or to donate, visit GivinsBeverlyCastle.org. Be sure to purchase the book “Chicago’s Only Castle” written by Errol Magidson from Bookie’s to find even more details on the Castle’s rich history.