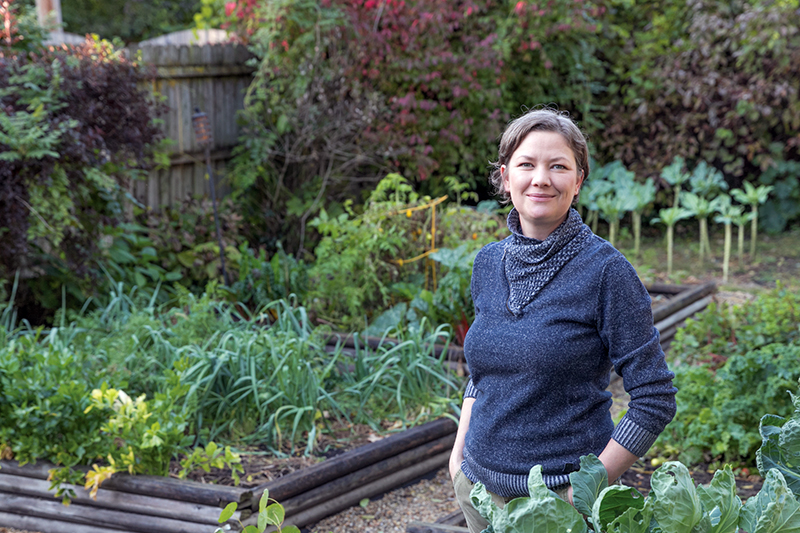 Rashelle Strate is too nervous to drive on the highway, so she drives from her home in Beverly/Morgan Park through South Side neighborhoods to get to her job as a florist and gardener. During her commute, she noticed the lack of grocery stores in many South Side communities. As an avid home and professional gardener, she realized her home garden surplus could make an impact in the Englewood community, and the Beverly Farmacy was born.

“Food justice and food equity is important to me, and I tried to think of a way to do something with my skills to help those affected,” Strate said. “I already had a home garden, and I decided to reach out to others in our area through Facebook to ask for them to donate a portion of their surplus.”

The Beverly Farmacy is a collective of home gardeners who donate a fresh vegetables produced in their home gardens. Strate connected with the food pantry run out of St. Sabina Church in Englewood, which encouraged the donations since fresh produce is often difficult to come by for food pantries.

“I chose St. Sabina because it’s in a neighborhood that is a food desert, and, although I am an atheist, I appreciate Father Michael Pfleger’s activism,” Strate said. “While the pantry gets many donations of canned goods, they didn’t get a lot of fresh produce. I donated what I could and now that Beverly Farmacy is headed into its fifth year, we are donating more and more.”

This past summer, Strate pulled up most of the grass in her yard to plant even more vegetables. She has 12 raised beds, more plants directly in the ground, and her front yard and parkway are also dedicated spaces for growing vegetables.

Beverly Farmacy members drop off their extra produce at Strate’s home each week. Then the real work begins. Strate spends approximately 20 hours a week harvesting her own garden, and washing and sorting the collected vegetables. She delivered two large carloads of produce to the food pantry each week.

Recently, Strate was awarded the Chicago Excellence in Gardening award in the “urban farm” category.

“I entered the contest to get more exposure for the Beverly Farmacy, and to get more people to join. I also wanted people in other neighborhoods to get involved as well, and I can help them set it up based on the model we perfected here,” Strate said. “By doing this, we tread more lightly, reduce waste, remove food deserts, reduce food injustice, teach ourselves and our kids about where food comes from, and build communities.”