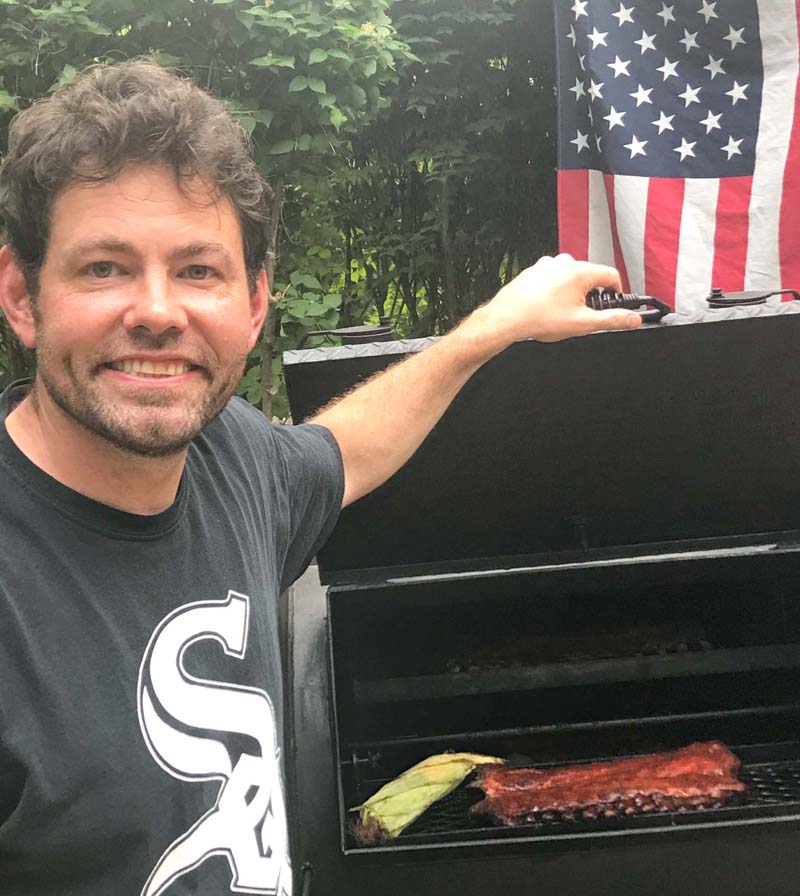 Beverly/Morgan Park resident John Fitzpatrick has been honing his BBQ skills for years and shares some of his best tips to ensure your ribs are the best at every backyard BBQ and block party this year.

Fitzpatrick is an amateur rib smoker who dedicated many summers to replicating his favorite restaurant-quality recipes, until he ultimately began concocting his own way of smoking racks of ribs.

He’s taken his hobby to the competitive level, participating in the Memphis in May World BBQ Championship Cook-Off as the Smoke n’ Beers team, competing against BBQ masters from around the world.

“I had a big custom rotisserie pit mounted on a trailer that I could jam about 16 racks in at a time,” he said. “But it looked like a toy compared to the huge rigs, some two stories high, that the guys in Memphis were using… but overall, it was just an awesome experience.”

When he first discovered ribs as a kid, Fitzpatrick loved the classic Homestead restaurant at 122nd and Vincennes. “They closed down when I was in high school and left me with the same feeling the ’85 Bears did after their one Super Bowl victory,” he said. “I kept waiting for them to reopen and they never did!”

That disappointment sent Fitzpatrick on a life-long quest to find ribs just as good as Homestead’s. About 15 years ago, Fitzpatrick and his wife stopped at the 17th Street Bar & Grill in southern Illinois and he was swept away by the ribs he ate there. After chatting for over an hour with the owner, Fitzpatrick was inspired to buy his own smoker and start creating his own ribs at home.

For those embarking on the home smoker/BBQ rib experience, Fitzpatrick recommends first heading to County Fair to pick up some great ribs. His favorite commercial sauce is Dreamland Bar-B-Que from Birmingham, Ala., and his favorite commercial dry rub is Ploughboys BBQ Yardbird Rub. Or, check out the recipe below to make your own dry rub, courtesy of Fitzpatrick.

Once the ribs are ready to cook, the challenge is to make sure they’re cooked through without having them dry out or char. Sometimes, Fitzpatrick warns, people will take the ribs off and they’ll be perfect, but they will dry out and taste burnt after 45 minutes on the buffet table. To combat this problem, he advises cookers to wrap the ribs in aluminum foil for the last third of the total cooking time.

Fitzpatrick cautions against putting a can of water into the cooker or partially pre-cooking the ribs in a pan with water on the bottom since the ribs “will taste like you pulled them out of the dishwasher.”

To get Fitzpatrick-worthy ribs, check out his carefully crafted rib cooking schedule;

Mix together and rub on ribs before cooking.

5 hours, 25 minutes before serving: Start smoker and get it to 250 degrees

4 hours, 25 minutes before serving: Put ribs on smoker, meat side up

1 hour, 55 minutes before serving: Foil ribs, meat side down and add braising liquid

1 hour, 45 minutes before serving: Put ribs back in smoker

5 minutes before serving: Plate the ribs then serve.