To earn the rank of Eagle Scout in the Boy Scouts of America (BSA), a scout must develop a service project that will enhance their community, and more importantly, lead fellow scouts in accomplishing it. When Eddie Burke, an Eagle Scout prospect and rising Brother Rice senior, began brainstorming, he knew he could get some inspiration from his aunt, former BAPA executive director Margot Holland.

“Through my aunt, I was able to hear about the volunteer opportunities for BAPA, especially with the Ridge Run,” Burke said. “She connected me with [current BAPA Executive Director] Mary Jo Viero who was able to give me some additional guidance.”

Burke met with Viero for a tour of BAPA’s space, and spent some time writing his proposal to help BAPA with multiple improvement projects. “We are going to paint the community room to make it look nicer, and we are going to clean out and organize the storage rooms at BAPA to make it easier to pull out the items needed for specific events,” Burke said. “We may also be able to do some gardening projects outside of the offices, but that will depend on how many people I can have working at once,” due to the coronavirus meeting group size restrictions.

Burke said the most difficult part of coordinating his Eagle Scout project was writing the proposal for BSA to approve. Aside from determining which project to pursue, he had to think about the number of hours it would take and be incredibly specific about how this project will benefit the community.

“The main point of an Eagle Scout project is to lead other scouts to prove your leadership abilities,” he said. “Being a leader and showing others the right way is really important, especially when we’re leading the younger scouts who look up to us.”

A graduate of Christ the King School and member of BSA Troop 608, Burke became involved in scouting after his friends encouraged him to give it a try. “Many of us stuck with it over the years and have so many good memories. Scouting is really fun, it doesn’t always have to be working toward the Eagle, although it’s an amazing accolade that I’m happy to achieve,” Burke said. “It’s also great experience to be an older scout and show the younger kids how to be a scout and have fun.”

Each potential Eagle Scout must come up with their own project, as well as help their fellow scouts who are working to achieve their own rank, so Burke and his friends will be very busy this summer as they work on completing their service projects. “It was hard when I thought about what I could possibly want to do that’s big enough to help the community,” he said. “We each earned 20 hours of service to earn the ranks leading up to Eagle Scout, and it’s great to give back to our community.”

Some of Burke’s favorite scouting memories take place during the summer at Owasippe Scout Camp in Michigan. “Our troop is able to camp on Hiawatha Beach, which is outside of the main scout base camps. We have the freedom to work on whatever badges interest us, and we do all of our own cooking, tent setup, patrols, and everything else,” he said. “We really learn how to survive on our own and the friendships I’ve made during these experiences are incredible. Hiawatha is so mesmerizing; you’re out in the wilderness without your parents and it’s an amazing experience.” 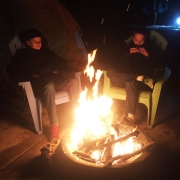 Camping Out at a (Social) Distance