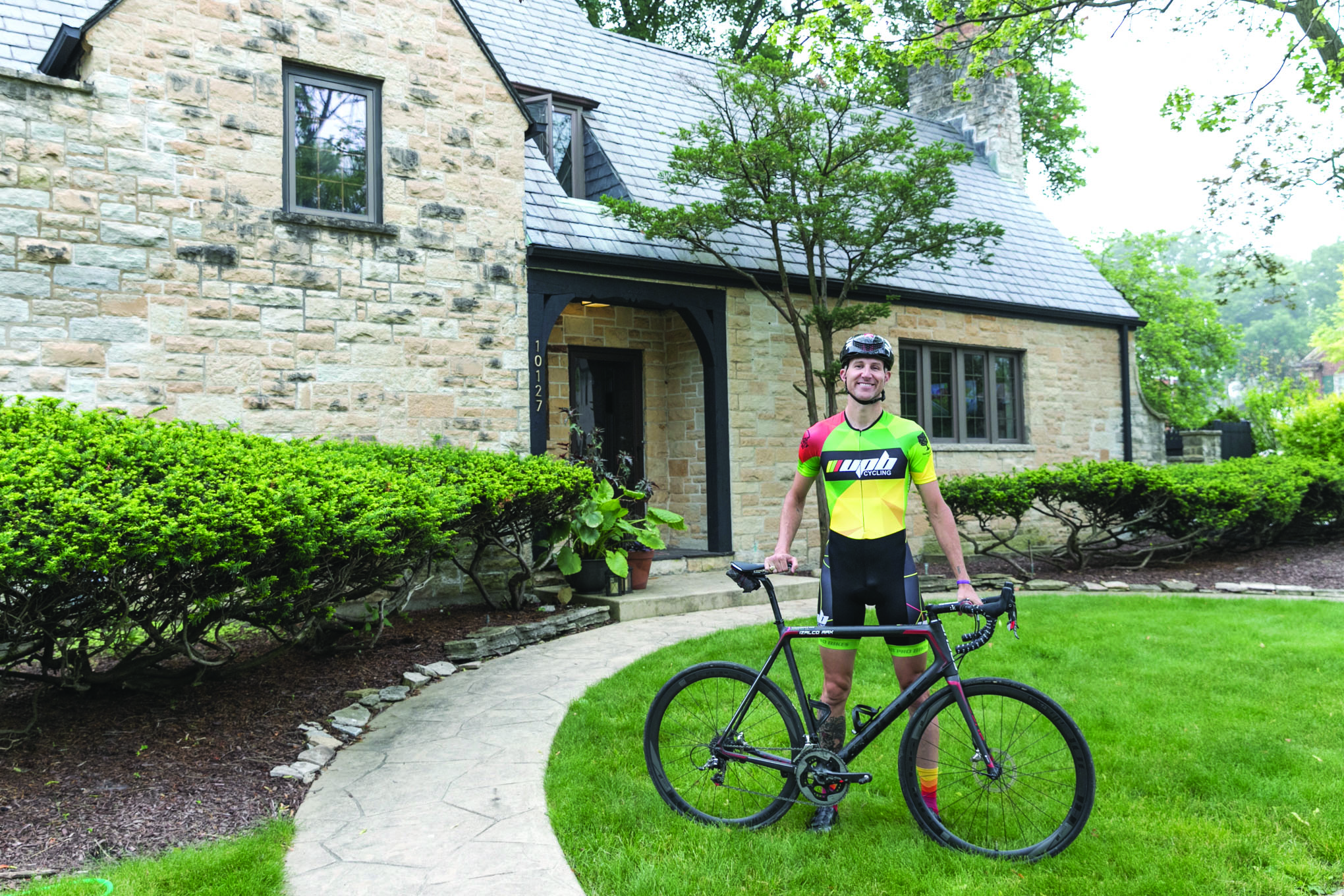 When the riders in the Beverly Hills Cycling Classic line up for the Masters’ race on Fri., July 19, Beverly/Morgan Park neighbor Dr. Brandon Conine will be making his debut in criterium racing. How does Conine manage to switch gears from his demanding job as an Emergency Room physician at Metro South Hospital and busy family man and father of two to a demanding training schedule for an elite cycling event that draws rides from around the globe?

It seems like he’s as adaptable as he is hardworking.

Conine and his wife, Maura Conine, owner of Capsule Chicago clothing store on Walden Parkway, have two sons, Liam, 5, who just finished kindergarten at St. Barnabas and will start 1st grade at Sutherland in the fall, and Jude, 3, who will be enrolling in preschool in the fall.

The whole family bikes, just for fun and to get to neighborhood destinations like Maura’s store and out to dinner. But Brandon has taken riding to a higher level – that level is known as Cat 3.

Race categories are set by USA Cycling determine the events for which competitors qualify. The lower the category the higher the qualification. The Beverly Hills Cycling Classic stages Cat 1, 2, 3 races — the highest levels.

Conine started out riding for enjoyable exercise toward the end medical school. “The Tour de France or something like it must have been going on because I thought I’d like to give [cycling] a try.”

When he moved to Ohio for a four-year residency in Emergency Room Medicine at the University of Cincinnati, Conine found friends to bike with and started on his way to becoming an avid rider. He and Maura, who grew up in Beverly/Morgan Park, moved to Chicago four years ago. Following the move, Conine changed his focus from cycling as a sociable form of exercise to training for and competing in races.  He has competed in more than 100 racing events. “It’s a lot of fun if you’re doing it well,” he said with a smile.

Motivated by the change in the race course for BAPA’s Beverly Hills Cycling Classic last year that now brings the racers zooming past his house, Conine decided to work hard to meet one of his goals: to qualify as a Cat 3 rider and participate in the Classic.

The Beverly Hills Cycling Classic is the first of ten days of racing in the Prairie State Cycling Series Intelligentsia Cup. Conine not only qualified as Cat 3 rider for the local race, he qualified to compete in the omnium — all ten days of the race series.

Criterium road races like the Beverly Hills Cycling Classic are lapped races done on closed circuits that range from one to two miles – the local race is 1.54 kilometers, slightly under a mile. Conine will be racing in the Masters’ race, starting at 5:45 p.m. and lasting 40 minutes. At times, he will be riding at 30 to 35 mph on straightaways, and even faster going down the hill.

He expects a crowd of family, neighbors and friends to be cheering him on from his front yard.

In order to be ready to compete on July 19, Conine has been training about 10 to 12 hours a week since March, fitting in his riding around his work and home schedules. He has been practicing on the local route, up and down the hills, and making the sharp turns that will be required in the race which could attract more than 100 professional and elite amateur riders.

The speed at which these steely-nerved competitors are riding is stunning when you’re standing on the sidelines feeling the breeze as they go by in a blur of brightly colored jerseys. Isn’t that scary? Conine says no. “It’s scarier to go slower than faster,” he said, explaining that the faster the cyclists are going, the better the momentum keeps the bikes straight and upright. In his racing experience, Conine has crossed handlebars with another speeding bike and managed to get free without consequence. “Of course, there have been plenty of crashes, stories and scars to get this far,” he said.

Conine has competed in road racing, cyclocross (including the races at Dan Ryan Woods) and a little mountain biking. His competition history includes a 110 mile race at 10,000 feet elevation in Colorado and a 105 mile race on all gravel roads in the middle of Kansas.

Competing in the Beverly Hills Cycling Classic is a thrilling new challenge. “The best part of this ride is that it’s fun to do something you’re not sure you can do,” he said. “I’m really excited. I’ve worked a long time on this.”