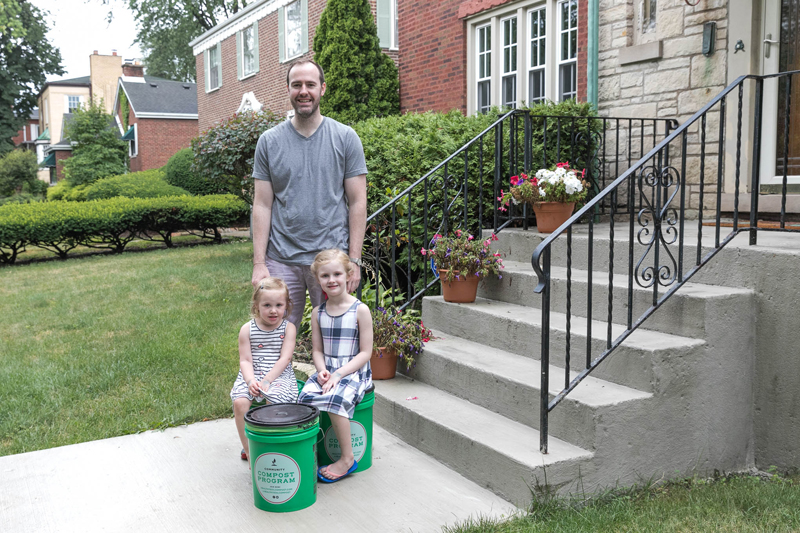 “Going Green” is a common phrase, but what does it mean? For Beverly/Morgan Park resident Marty Walsh, the answer is composting, which is why he decided to join forces with Healthy Soil Compost, a Chicagoland composting service. Healthy Soil Compost partners with licensed organic recyclers to turn local, organic waste into nutrient-rich energy that increases soil health and reduces the amount of waste going to landfill.

“Composting is an easy way to develop a more sustainable approach to city waste disposal,” Walsh said. “And it’s great for the environment.”

According to Walsh’s sources, 30 percent of waste currently sent to landfills is made up of organic compostable materials. This waste often consists of food scraps, paper towels, coffee grounds and paper. With numbers like these, the Illinois Environmental Protection Agency estimates the state of Illinois will run out of space for garbage in the next 20 years, according to the Chicago Tribune.

“It’s pretty terrifying,” Walsh said. “That’s why it’s important to make sure that if something can be recycled, it gets recycled.”

Unfortunately, it often doesn’t. According to the EPA, 38 billion tons of food waste was generated in 2014, yet only 5% was recycled/composted.

But it’s about more than saving space. The amount of organic food waste sent to landfills levies a rather heavy environmental tax: When the waste decomposes, it produces methane gas, which accounts for 10% of the greenhouse gases emitted into the atmosphere.

“Organic waste can play a major role in climate change,” Walsh said. “Most people don’t grasp the harm of throwing away food or other recyclable materials.”

And it happens a lot. The USDA estimates that Americans throw away approximately 20 pounds of food waste a month per person.

The need to compost is clear. But how does one go about composting? That’s where Healthy Soil Compost comes in. The company provides customers with a compostable bag and a five-gallon bucket with a lid to collect organic waste. The customer is given a new bag and bucket upon collection. Monthly plans start at $20 and customers have the option of monthly collection, twice monthly collection or weekly collection.

Once the waste is collected, what happens to it? Healthy Soil Compost hauls the organic waste to a licensed organic recycler (a worm farm) who turns it into nutrient-rich compost for community urban farming.

“We’re hoping that once people learn how easy it is then they’ll want to participate,” Walsh said. “It really is in everyone’s best interest.”

PrevPreviousMidnight Circus in the Parks Coming in September
NextBusiness NewsNext