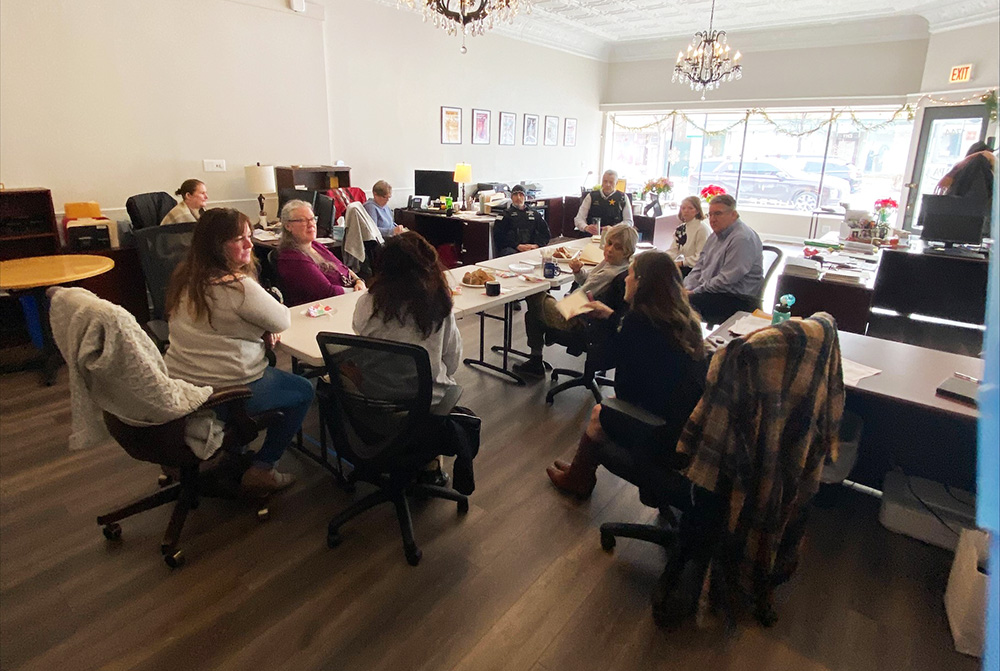 When BAPA moved its offices to the 99th Street Train Station business district, staff quickly began to enjoy being among the busy shops and friendly owners. A few recent incidents of indecent exposure on this quiet street prompted a meeting with Commander Sean Joyce and Officer Nick Pienta of the 22nd District police and nearby business owners at the BAPA office. The discussion underscored the important role of communication, connection and cameras play in community safety.

No other incidents have occurred in this business corridor, but sharing what was learned at the meeting may help other neighbors prevent criminal activity or respond quickly and effectively if they witness a crime.

One of the recent incidents occurred outside of BAPA’s office. Staff immediately called the 22nd District Police, who said to hang up and call 9-1-1.

Tip #2: Provide the police with as much information as possible about the offenders clothing, distinguishing details, direction in which they fled to help them identify the offender.

Because the BAPA office has surveillance cameras, the offender had been caught on video, and copies of his photo were shared right away with the police officer who answered the call, along with a description of the offender.

Tip #3. Talk to your neighbors.

In the days following the incident, BAPA staff discovered that the same crime had also occurred at a neighboring business and a few blocks away. Store staff also called 9-1-1. Police were able to share the image of the offender from BAPA’s cameras, which helped to establish that the same offender was involved in all three incidents. Another business owner confirmed that she had also seen the offender outside her store.

BAPA set up the meeting to expand business-to-business communication and get an update from the police, who are investigating the incidents and covering the area with increased patrols. A lot was learned about quick reporting and shared information help the police do their jobs.

The surveillance camera images from BAPA are posted in the 22nd District’s Strategic Decision Support Center (SDSC) and have been shared with officers, providing  good image from which the offender can be identified.

The police recently installed a Police Observation Device camera at 99th Street business district. POD cameras can provide 360 degree views, and can zoom in to capture license plate numbers and other physical details that can help identify offenders. The cameras are very effective, but, according to Commander Joyce, they can’t replace reports from witnesses – the “eyes and ears” of the police.

When it comes to preventing or solving crime, Commander Joyce said, “the basics are immensely helpful.”

When you call 9-1-1 be specific about what is suspicious, so the report is prioritized for dispatch.

Let people know you call the police; most criminals avoid places where they know people are watching and ready to dial 9-1-1.

Let people know you call one another. Business and residential neighbors should have one another’s names and phone numbers so they can share information quickly (make sure you call 9-1-1 before you text your neighbors).

Don’t make it easy for criminals: Lock the doors on your car, garage and house.

Take advantage of technology. Ring cameras are helpful to police.

For non-emergency issues or questions, reach out to the 22nd District CAPS office at 022district.CAPS@chicagopolice.org.

PrevPreviousSafety Update: Neighbor-to-Neighbor Communication Increases Safety
NextHelping Kids and Families Emerge During and Beyond the Pandemic Next