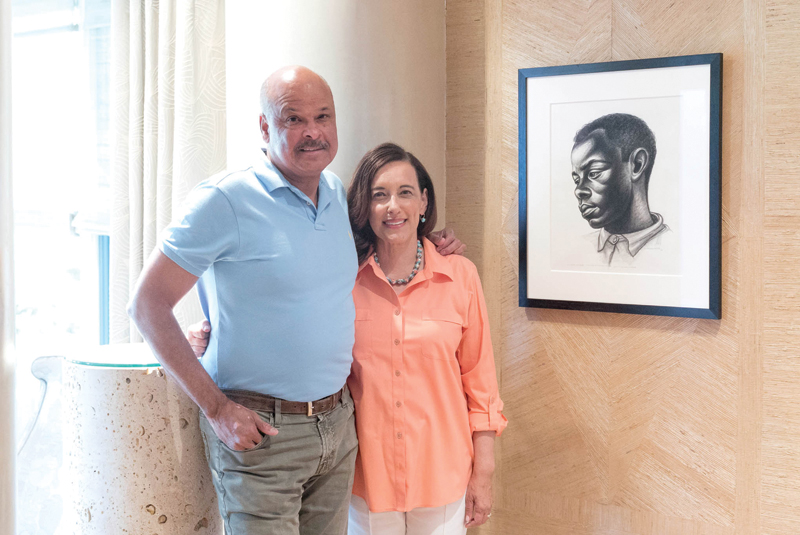 When Gary and Denise Gardner moved to their Beverly/Morgan Park home in March 1982 they had already started buying original works by African American artists, but it wasn’t until nearly 20 years later – once the children were out on their own – that the couple became serious about collecting.

“We decided to restore the house into an ‘adult’ place, not a place just about kids or hockey sticks,” Denise Gardner said. When she retired, Denise Gardner had time to travel and visit galleries and art fairs, discovering and learning about artists and their work. Now that her husband is semi-retired, they travel together, “learning, appreciating, collecting,” she said.

A few years ago, they put an addition on their hilltop home, providing more space for their 100+ works of art, including works by Chicago artist Charles White (1918-1979).

In many ways, White’s work embodies the beauty and intent of the Gardners’ outstanding collection. White grew up on the South Side and used his talent and tenacity to fight against racism by portraying African Americans with dignity in the context of universal themes. He started as a student at the School of the Art Institute of Chicago when he was still in high school, and became active with the South Side Community Arts Center, establishing himself as one of the most prominent artists to come out of the Chicago Black Renaissance of the 1930s.

“White is the leading African American Artist from Chicago in the 20th century,” Denise Gardner said.

The Gardners are Lead Individual Sponsors of “Charles White: A Retrospective,” the first major retrospective for the artist in 35 years, open through Sept. 3 in the Modern Wing of the Art Institute.

The exhibit features more than 100 of White’s powerful and purposeful representational drawings, paintings and prints which interpret African American history and culture.

As a member of the Art Institute Board and a member of the Leadership Advisory Committee (LAC), Denise Gardner was among the people who encouraged the AIC to acquire a sketchbook of works by Charles White, and to start the conversation that has culminated in the Charles White Retrospective. The purpose of the LAC is to support diversity in the AIC vision, collections, staff, exhibitions and audience. White’s work fits squarely into that mission.

And the timing was right: “[White] would have been 100 this year,” Gardner said.

Mounting the exhibit presented challenges. The African American artists of the 40s, 50s and 60s did not get the recognition they deserved. Co-curators from the AIC and Museum of Modern Art (MoMA) in New York, where the Retrospective will go next, needed to do a lot of research in the three cities where White lived and worked – Chicago, New York and Los Angeles – to develop a definitive catalog of the artist’s work and exhibitions. That catalog provides an important resource for students, collectors and art historians.

The Retrospective covers all four decades of White’s career, showing his development as an artist, social activist and eloquent documenter of the dignity of African American people, culture and history. The exhibit goes to MoMA in October then to the Los Angeles County Museum of Art in February.

The timing of the White Retrospective is also right from an art collector’s standpoint. “In the past ten years there has been an explosion of extraordinarily talented living artists of color,” said Denise Gardner. The Gardners are adding works by younger artists to their collection, and seeing the connection of the generations of artists. White’s work, so reflective of the human condition, can be a powerful link in that connection.