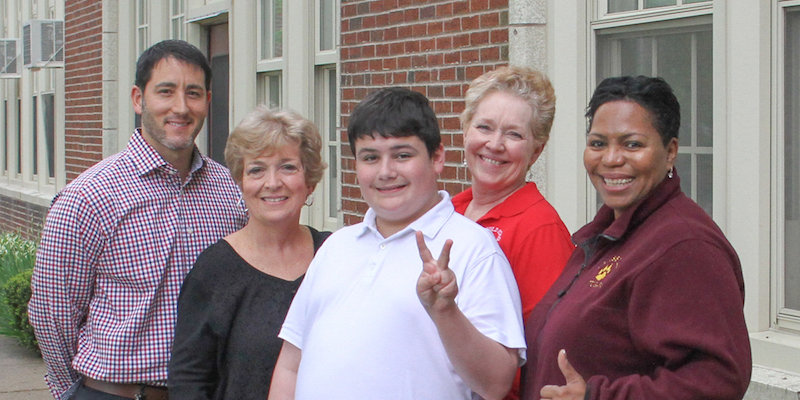 This story is about her oldest, Michael, an 8th grader, and about Chris’ abiding gratitude for special education teacher Dorothy Ziztka and the entire team at Clissold.

A lot of things come easily to Michael. He loves to read and usually has two books underway at a time. He has an encyclopedic memory for details about animals and insects, their habitats and continents. He readily presents information in interesting ways to schoolmates, and even brought a tarantula to science class this year. “He lights up during science,” Mrs. Ziztka said.

Other things hadn’t come as easily to him, like when in third grade he struggled to stay focused in a noisy, busy place. That is where the resourceful Mrs. Ziztka and Michael’s devoted paraprofessionals — first Kathy Gelsinor and later Carol Nick — enter this story. Clissold has a lower and upper school program for children with autism, which is why Michael transferred there in third grade.

Mrs. Ziztka calls her neat, comfortable and precisely arranged classroom the “No Excuses Zone.” It is where she fosters students’ independence in order to get them ready for the conventional classroom. Through persistence and hard work, this is exactly the path Michael took.  And that accomplishment is why Chris said, “He wouldn’t be where he is today without her. She is his biggest cheerleader and so helpful. She made me a better parent.”

Michael’s career goal is to become a naturalist and study animals in their habitat. He applied to attend the Chicago High School for the Agricultural Sciences next fall, and all agree it would be a perfect fit for a boy with his passionate interests.

After achieving the right test scores, admission is decided by lottery, and hard work alone wasn’t enough; luck also had to be on Michael’s side. It didn’t cooperate, which has left his plans for high school this fall still up in the air.

As Michael’s team/fan club shared stories of time they spent with him since third grade, tears glistened in the eyes of everyone at the table. The accolades tumbled out.

“He went from a solo operator to a social butterfly!”

“A sweet, wholesome kid who has huge fan club here.”

Michael already has much to be proud of at his young age. He has made a big impact at his school and impressed people who clearly care very deeply about this extraordinary young man. Best of luck, Michael.