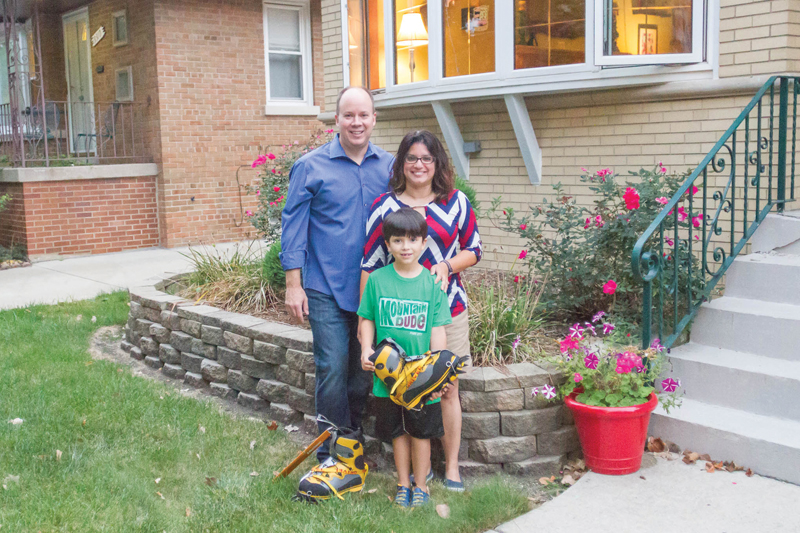 Terry Herr is turning a personal goal into a charitable endeavor. An accomplished hiker and climber, Herr decided to check off an item on his bucket list, all while raising money to support children in foster care through the Children’s Home and Aid Society of Illinois. In May, Herr will climb to the Mount Everest Base Camp in Nepal and attempt to summit Kala Patthar (18,514 feet elevation) and Island Peak (20,305 feet elevation). With the help of the community, his fundraising goal for Children’s Home and Aid Society is $29,029 — or the elevation of Mount Everest.

Herr’s campaign is called “Cairn for Kids,” and 100% of the funds raised will go directly to Children’s Home and Aid. “A cairn is a pile of stones used by hikers and climbers to mark the trail,” Herr said. “Foster children need ‘cairns’ in their lives to guide their path.”

Herr says he always found Mount Everest fascinating and tossed around the idea of climbing it for years. After discussing it seriously with his wife, Carla, Herr decided it was time to take on the climb.

“I knew that if I was going to do this, I’d have to also do something for charity,” he said.  As a project of the Beverly Hills Junior Women’s Club, Carla was involved in collecting 800 pieces of luggage for children in foster care with Children’s Home and Aid Society, and she won a Make a Difference Day award from USA Today for the luggage drive. The charity is close to the Herrs’ hearts. “We learned more and more about the challenges faced by foster kids. My wife and I come from very large families; we’ve always had people in our lives to help us,” he said.

Knowing that there are children in foster care who may not have that support drives the Herr family to raise money and awareness. “Picture a child entering the foster care system. Their parents are no longer involved, for whatever reason, they move an average of eight times, and each time they move, there is excitement about the potential of a new stable home, anxiety of a new house and people, never really feeling comfortable in yet another stranger’s home . . . yet, they do it,” Herr said. “Everything they own is often put in a garbage bag. The bag sometimes breaks and they lose some of the few possessions they can call their own. It’s heartbreaking.”

Herr also feels anxiety about the climbing trip — and finding a group to go with. “It’s hard to describe the anxiety this has caused me . . . and I am only talking about one month of my life! These kids deal with this on a daily basis and never know when they might have to move again,” he said. “We all have various things that cause us anxiety, but the challenges most of us experience — while deeply personal — can be overcome. Not having a parent or stable home in early childhood, these kids need resources and to feel loved.”

Herr credits the great work of the Children’s Home and Aid Society in making a difference in the lives of children in foster care. “I was going to climb the mountain either way, but raising funds through the climb lets me be a part of their amazing daily efforts,” he said.

To prepare for the climbs, Herr attended Colorado Mountain School to gain some valuable mountaineering skills. “I’ve done rock climbing in the past, so I’m not unfamiliar with ropes and harnesses. But trying to climb a glacial mountain is different than a vertical rock face,” he said.

Herr will need crampons, a harness, ropes and an ice axe. The biggest challenge will be learning to hike in what are essentially ski boots. “My boots are ultra light, at about three pounds each. But I have to walk in a certain way in order to save energy for the climb,” he said.

After the flight, Herr will trek from village to village as he makes his way to base camp. “If the tea houses have room for you to stay, you can. But as you go up the mountain, the tea houses are more like plywood boxes — they’re fairly primitive by our standards. If they don’t have room, you camp in their yard, essentially,” he said. The climb of Kala Patthar is more of a walk on an incline; Herr won’t need crampons or be tied in. That will change once he summits Island Peak, where he anticipates hiking a significant incline covered in snow. While he won’t be traveling with a group, he will have the assistance of mountain guides.

Herr hopes to summit on his 47th birthday. In the meantime, he will continue to train and hold fundraisers. The first is Midnight at the Masquerade, a murder mystery dinner on Sat., Oct. 28. He will also sell Carson’s Coupon Books, and encourage the community to “adopt” families through Children’s Home and Aid Society at Christmas time. He also intends to hold a couple of community events in the spring.

Herr hopes people will become inspired to act due to the awareness surrounding the climb, either by donating money, items, or even becoming a foster or adoptive parent. “I want to hit my fundraising goal, but in the end if it just makes people more sensitive to these issues, then it’s worth it,” he said.