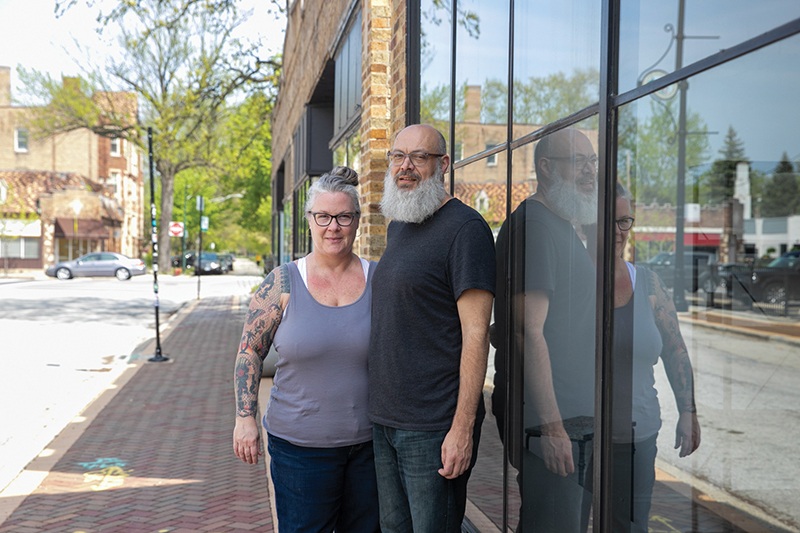 Mary Bujwid and her fiancé Jason Moss have been bringing South Side-inspired wares to the Beverly/Morgan Park neighborhood since January 2019.  Through their hard work and the support of the community, they will open Beverly Dry Goods bricks-and-mortar on Thurs., July 2 at 9915 S. Walden Pkwy.  (formerly occupied by Capsule).

“I truly feel that there is nowhere else in the city where we would be as successful as we’ve been in such a short time.  This community makes Beverly Dry Goods possible, and we feel a large sense of responsibility to provide them with products they can be proud to wear, use in their home, or give as gift,” said Bujwid.

In 2017, Bujwid and Moss moved to Beverly/Morgan Park.  They were drawn to the “clear sense of community” when they previously drove through on Moss’s motorcycle.  Bujwid explained that it was easy to tell, even just passing through, because “everyone smiled and waved, neighbors chatted in the street, families played in yards, [and] there were beautiful homes wonderfully kept and restored.”  They knew they wanted this for themselves.

Bujwid grew up in retail and always wanted to open her own shop. After moving here, she was inspired.  She found her “why.” “No one was celebrating how special this neighborhood and the people are, so I decided to take that on,” Bujwid said.

Bujwid and Moss have created a hyper–local line of candles, apparel and accessories with names that represent the neighborhood, “Walden,” “Longwood” and “Frunchroom,” to name a few.  They will be expanding their line to include beard balm, room sprays and diffusers.

Dog treats will be making their way into the store shortly following the opening (their line is delayed due to COVID closures) to accompany the bandanas they’ve created for our furry friends.  The store will not only carry items for your pet, but it will also be dog friendly.

Their desire to be pet friendly was not only inspired by their dog and the number of families with dogs in the community, but also because Bujwid had a vision for the store  “to be interwoven into the daily lives of customers and not just a place to go and grab something.”  She wants to be a spot for people to gather, to hang out, to feel at home.

Support your neighbors and South Side pride at the new Beverly Dry Goods location on Walden or online at www.beverlydrygoods.com. Follow their journey on Instagram @beverlydrygoods and www.facebook.com/beverlydrygoods.