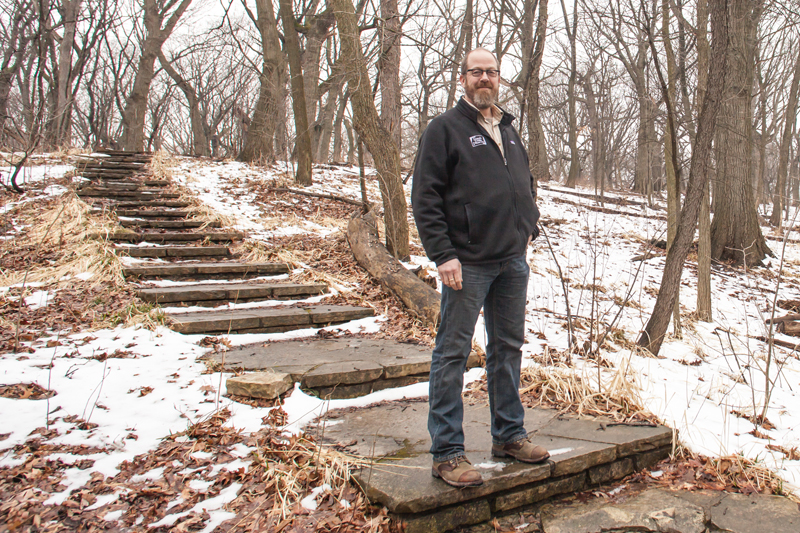 If you’ve enjoyed a day hiking or cross country skiing in Dan Ryan Woods, you can thank Beverly/Morgan Park neighbor Benjamin Cox and the Cook County Friends of the Forest Preserves (FOTFP) for their help in making sure the woods are beautiful, healthy and enjoyable.

Cox, now President and CEO of the not-for-profit organization, started working with the Friends when it was all volunteer, and in 2004 became the first paid employee. Today there are 25 FOTFP employees and thousands of volunteers.

“The concept of the forest preserve started in Cook County,” Cox said, adding that the district is more than 100 years old. It’s also the largest Forest Preserve District of any county in the state. “Something we should all celebrate,” Cox said.

Broadly, FOTFP advocates for and improves the forest preserves. Cox goes to all FPD board meetings, reviews the budget, and attends other meetings in different counties.

The group does ecological restoration work. Unlike parks and recreation areas, forest preserves are 80% natural, so their emphasis is nature. Removal of invasive species and other restoration and repair work is mostly done by volunteers. The Conservation Corps provides paid summer internships for high school students who want to work on improving the woods, and applications are now available. Work starts in June and leaders age 21 and up who are trained to work with the kids are also needed.

The FOTFP’s work and advocacy results in a terrific pay off for area residents who get to enjoy the peace, beauty and natural wonders of the forest preserves, as well as activities such as horseback riding, biking, rock climbing walls, fishing and camping – there are five campsites + cabins in Cook County.

Dan Ryan Woods is one of about a dozen locations being reactivated as gateway sites with visitor centers and activities to attract people to learn more about and use the forest preserves. Improvements supported by FOTFP are already in place.

At Dan Ryan Woods, a warming house built by the Civilian Conservation Corps (CCC) at the bottom of the toboggan slide during the Great Depression had fallen into disrepair and was boarded up. Cox brought the site to the attention of Forest Preserve District officials and suggested that the building be refurbished. Now it’s open and can be rented out for parties. The underpass that provides for safe transit under 87th Street has also been fixed up, and plans call for a visitor center there.

Cox and Larry Unruh are trained Volunteer Leaders, and they have lead the volunteer efforts in removing invasive species in Dan Ryan Woods for many years, working work mostly on about 110 acres south of 87th Street.  Cox explained that unlike parks and other recreation areas, 80% of the forest preserves are woods. For many years, the District didn’t do much to control plant life, but as the surrounding populations grew, non-native plants began to seed the woods, carried in by birds, on people’s clothes and other ways. Some of those plants grew unchecked, choking out the sun and creating thick, thorny growth. According to Cox, you should be able to see sky through trees. That open forest scape is returning because of all the volunteers’ hard work. “As we’ve opened up the woods, we’ve seen a lot more people using them,” Cox said. He’s pleased because, “nature is good for your soul.”

FOTFP holds volunteer workdays 9 a.m. to noon on the second Saturday of the month year around, and whether they can come once, occasionally or all the time, help from area residents makes a difference. Persons who want to make a bigger impact can be trained as volunteer leaders or even micro-stewards. Training for certification is provided; certifications cover a wide range of interests from seed collecting to leading work groups to using herbicides.

“Forest Preserve District volunteers have endless learning opportunities and ways to specialize as ‘citizen scientists,” Cox said. Special skills are not required, he added, using himself as an example: “I have a journalism degree and a passion for nature.”

Look for information on the FOTFP volunteer recruitment day as well as their annual wildflower walk this spring. FOTFP membership starts $25 a year and helps to insure that citizens have a voice in making sure our forest preserves last for another 100 years. Info: www.fotfp.org, benjamin@fotfp.org or 312-356-9990.