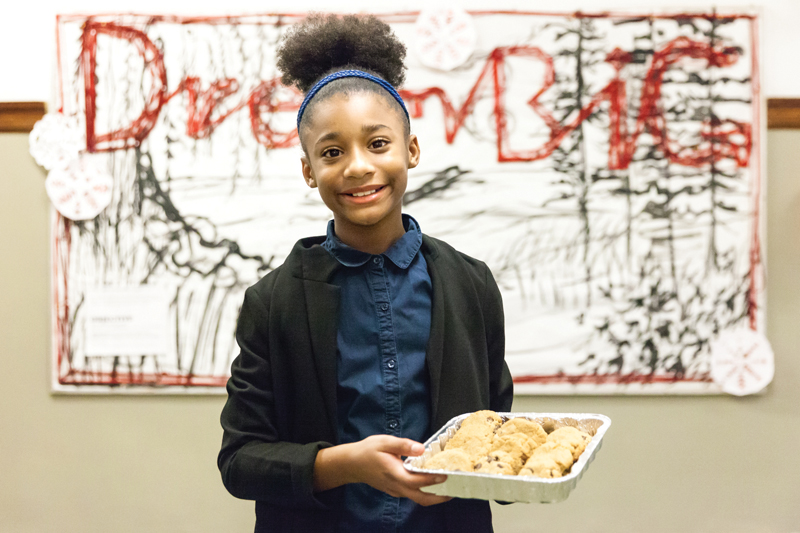 There’s a new MasterChef competitor in town — and she’s only 11. Barnard School 6th grader Na’imah Johnson is competing for the title of MasterChef Junior on the show’s fifth season which premieres on Thurs., Feb. 9 at 7 p.m. on FOX.

Johnson heard about the audition in 2015 and had her chance to prove her skills in front of producers. Now cast for the show, she’s competing against 39 other 8 to 13 year olds for the MasterChef Junior trophy and $100,000 grand prize. Competition judges are award-winning chef and host Gordon Ramsay and pastry chef Christina Tosi.

“I had a pretty good experience there, I got to meet a whole lot of new people who I’m still in contact with today,” Johnson said. “I was able to cook in front of a lot of great judges.”

Johnson has always been active in the kitchen, thanks to the encouragement from her mom, aunt and grandma. “I followed [them] around the kitchen at the age of six. Then around the age of eight I started to bake. By the age of nine I was allowed to use knives and the stove and oven so I really became more interested in cooking,” she said. “My aunt is a professional baker and I had some training from her, but I also watched videos on YouTube to learn more.”

So high was her commitment to her craft that Johnson opened her own bakery business, Na Ni Nu Batter Cakes, three years ago with her sisters Na’ilah, 13, and Nuriyah, 8. They bake their signature red velvet cupcakes for their family, teachers, friends and people from their church. “My favorite thing to bake is red velvet cupcakes, but my signature dish is cream cheese pound cake,” Johnson said.

Johnson is an eager student, very interested in math and science, which she says makes it easy to be a cook and baker. “Cooking involves a lot of [math and science], and I like all of those things,” she said. “I like to make new recipes and be in the kitchen with my family.”

Cooking is her daily hobby and she enjoys preparing meals for the family. “I make a cilantro lime chicken with cilantro lime rice that my dad really loves,” she said. And while she loves the creativity of cooking, the clean-up is definitely her least favorite kitchen activity.

Pour olive oil into large oven-proof skillet to cover bottom of pan. Heat over medium-high heat. Season both sides of marinated chicken with salt and pepper. Add chicken to hot pan, skin-side down and pour in the marinade. Sear until skin becomes golden and crispy, about 6 min. Flip chicken and cook for 2 min. more. (Chicken should not be cooked through).

Turn off the heat and transfer pan into hot oven; bake until the chicken is cooked through, about 10 to 12 min.

Serve with rice and drizzle with extra pan drippings.

Bring water to a boil; stir in butter and rice. Cover, reduce heat to low, and simmer until the rice is tender, about 20 min.