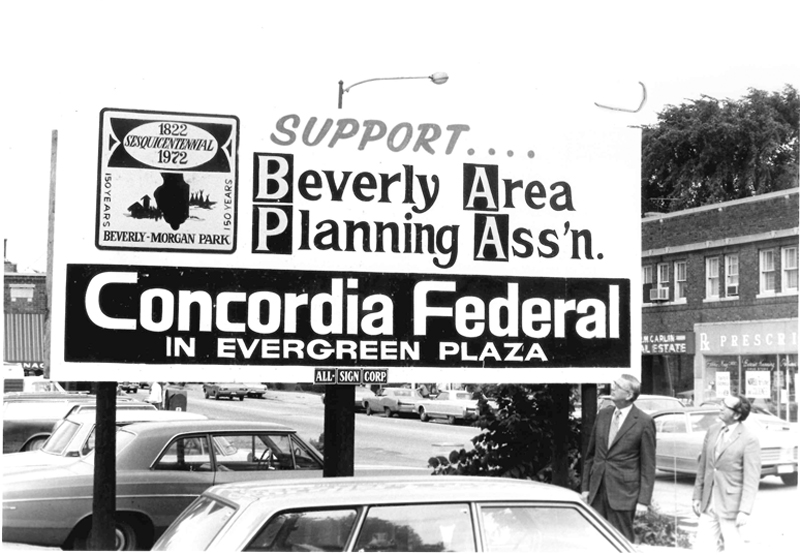 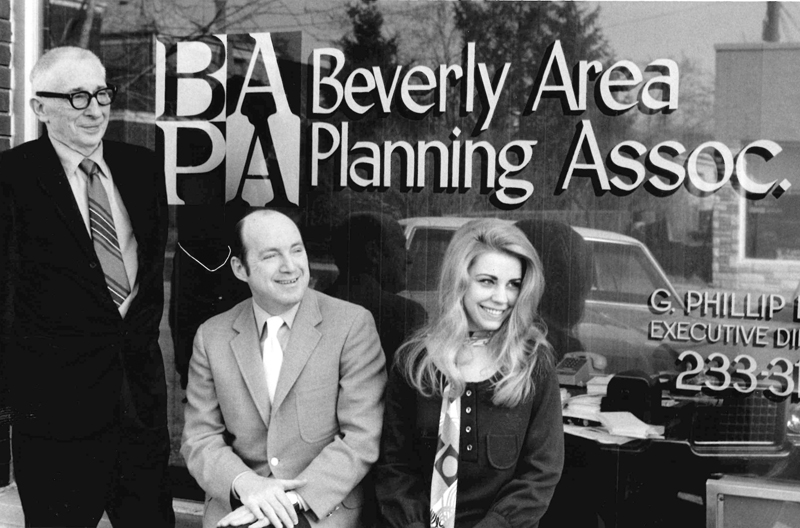 The summer of 1971 marked the change of BAPA from a reactive to a proactive role in the Beverly/Morgan Park community. Because of my role in that change in the form of my plan called Beverly Now, I was asked to summarize the event the 70th anniversary of the founding of the Beverly Area Planning Association.

First, recognize the importance of two related events. The Chicago City Council had approved the removal of the historic ban in residential deeds which had prevented the sale of a home to African-Americans. As a result, much of the South Side had changed racially, always on a block-by block basis, in response to pressure from “blockbusting” real estate sales people. Real Estate Research Corporation, highly- respected in urban research, had already forecast complete racial change within five years in both North Beverly and South Morgan Park and the balance of the community in ten years. Nevertheless, there was no discussion in churches or local media about the likelihood of racial change in Beverly/Morgan Park.

The other significant change was in the Catholic Church, through the influence of

Pope John. Activism by laity and young clergy was permitted, and in some cases like Christ the King in North Beverly encouraged. Christ the King had young activist priests and a structure including a Parish Council and a variety of committees.

But where did Beverly Now fit in?

In my personal frustration with this “head in the sand” failure to address impending integration, I penned a ten-page letter to the officers of my North Beverly neighborhood association, Beverly Improvement Association (BIA). In the letter I suggested addressing the subject with a new umbrella organization headed by a professional director, a community-wide organization accepting the inevitability of integration but not re-segregation. Their response was polite, but my proposal they saw as way beyond the scope of the organization, nor did they suggest I take it further.

Remember my reference to activism at Christ the King parish. Its Community

Relations Committee, of which I was a member, had successfully conducted an

Anti-Real Estate Solicitation sign-up within the parish. Trudi Dressel, the Committee chair, lamented to me that to really make a difference we needed a plan aimed at the entire community. Because I had the outline of such a plan in my letter to BIA, I offered to prepare one.

The result: a 20-page magic marker flip chart proposal which I called Beverly Now to stress its urgency. The proposal recommended coordinated programs in four areas: public relations, area-wide education, control of real estate practices and planned business activity. Also, it specifically called for showing homes to black buyers throughout the community and not next to an already integrated block.

Coordinating the activities would be an umbrella organization with a suggested annual budget of $75.000, headed by an executive director with a background in public relations who could inspire and organize an “army of volunteers.”

Then came the clincher: I asked that not only that Christ the King parish endorse Beverly Now, but also pledge $15,000 of parish funds toward its initial setup. The Council gave its approval with the caveat that the entire parish be exposed to the plan first.

Therefore, on the weekend of July 11 and 12, 1971, instead of a pastoral homily, I delivered the Beverly Now proposal from the Christ the King Church’s marble pulpit (since removed.)

As I spoke, the pages from my presentation were flashed on a large screen on the altar prepared by Fr. Jim Quirk, a young assistant. Despite the format and the controversial subject matter, at each mass the congregation burst into applause, a rare response then. A few days later the Christ the King Council approved the pledge.

Over the next couple weeks I was invited to make the Beverly Now presentation to several civic, church and synagogue groups, always well-received with implied eventual financial support. Then about July 25, I received a call from Arthur Baer, asking for a meeting. Arthur was president of Beverly Bank, then an independent bank at 103rd and Vincennes, and the leading citizen of the community. Without him and his wife Alice, neither Beverly Arts Center nor Ridge Historical Society would likely exist.

At our meeting, Arthur immediately concurred with the need for a new umbrella organization focused on impending change and broader community matters. Could BAPA – then an organization that focused on issues such as zoning and beautification — provide that structure in a different format? We agreed that rebuilding an existing organization, particularly one already fairly representative, would be expeditious and have greater acceptability.

On August 4, 1971 over 200 influential residents were invited to a meeting at the Beverly Art Center, where I was invited to give my last presentation of Beverly Now. Then Bob Seward, BAPA’s president, spoke announcing that BAPA would be re-structured to become a broad-based umbrella organization with much wider representation on its Board of Directors. A professional staff would be hired, and the organization would address the issues raised by Beverly Now.

Within a few weeks money was pledged by various institutions, mostly financial, to fund the new BAPA. Also, ten new more representative directors were elected including two women (a first), two clergymen– a minister and a priest — (both a first) and me.

Seventeen chairs were appointed of mostly new committees. As an example of community enthusiasm, the Public Relations Committee, of which I was chair, had 16 well-qualified members at its first meeting in December and it grew. Most important, by February after a nation-wide search G. Phillip Dolan was hard at work as BAPA Executive Director.

In retrospect, I say those three weeks in the summer of 1971 were truly a re-birth for BAPA. We are especially grateful for the five special people – Trudi Dressel, Fr. Ed Myers, Arthur Baer, Bob Seward and Phil Dolan. Each played a special role in our being able to celebrate BAPA’s 70 years.

Let us also celebrate their lives as we enjoy their legacy.