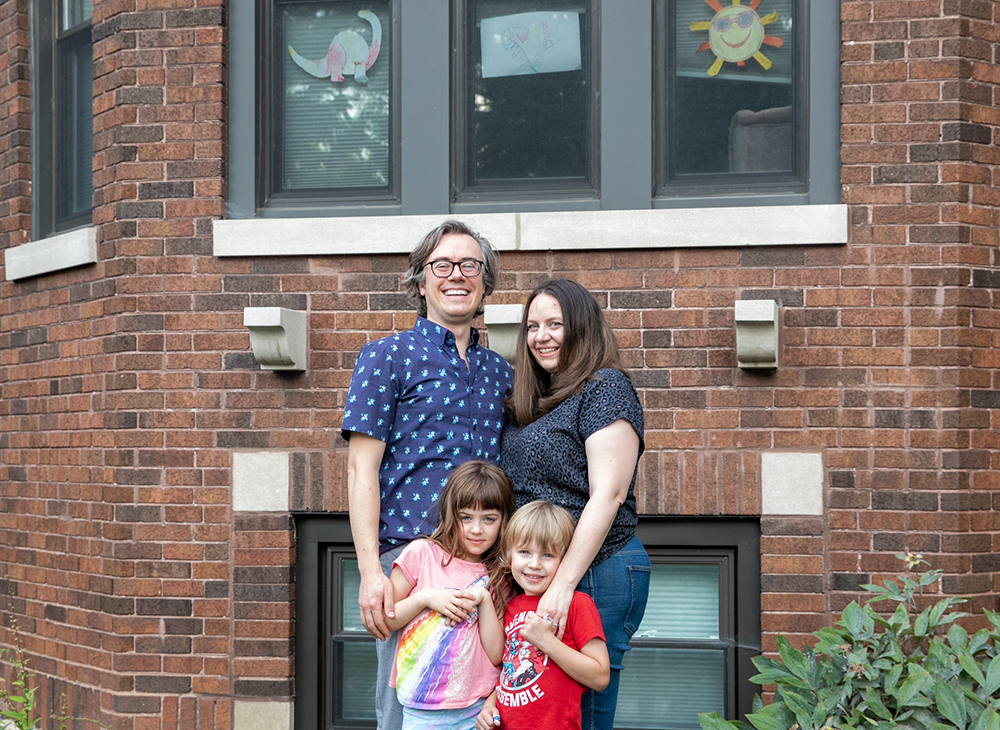 The Kman family, James and Angie and their two children, moved to Beverly/Morgan Park in 2019 and quickly became personally acquainted with BAPA and its initiatives. One day, not even a week after moving in, James was doing some yard work and was approached by BAPA Executive Director Mary Jo Viero. “She asked if we’d be willing to plant some trees in our parkway as part of the Openlands grant program. I volunteered to help plant trees through the neighborhood and met some terrific people working to help rebuild the native tree canopy in the Beverly/Ridge area, some of which had been lost to the ash borer. We became family members of BAPA soon thereafter,” he said.

The Kmans had heard about BAPA during the search for their home. They were impressed with the history of BAPA and its role in building the neighborhood, connecting people, and keeping neighbors involved, according to James. The family loves attending the Garden Walk, gaining inspiration for things they can try in their own yard. Angie has attended the Sip & Shop and enjoyed meeting neighbors and shop owners.

The Kmans are new to the area and initially moved here to be close to the Metra and have a backyard for the kids. “But we found so much more,” James said. “For example, in adding a new roof with solar panels, we were able to use the BAPA list of approved roofers to select a company we could trust. That might seem like a small example, but for a new family without relationships here, avoiding being scammed and finding a reputable company to preserve the integrity of our home was something that meant a lot to us.”

Living on a block with numerous long-time community members has also been invaluable to the Kmans, for they have received a warm welcome and lots of neighborhood wisdom.

“BAPA is already doing so much for this community, and we are really lucky to have such a fantastic organization right here willing to support neighbors wanting to make a difference and effect change,” James said.

In their previous Chicago neighborhood, Angie helped start a Park Advisory Council to bring a dog park to their area. The Kmans understand the incredible commitment it takes to make lasting change in a neighborhood. “As the neighborhood grows and changes and we continue to welcome in new families (like ours), it is reassuring to know that there is a dedicated group here to connect like-minded people to brainstorm new ways to come together as a community,” James said.

James is thankful that BAPA has helped lead and organize community voices, as he notes many other communities don’t have the advantages BAPA brings to the table. “BAPA provides a resource for community members to be a part of shaping their own neighborhood and giving the community a voice in conversations about what is happening with businesses, schools, and development,” he said.

Becoming a BAPA member is easy, and automatic monthly gifts are an option. Sign up at bapa.org/support.