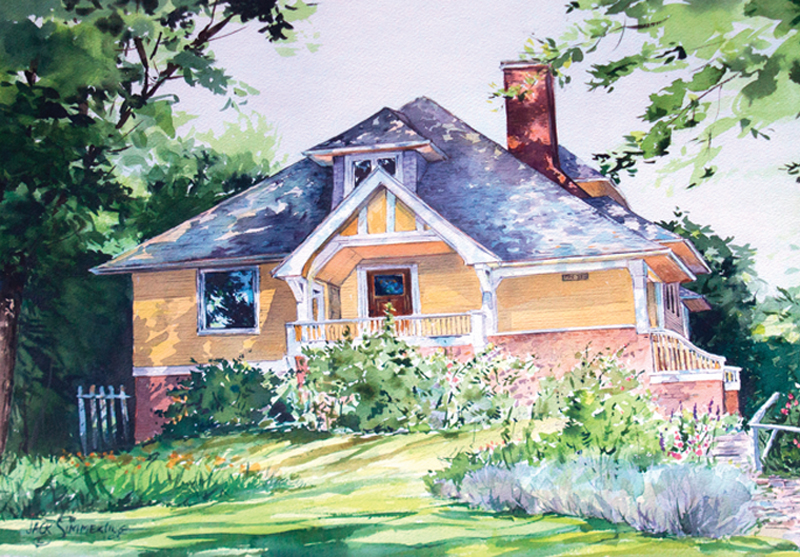 Almost everyone in Beverly/Morgan Park is familiar with the work of the late Jack Simmerling. Seeing one of his paintings or drawings on the wall makes us feel at home wherever we are. Simmerling was so much more than a local artist, he was a friend and a neighbor, one of the people who truly shaped the character of our community.

For his many contributions to the culture of our neighborhood and in recognition of his body of work that is known and appreciated internationally, the main art gallery at the Beverly Arts Center will be officially dedicated as the Jack Simmerling Gallery at the opening reception of the 40th annual Beverly Art Competition, Sat., Nov. 12, 6 to 8 p.m. A special exhibit of Simmerling’s works on loan from area residents will also open that night.

The dedication of the gallery in honor of Simmerling is a gift from the family of Ed and Lori McGunn.

“It’s important that we connect around the memory and spirit of Jack Simmerling at the Beverly Arts Center,” said Lori McGunn. “The Jack Simmerling Gallery will be a reminder of how important he was and how his work is so relatable, so much a part of our community.”

At the time that the original Beverly Arts Center was being built, Simmerling founded The Heritage Gallery and, with his wife Margie, moved their young family into the Blackwelder House, a tumbled down mansion on Prospect Avenue that they lovingly restored and transformed into a gallery of art, history and architecture. The Heritage Gallery was a hub for original art inspired by Simmerling’s love for art of architecture. Clients from the neighborhood and around the city – then around the world — responded to the artist’s skill in capturing the life infused by history into the beauty of brick and mortar.

Simmerling’s artistic talent first appeared when he was just three. His parents, Ester and John Simmerling Sr., nurtured the gift, which Simmerling crafted throughout his 77 years.

As a teenager – when most of his peers were focused on sock hops and drive-in movies — Simmerling worked on crews that were razing the amazing mansions once owned by Chicago’s leading families – Marshal Field, George Pullman, Philip Armour and others. Appalled and heartbroken by the disregard for the craftsmanship and architectural detail being callously scrapped, Simmerling began to salvage what he could and document in drawings and paintings what he couldn’t save. Simmerling’s paintings and drawings of the lost mansions are a true legacy for Chicago.

Simmerling attended the University of Notre Dame where he honed his skill as an artist. A year after graduation, he and Margie were married.

As the Simmerlings raised their family and worked on their historic home (and opened if for several BAPA Home Tours, including the very first), they became neighborhood treasures. Jack Simmerling’s gallery and reputation grew, and his love for Beverly/Morgan Park was reflected in every brushstroke.

The 40th Annual Beverly Art Competition exhibit will remain open at the BAC through Jan. 8. Jurors for the exhibit are Judie Anderson and Raymond A. Thomas, and reviewers are Fran Guichard, James Jankowiak, Christopher Jarred Jernigan, Dan McCabe.

The BAC partnered with Logan Center for the Arts at University of Chicago, South Side Community Art Center in Bronzeville, Diasporal Rhythms Art Collectors Group and Clissold Elementary School on the art competition. Competition sponsors are Beverly Bank & Trust Co., Chicago Community Trust and the Reva and David Logan Foundation.