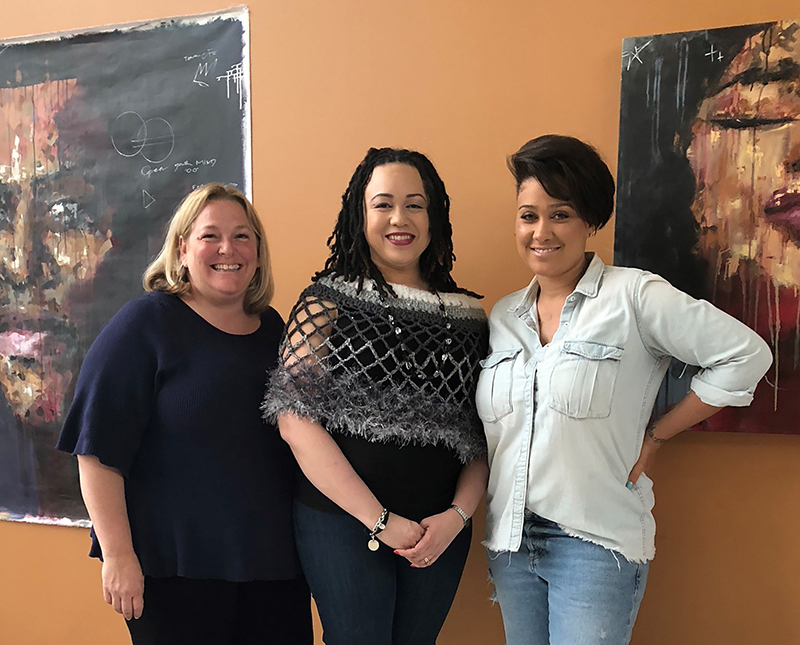 Like the majority of Facebook groups, the “Moms of Beverly” group began as a way to bring together people who share a common interest — in this case, moms who live in Beverly/Morgan Park. Over the years, the group has grown from a handful of moms to approximately 5,800, and evolved from a place to coordinate play dates to a group bridging divides to promote anti-racism.

Shanya Gray, Lauren Kent-Brown, and Tina Peterson are the current admins of the group. In light of the actions and conversations taking place around racism across the country, the admin team decided an anti-racist statement was essential to move the group’s conversations forward, stating in part: “The reality is that discussing parenting is not possible in a diverse group of women unless conversations of race and equity are had. In this group, we will not be silencing the voice of Black mothers or anyone who seeks to be heard (except if you are blatantly racist) . . . We will, through our words and actions, oppose racism in all forms and seek to actively support initiatives that seek to promote equity and unity in our community.” They asked all members to commit to anti-racism.

The “Moms of Beverly” is a place where Black moms are safe and welcomed without facing overt racism or coded language, a place for white moms to get a free education in anti-racism, and a place where all moms collectively come together to build a strong community.

“It was scary when I made the official post; I was shaking because I knew we’d started something,” Kent-Brown said. “I felt like a lot of the members weren’t aware that the group was run by two Black women, and ignorance was uncovered. I’m so proud of us for taking the stance that we did. What would we be if we’re mothers of Black boys and minority children who have this group and can say ‘look what we did and built,’ but we didn’t actually incite change in the community? Change will happen; it’s hard and scary, but worth it.”

When Gray and Kent-Brown started the group, it took some time to mold it into what they wanted it to be. The admins began coordinating in-person meetups to bring the community together in person. Various local businesses hosted the events and even agreed to give back a portion of the night’s food and drink proceeds to local public schools.

“Many of the people at these meetups were newer to Beverly and were looking for space to build a community. It was a good mix of Black and white and different races. We, at first, were hesitant to even have any conversations about race in the group,” Gray said. “I think part of it is you often find Black women and POC in predominantly white spaces are uncomfortable having these conversations. But, we decided to go there. We thought it was really important to facilitate posts that bring awareness and education about race.”

One of the biggest turning points for the group was in 2016 when Joshua Beal was shot to death in Mount Greenwood by two Chicago police officers, who were later cleared. “We addressed it then, and saw where people stood, but then it all went back to normal and we didn’t talk about race that much,” Kent-Brown said. “We decided to make a post about it and the entire group shifted from there.”

“We lost quite a few members at that time; there was a huge divide in the group as far as Black and white moms,” Peterson said. “It was disheartening that as a community that we all live in together, but we don’t live together. We decided that we’re not going to make this a comfortable space for white women anymore because there are plenty of other groups for them; we needed a place for women of color to be comfortable.”

The group faced a divide once again in 2020 during the latest discussions and protests fueled by recent occurrences of police brutality and ignorance. Just like in 2016, some members decided to leave the group, especially once the anti-racist policy was enacted. However, many women, both Black and white, began stepping up to confront racist posts.

“We created such a culture in the group that if somebody does post something racist, many of our members will condemn or take the time to educate that person,” Gray said. “Our no-nonsense policy is so refreshing, but it’s also refreshing for people of color to see that we have a lot of white allies. Black women say that our group is the only neighborhood group they’re in because they’re comfortable here. We are a diverse group of women and moms that celebrate moms of color. We don’t want members who are against us as human beings.”

When an event, action, or movement regarding people of color is widely discussed in the media, the Moms of Beverly often see a surge in membership requests. Many times, those seeking entry into the private group are not doing so with good intentions. “We want to make sure new members coming in can add value to what we have. We want to make sure that we’re not adding more people who are racist to the group. I want to be able to change people’s hearts and I do believe that there are people who want to learn and have nobody with different viewpoints that they can benefit from,” Gray said. “But then there are those who aren’t open and don’t want to have the conversations — what’s the point of continuing to give our energy to those people when we can instead state that we are an anti-racist moms group. We don’t want racism in our group; we want people to be actively anti-racist to work towards our mission of bringing moms and our community together.”

Thanks to the powerful words from the admins, many other moms felt compelled and empowered to take action. One mom coordinated the bulk purchase of more than 350 lawn signs that state, in part, “Black Lives Matter,” and another mom began an anti-racist book club specifically geared to educating white moms parenting white children. The amount of “loves” and “likes” and words of encouragement given to the anti-racist post, as well as many others that were since made by group members, demonstrate that this stance was what was needed to drive the community forward. Together.