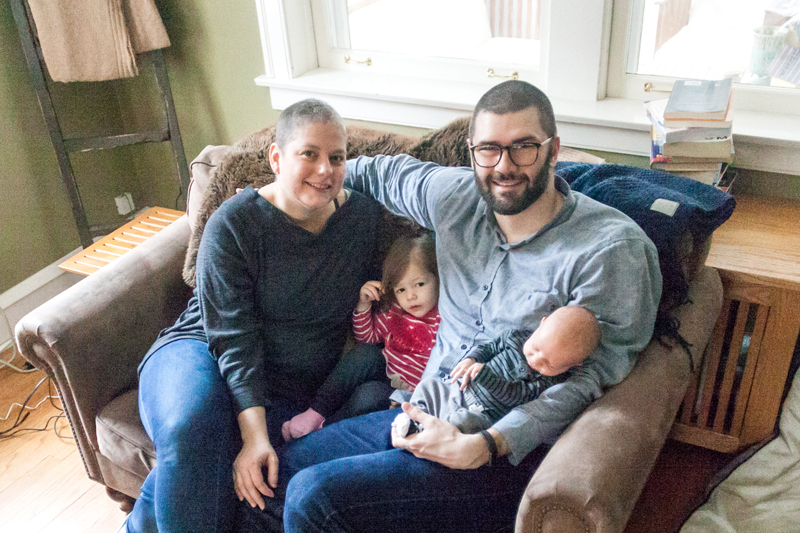 Sometimes, one simple act can create a ripple of goodwill throughout a community. One act of kindness by a local business truly made the day of one Beverly/Morgan Park mom and demonstrates the generosity that our neighborhood is known for.

Joanne Carstensen, her husband, Alex, and two-year-old daughter, Daphne, moved to Beverly/Morgan Park from Lakeview last October. As the young family settled into their new neighborhood, a pregnant Carstensen was also dealing with a breast cancer diagnosis. She shared a poignant story on the ‘Moms of Beverly’ Facebook page, where she wrote about the diagnosis she received during her first trimester of pregnancy, and the kindness of Capsule, a women’s clothing and accessories boutique at 9915 S. Walden Pkwy.

As Carstensen wrote on Facebook, “… on a day I was feeling well, my mom and I went to Capsule … My mother put a purse on hold, but I got incredibly sick and had to be hospitalized that week. My mom informed Maura [Conine, owner of Capsule] to stop holding it for us, as I would be unable to return to make a final decision. After hearing about my health, Maura and the Capsule family surprised me by dropping off a box with the beautiful purse wrapped up inside and an extremely kind card wishing my family good health and happiness for 2018. This act of kindness and generosity is one my family and I will never forget.”

When she found out about her second pregnancy, Carstensen was ecstatic, but wary when she felt a lump in her breast in June 2017. Ultimately, her doctor ordered an ultrasound and a biopsy, confirming a breast cancer diagnosis on Carstensen’s 32nd birthday in July.

Carstensen underwent a sentinel node biopsy, a lumpectomy, and four rounds of chemotherapy, the last of which was on Dec. 14, 2017, approximately one month before she was due to give birth to a boy.

On Jan. 25, 2018, Theodore Francis Carstensen was born, and his birth thrilled his entire family, all of whom have pitched in to help in any way they could. Recently, Carstensen began seven weeks of radiation. Amazingly, she was able to breastfeed baby Theo.

“I’ve learned a lot through this process, but one of the most surprising things is just how amazing a woman’s body is in adjusting to her baby’s needs,” Carstensen said. “The side effects from radiation won’t kick in for a couple of weeks, so right now the hardest part is just coming to terms with leaving my babies every day. But knowing that they are in amazing hands has helped, including my mom, mother-in-law, and nanny Katrina.”

As she fights breast cancer, Carstensen looks forward to the day when her family can get out and enjoy the neighborhood. “We were blown away by the generosity of Maura and the Capsule team, but also the kind words sent from others in the area after I posted on the ‘Moms of Beverly’ page. Our neighbors have been extremely welcoming,” she said.

“Joanne’s story resonated with me so deeply and immediately,” Conine said. “That someone so young and vibrant, a mother expecting her second baby, had to deal with something so scary and exhausting.”

Conine and another store employee, Natalie Baldacci, wanted to do something to brighten Carstensen’s day, hoping to ease her stress and worry for at least a moment. Conine called the purse designer, Primecut, and had a special-made bag, which was shipped within a week. “I wanted Joanne to understand that she is part of a wonderful community with people that are there for each other, especially during hard times,” Conine said.