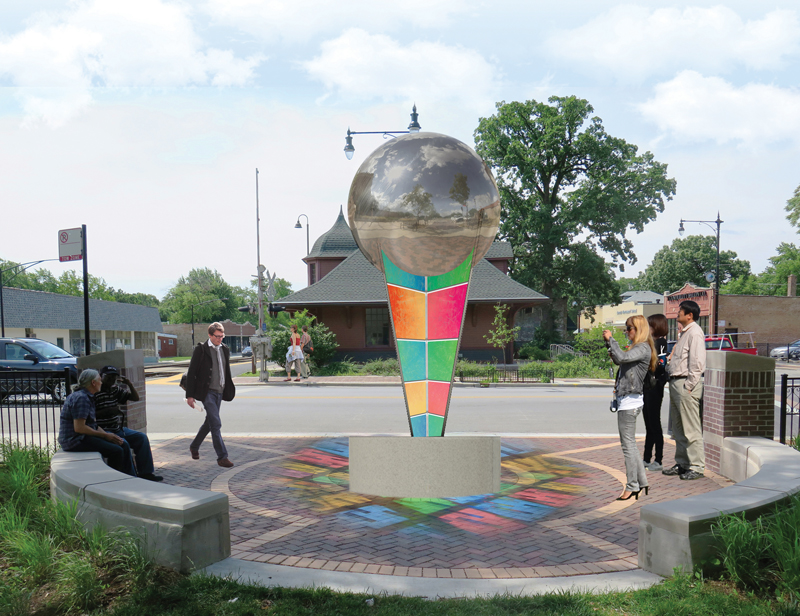 A permanent piece of public art will be unveiled at 99th and Walden Parkway in November. “Quantum Me” is an impressive sculpture fabricated from mirror polished stainless steel (similar to “Cloud Gate” — The Bean — in Millennium Park) and dichroic Plexiglas, and the creation of Chicago artist Davis McCarty. The piece is the 19th Ward’s installation through the City of Chicago’s 50×50 Neighborhood Arts Project.

“Quantum Me” will give viewers an incredible color-changing perspective on themselves and the environment.

“I was inspired by the idea of bending spacetime to jump from one location to another faster than the speed of light,” McCarty said. “If you walk around ‘Quantum Me,’ the colors will magically change before your eyes. Two people standing in different locations can actually see different colors looking at the same spot.”

McCarty explains that this phenomenon is just how sub-atomic particles behave. “We get to witness on a large scale a very amazing part of the universe through this sculpture,” he said.

The idea of teleporting is carried through McCarty’s companion piece, to be installed in Rogers Park. “Because my sculptures are book-ending the city on the north and south, they speak to each other. The idea is that you can stare into one and teleport yourself into the other,” he said. “With ‘Quantum Me,’ people will look up into a giant spherical ball that warps them into the sky. The Rogers Park sculpture is reversed; the ball is on the ground. Viewers will have a similar but different experience.”

McCarty grew up in Southeast Asia where his missionary parents started schools in Thailand and the Philippines. He moved back to the United States to attend school at Beloit College in Wisconsin. “A lot of east Asian temples influence my art. I appreciated the temple that people built that took hundreds of laborers 40-50 years to complete. I love a plain, modern design aesthetic, but I always add extra scroll work and other details to show people the time that it took to create,” he said.

Science and technology are infused within McCarty’s art. “I used to be a lot more of a nerd; I was a computer science major in college, but after doing that for a few years I realized I liked gaming but not coding,” he said. “I had a corporate job for nine years, and made the leap to full-time artist about two months ago. It was one of those things where I got two big commissions and thought ‘if there’s ever a time to do it, now is the time.'”

The sculptures for the 19th Ward and Rogers Park took McCarty about four months to complete and, because of the materials used to create them, they will last for decades.

“They will look as great in 50 years as they do today,” McCarty said. “As a society, we use images to share our experience with others. Creating a sculpture that allows people to photograph themselves in the art while simultaneously capturing the city is a great way to commemorate the experience of visiting Beverly. I hope to make people ask ‘where is that?’ and want to plan their own visit.”

McCarty’s “Quantum Me” was selected for the 19th Ward by a panel of community members, including representatives from BAPA, the Ward office, residents and artists. The project was spearheaded by the Beverly Area Arts Alliance.