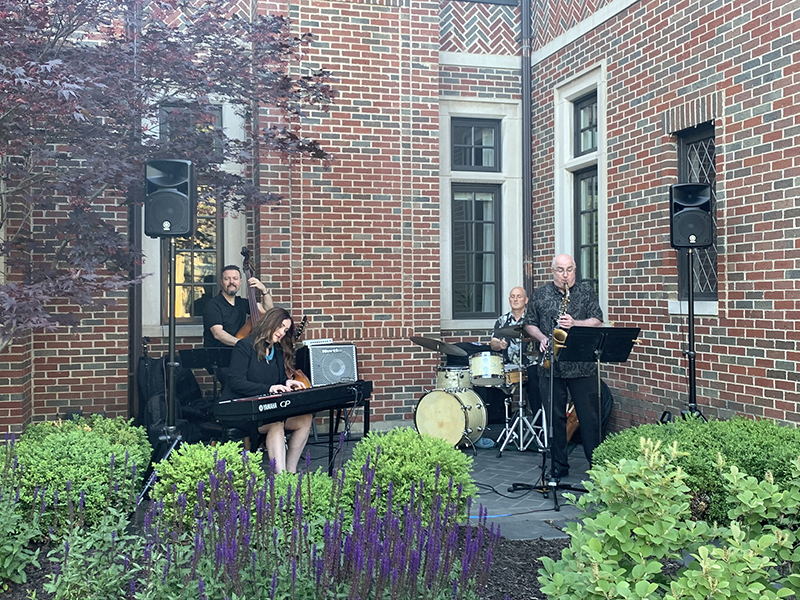 Dakarai Barclay only moved to Beverly/Morgan Park a few months ago but the young musician already has many local fans.

Barclay brought his musical talents to BAPA’s Friday Night Live Porch Concert series in July with his equally talented friends, performing together as the Dakarai Barclay Quartet. They were a big hit with the small, socially distant, audience that gathered in the large yard of the Longwood Drive home where they performed, as well as the large audience of neighbors who watched the live streamed concert on Facebook.

A 2013 graduate of Whitney Young Magnet High School and a 2017 graduate from Morehouse College as a math major, Barclay’s jazz journey began in high school. He started playing the trumpet with classical instruction, and later joined the jazz ensembles Whitney Young offered.

“I later participated in the After School Matters affiliate, Gallery 37, during my senior year under the direction of Jarrard Harris, and I continued to play in college,” Barclay said. “Most recently, I performed at the 2019 Chicago Jazz Festival and had an opportunity to play a trumpet previously owned by Miles Davis before it went to auction in October 2019.”

The Chicago Jazz Festival designates a few spots in its lineup for up-and-coming musicians on the NextGen Stage. Barclay was noticed at the Jazz Fest by someone who was working on the Miles Davis trumpet auction, who asked Barclay to play the famed trumpet for a local press feature and live at a pre-auction dinner for prospective buyers.

“The Miles Davis performance was so fun; as a trumpet player, I’ve always looked up to him as an innovator and as a musician,” Barclay said. “It was fun to step into his shoes for a night. Also, his trumpet was the best trumpet I’ve ever played on, so it was fun to window shop/test out a horn of that caliber.” For both the Jazz Fest and Miles Davis performances, Barclay played with 2014 Morgan Park High School (MPHS) alum and recent Roosevelt University graduate Nick Davis on bass.

The Dakarai Barclay Quartet that played for the BAPA concert included Nick Davis on bass; MPHS alum and current University of Louisville sophomore, Frank Morrison, on drums; and Elio Wijiya, a DePaul University music student from Indonesia, on piano.

“The Friday Night Live Porch Concert was the first time this group of friends played together — ever! I love what each member brings to the table and I plan to have a few more outdoor shows with them, either in Morgan Park or elsewhere in the city,” Barclay said.

BAPA plans to host the quartet at a porch concert in August.

Stay up to date on Barclay and the Dakarai Barclay Quartet by following him on Instagram @b_rcl_y, along with bandmates Elio Wijaya (@elioadrianow), Frank Morrison (@fmdrums), and Nick Davis (@nick_fmbs).